MR imaging has also gained rapid acceptance for cardiac eval-uation, as it does not use ionizing radiation, can provide mor- phologic and physiologic data, and can be performed to give cine-loop images.

MR imaging has also gained rapid acceptance for cardiac eval-uation, as it does not use ionizing radiation, can provide mor- phologic and physiologic data, and can be performed to give cine-loop images. MR cardiac imaging remains a challenge be-cause of the inherent difficulty of simultaneously dealing with respiratory and cardiac motion, the competing needs for spa-tial and temporal data, and the hands-on approach to tailor the examination to the specific clinical question. Thus, MR imaging is largely a problem-solving tool, rather than a screening study. The major indications for MR imaging are congenital heart disease and suspected intracardiac masses, valvular dysfunc-tion, pericardial disease, and aortic abnormality. From a func-tional standpoint, MR has the ability to asses cardiac function and motion, distinguish infarct from ischemia and help deter-mine the advisability of revascularization (Figure 3-11), and measure flow across valves or coarctations. On the research side, MR imaging has also shown some promise in measuring the degree of damage from coronary artery atherosclerosis and evaluating the composition of atherosclerotic plaque. 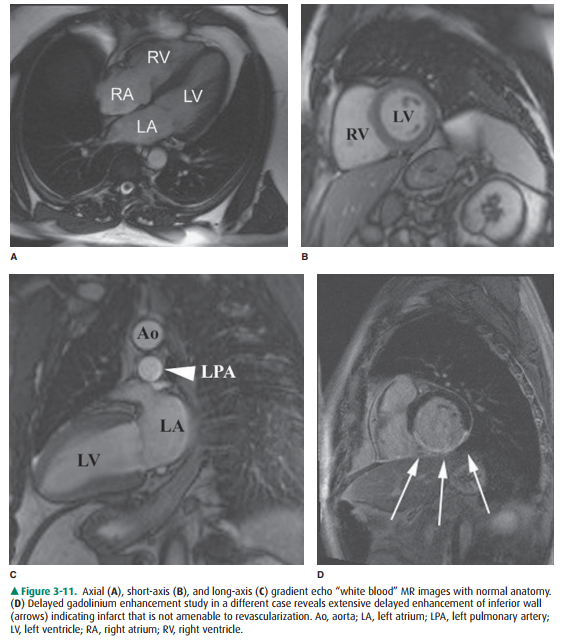 Conventional angiography is one of the most commonly per-formed imaging tests for evaluating the heart and great ves-sels. After the introduction of a catheter into a peripheral vessel (usually, the femoral or axillary vein or artery), the an-giographer, under fluoroscopic visualization, positions the catheter in the region of interest, injects contrast material to confirm the location of the catheter, and then injects larger amounts of contrast material for diagnostic purposes. This injection of contrast material can be videotaped, recorded as standard or digital radiographs, or digitally stored for later review. There are four major types of angiography: angiocardiography (heart), coronary arteriography (coronary arteries) (Figure 3-12), aortography (aorta) (Figure 3-13), and pulmonary angiography (pulmonary arteries and lungs). Techniques developed by radiologists, angiocardiography and coronary arteriography, are now almost exclusively per-formed by cardiologists. 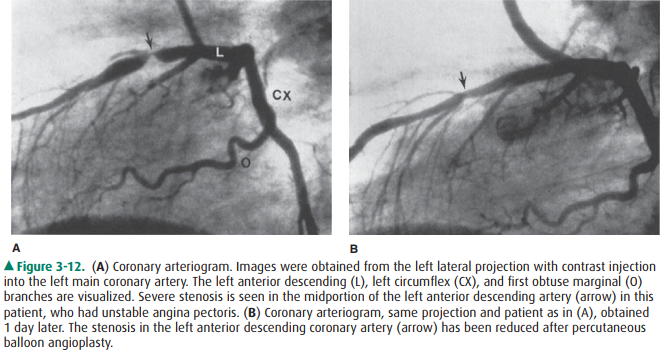 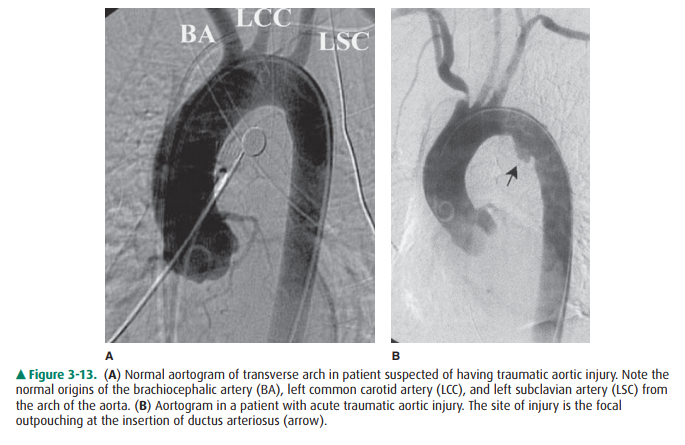