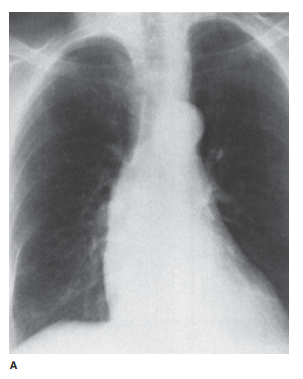 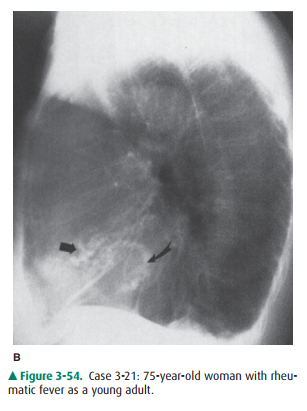 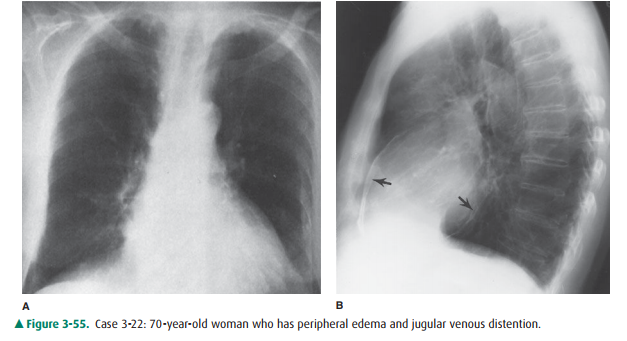 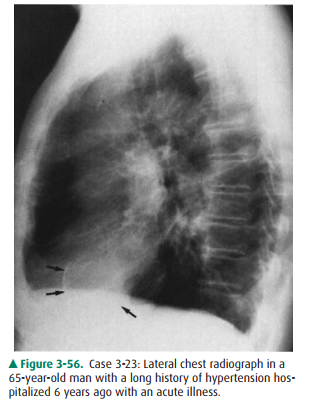 3-24. In Case 3-24 (Figure 3-57) the curved arrows point to calcification within the region of which cardiac structure? 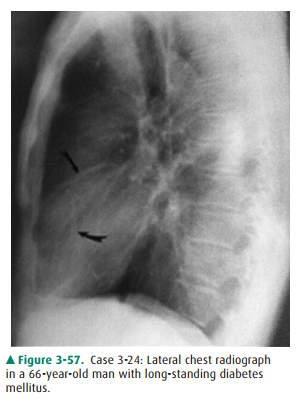 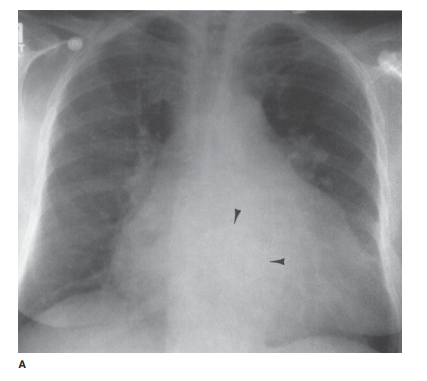 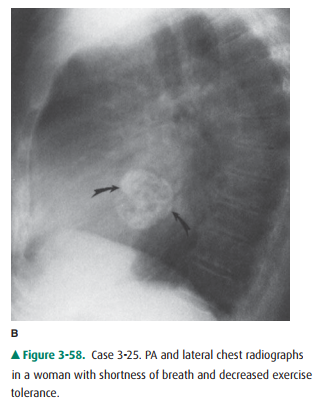 3-21. The PA and lateral chest radiographs (Figure 3-54) show curvilinear coarse calcifications in the mitral an-nulus (curve arrow) and linear calcification (straight arrow) reside in the aortic value, best seen on the lateral projection (C is the correct answer to Question 3-21).

3-22. This case (Figure 3-55) shows pericardial calcifica-tion in a woman who had viral pericarditis as a young child (B is the correct answer to Question 3-22). Note that the calcification is seen much better on the lat-eral view.

3-23. The chest radiograph in this case (Figure 3-56) shows linear calcification (arrows) in a focal area overlying the left ventricle. This calcification resides in a left ventricular aneurysm that this man developed after a myocardial infarction 6 years earlier (E is the correct answer to Question 3-23).

3-24. The lateral chest radiograph in this case (Figure 3-57) shows linear tram-track calcifications overlying the course of the coronary arteries. These calcifications represent coronary artery atherosclerosis in a patient with long-standing diabetes (D is the correct answer to Question 3-24).

3-25. In this case (Figure 3-58), a circular, heavily calcified area overlying the left atrium is seen in both the PA (arrowheads) and lateral (curved arrows) projec-tions. These calcifications resided within a left atrial myxoma that was causing the patient’s symptoms of shortness of breath and decreased exercise tolerance (B is the correct answer to Question 3-25).

Calcifications, present in almost any area of the cardiovascu-lar system, may be either metastatic or dystrophic in origin. Metastatic calcifications are usually caused by soft-tissue deposition of calcium due to hypercalcemia of any cause. Dy-strophic soft-tissue calcifications are responses to tissue in-jury or degeneration and have no metabolic cause. They can be seen in practically any of the soft-tissue components of the cardiovascular system. We concentrate -ventional chest radiograph is within the aorta, usually in elderly patients with long-standing atherosclerotic disease or di-abetes. In this instance, the calcification is linear and is asso-ciated with the aortic wall. These calcifications may also be present in aneurysms (see Figure 3-34). 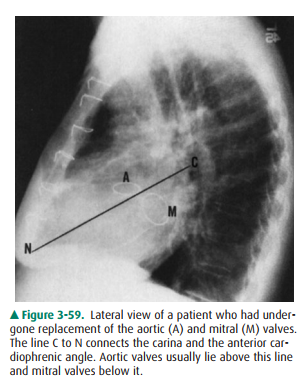 The aortic valve and mitral valve annulus are the most common intracardiac regions to demonstrate dystrophic cal-cification, usually secondary to long-standing stenosis or in-sufficiency from rheumatic fever. Bicuspid valves may also show this type of calcification. The lateral film is best for de-ciding which valve is calcified. A line drawn from the hilumobliquely and downward to intersect the anterior cardio-phrenic angle (N) will project behind aortic calcifications (A) (Figure 3-59). Calcifications that lie in back of this line are usually mitral annulus calcifications (M) (Figure 3-59). The presence of mitral annular calcification has been shown to predict the presence of carotid atherosclerosis and therefore may be associated with stroke.

Pericardial calcification as in Case 3-22 (Figure 3-55) is seen in approximately 50% of patients with constrictive peri-carditis. It has a characteristic curvilinear appearance outlin-ing the location of the pericardium and is most often seen along the right heart border (Figure 3-55).

Myocardial calcification, as is seen in left ventricular aneurysms, was discussed in the exercise on altered cardiac contour and is shown in a slightly different form in Case 3-23 (Figure 3-56). Thin, focal, linear calcifications overlying the left ventricle should be considered as aneurysms, and echocardiography, CT, and MR imaging are all useful exami-nations to confirm this diagnosis.

Case 3-25 (Figure 3-58) is an example of the rare pri-mary cardiac neoplasm that may calcify and be detected ini-tially on the plain film. The cardiac tumor that most commonly calcifies is the left atrial myxoma, and calcifica-tion occurs in about 10% of these lesions (Figure 3-58). Rarely, myocardial metastatic disease (such as osteosar-coma) or other primary cardiac tumors may calcify. Finally, primary mediastinal neoplasms such as teratomas may rarely show calcification. In these patients, CT should be performed for diagnosis.