Basic Radiology : Imaging of the Heart and Great Vessels 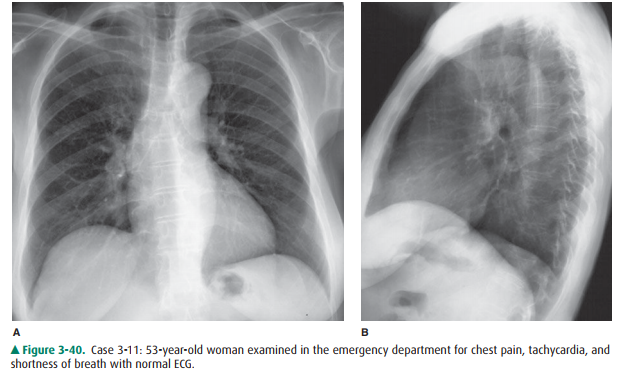 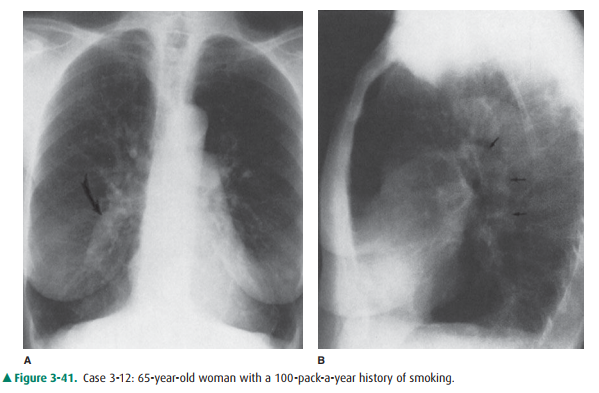 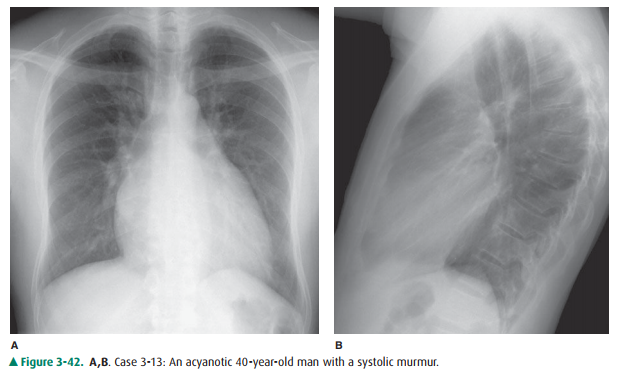 3-14.   The appearance of the pulmonary vasculature indicates that the diagnosis in Case 3-14 (Figure 3-43) isenlarged atrial appendage. 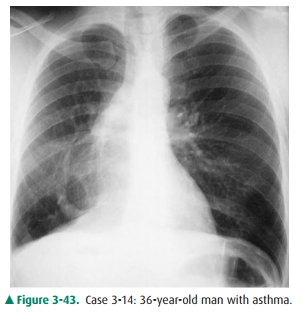 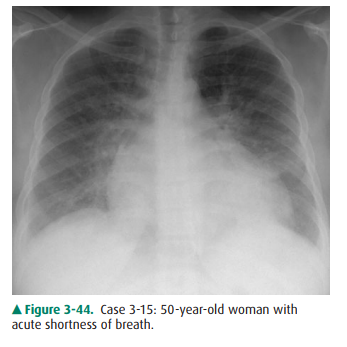 3-11. In this case (Figure 3-40), the chest radiograph was normal in a 53-year-old woman seen in the emer-gency department for left-sided chest pain. The elec-trocardiogram was also normal, and there was no obvious cause for the patient’s pain. (D is the correct answer to Question 3-11). Note the well-defined pul-monary vessels in the perihilar region and normal branching of these vessels into the lungs. There is a gradient of pulmonary vascular markings from the bases to the apices on an upright radiograph due to the increased perfusion to the lower lobes. No pulmonary parenchymal abnormalities are present to support the other diagnoses. It should be noted that the chest radiograph is often normal in myocardial infarction, and a normal chest x-ray does not exclude intrinsic cardiac disease per se.

3-13. This case (Figure 3-42) shows increased pulmonary vascularity in a 40-year-old patient with VSD (C is the correct answer to Question 3-13). Note the large central pulmonary arteries, the increased linear opac-ities radiating out into the lungs, and the relatively uniform distribution of the pulmonary vascular shadows. In individuals with long-standing intracar-diac shunts and pulmonary hypertension, the pul-monary arterial resistance may exceed systemic pressures, resulting in Eisenmenger’s physiology, a re-versal of an intracardiac shunt from L R to R L.

3-14. This case (Figure 3-43) shows the characteristic appearance of venolobar (scimitar) syndrome (B is the correct answer to Question 3-14). The scimitar vein is the result of partial anomalous pulmonary venous return.

3-15. This case (Figure 3-44) is an example of a pulmonary edema due to fluid overload and congestive heart failure (A is the correct answer to Question 3-15). Note the increased size of the cardiac silhouette, the ill-defined reticular perihilar air-space opacities, the enlargement of the vascular pedicle, and the redistri-bution of blood flow to the upper lung zones.

The main pulmonary arteries are large, the lobar arteries smaller, and each branching segment becomes progres-sively smaller. As the vasculature tree ramifies, the arteries are closely related to the adjacent bronchus and are ap-proximately the same size. On the chest radiograph, this pattern is manifest by linear opacities or shadows that are much more prominent in the central portion of the chest and gradually become less prominent toward the periphery of the lung, as in the normal person in Case 3-11. The right descending pulmonary artery is one important landmark on the PA chest film (see Figure 3-1). In the normal chest, the lateral border of the RDPA is usually well demarcated, and the artery usually measures less than 15 mm in its widest diameter. 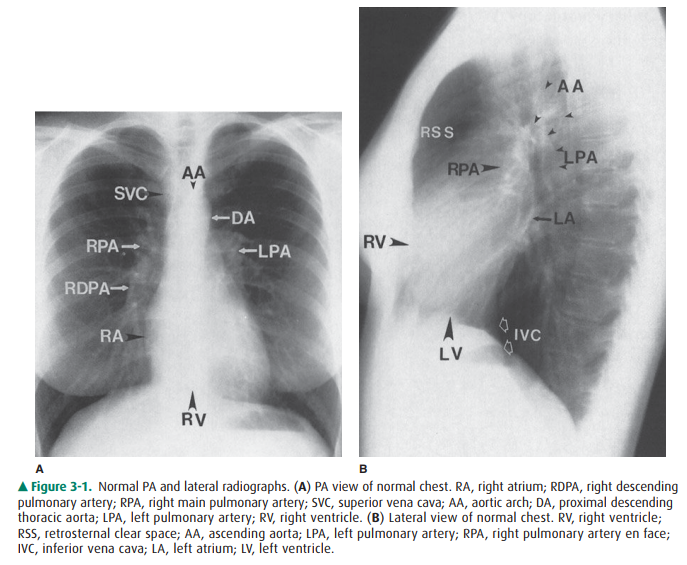 Enlargement of the pulmonary vessels is caused by a vari-ety of abnormalities (see Table 3-5). Chronic obstructive pul-monary disease, with resultant pulmonary hypertension, is the most common cause of pulmonary arterial hypertension and is shown in the patient in Case 3-12 (Figure 3-41). 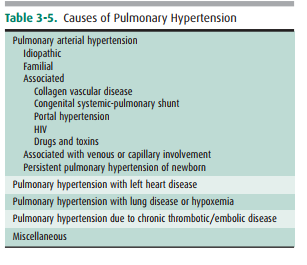 One other common cause of pulmonary artery enlarge-ment is mitral disease (either stenosis or regurgitation). In this case, increasing left atrial pressures are transmitted to the pulmonary veins. In time, this raises pulmonary capillary wedge pressures and eventually right heart pressures, similar to cor pulmonale from left heart failure (see Case 3-7).

Venolobar syndrome is a form of partial anomalous pul-monary venous return. Note the right inferior pulmonary vein descending in a curvilinear fashion to empty into the in-ferior vena cava (Figures 3-43 and 3-45). Right lung hypopla-sia causes the small size of the right hemithorax and results in shift of the heart and mediastinum to the right. Other con-genital anomalies may be present. 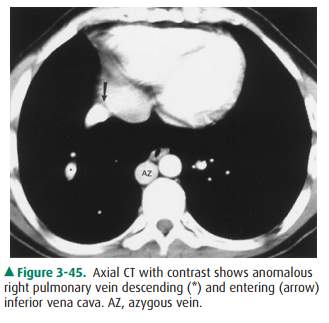 Pulmonary edema, as exhibited in Case 3-15 (Figure 3-44), regardless of the cause, is another process that causes the in-crease in the pulmonary vascularity seen on chest radiograph. Perihilar indistinct-ness, caused by interstitial edema, may obliterate the borders of the pulmonary vessels. Associated findings are redistribution of blood flow to the apices, engorgement of the central veins, Kerley’s B-lines, and pleural effusions (see Figure 3-31).