There is a wide array of imaging tests that can be used to eval-uate the cardiovascular system.

There is a wide array of imaging tests that can be used to eval-uate the cardiovascular system (see Table 3-1). After a thor-ough history and physical examination, the initial screening study should always be a chest radiograph. Ideally, the PA and lateral views should be obtained with maximum inspiration. This study gives important information about the cardiac contour and the status of the lungs, and it is a good examina-tion for excluding disorders that would require immediate treatment, such as pneumothorax. Furthermore, evaluation of the chest radiograph can often lead to a specific diagnosis and treatment, such as in congestive heart failure, or can help determine the need for another imaging study. Depending on the history and physical examination find-ings, echocardiography, nuclear cardiac imaging, CT, MR, or conventional coronary angiography may follow. Echocardiog-raphy is a good screening test to assess cardiac and great-vessel valvular motion and structural abnormalities, cardiac cham-ber morphology, and flow. Angiography delineates the struc-tural status of the coronary arteries and can give information on blood flow through the cardiac chambers, valves, and prox-imal great vessels, mainly in patients with suspected athero-sclerosis. It is also used to guide interventions such as stent placement in the coronary arteries. Because of its inherent risks, coronary arteriography is usually reserved for patients with signs and symptoms of myocardial ischemia or infarction on the basis either of history or of results of electrocardiogra-phy, echocardiography, or radionuclide myocardial imaging. 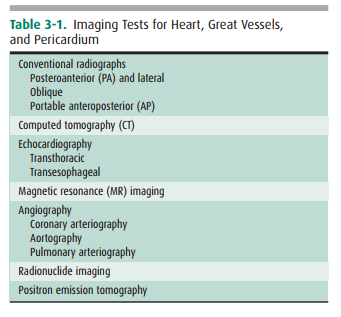 In patients with suspected pulmonary emboli, helical CT is the most appropriate test in the setting of an abnormal chest x-ray (Figure 3-14). The ventilation-perfusion (V/Q) scan can be performed if the chest radiograph is normal and is also the preferred examination in young females because of the radiation dose to the breast by CT. Both of these tests can confirm the clinically suspected diagnosis of pulmonary em-bolic disease and often provide a useful “map” of the most suspicious regions of the lung for the angiographer if an an-giogram is required for the definitive diagnosis of pulmonary embolism. CT can also detect important alternative diag-noses not detected by either V/Q scan or pulmonary angiog-raphy. More frequently, patients with atypical chest pain are being referred for the triple rule-out examination. This test is not appropriate for patients with clear signs or symptoms of myocardial ischemia and should be reserved for intermediate-to low-risk patients with a nondiagnostic ECG and negative first set of troponins. 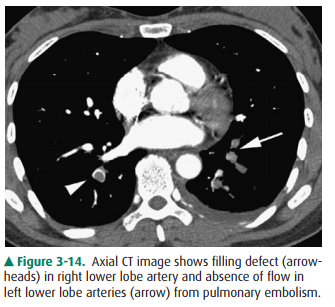 Echocardiography, MR imaging, or CT or cardiac angiog-raphy may be selected for patients with suspected congenital heart disease. The advantages of MR imaging in this setting is that it is noninvasive, generally needs no contrast material ad-ministration, and uses no ionizing radiation, an important consideration in the pediatric patient. For these reasons, MR imaging has become the preferred imaging test in the pediatric population. As dose reduction techniques have improved, the use of CT for congenital heart disease has also increased.

Suspected aortic dissection (either atherosclerotic or traumatic in origin) can be evaluated by helical CT, TEE, aortography, or MR imaging. Helical CT is the imaging modality of choice for acute dissection because of its accu-racy and availability (Figure 3-15). With multislice technol-ogy, CT angiography can provide images in multiple planes to show the relation of the dissection to key branch vessels. TEE has the advantages of being quick and noninvasive, and the examination can be performed expediently at the bed-side. MR imaging is noninvasive, uses no ionizing radiation, is less operator-dependent, and can be performed in multi-ple planes. It is limited by availability and imaging time and because it cannot be used in patients with certain implanted devices, particularly pacemakers. Angiography has mostly been relegated to minimally invasive treatments such as stent-graft placement. Because survival rates often depend on early surgical intervention, availability and timeliness of the examinations is important. 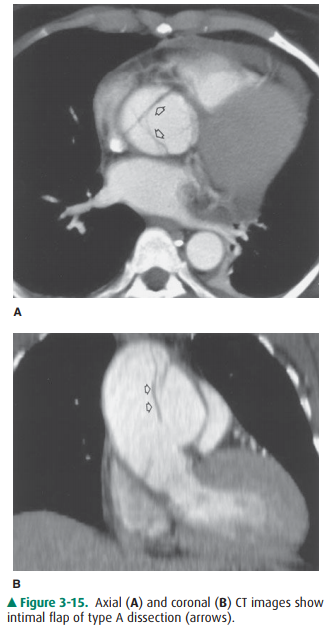 In patients whose chest radiographs suggest intrinsic pul-monary or mediastinal processes, a standard chest CT is cur-rently the preferred modality. The use of contrast depends on the indication, the preference of the radiologist, and any pos-sible contraindications to administration of intravenous con-trast for individual patients.

Finally, regardless of the situation, it is reasonable for the clinician and radiologist to decide together which imaging tests are most appropriate. In many instances, the choice of the next most efficacious and least costly imaging examina-tion is not always clear-cut. In fact, in some circumstances, it is not necessary to perform another test because of the lim-ited potential yield from the examination or because there is no adequate therapy for the suspected abnormality. It is hoped that future recommendations for test selection will be determined by well-designed prospective unbiased outcome studies comparing all of these modalities in various clinical scenarios. In the meantime, a commonsense approach, tak-ing into consideration the history and physical examination findings, the information gleaned from the conventional ra-diograph, and the potential yield from the array of other available imaging tests, is the most appropriate. In all in-stances, communication between the clinician and radiolo-gist is critical for the best patient care.

In clinical hospital practice, particularly in the ICU setting, a variety of catheters and tubes are used to monitor various parameters in patients (Figure 3-16). The student should be familiar with the normal routes and positions of these de-vices, as well as inappropriate positions and complications. Table 3-3 lists the most common monitoring devices. 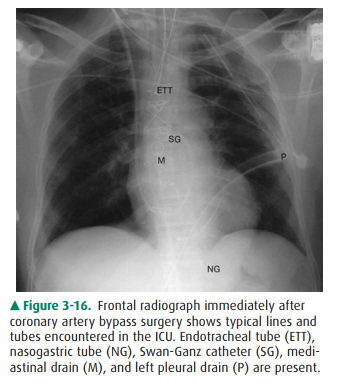 The basic venous anatomy of the upper mediastinum should be reviewed and kept in mind when evaluating catheter placement. The most common routes of catheter insertion in the chest include the internal jugular and subclavian veins. Ra-diographs obtained after insertion show the catheter following the course of either the internal jugular or subclavian vein and passing through the brachiocephalic vein. It then curves gently downward to terminate in the superior vena cava proximal to the right atrium (Figure 3-17). One normal variation of ve-nous anatomy is the persistent left superior vena cava. In this situation the catheter descends down the left mediastinum ter-minating in the left SVC. The left SVC ultimately drains into the coronary sinus, which then enters the right atrium. 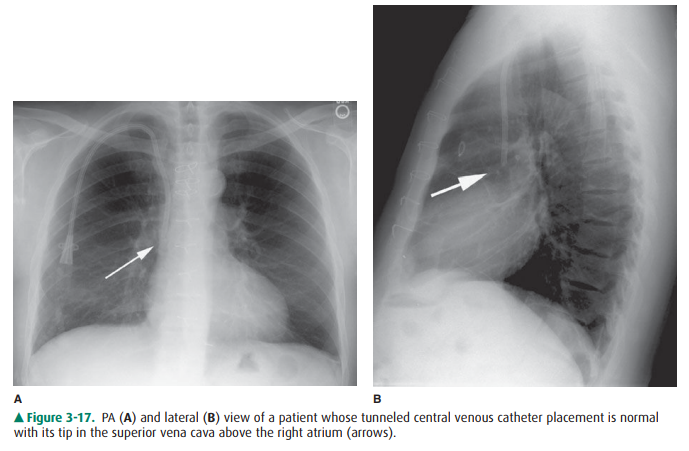 Intrathoracic central venous catheters are used mainly for monitoring central venous pressure (CVP), maintaining proper nutrition, delivering medication, and hemodialysis. It is standard practice to request a chest radiograph after catheter placement to verify its location (Figure 3-18) and to check for potential complications, such as pneumothorax (Figure 3-19) or hemothorax. Measurement of CVP is opti-mally obtained when the tip of the catheter is proximal to the right atrium and distal to the most proximal valves of the large veins. A catheter tip proximal to the veins gives an inaccuratereading of CVP, and a tip too close to the right atrium may cause arrhythmias from irritation of the right atrial my-ocardium. The reason for catheter insertion is critical for iden-tifying its appropriate position. If it has been placed just for fluids and/or medications, a termination in the brachio-cephalic vein is satisfactory. Conversely, a plasmapheresis catheter should never be located in the right atrium because of the risk of complications. More frequently, central venous catheters are being placed centrally via a peripheral vein. Thesecatheters have minimal risk, can remain in place for longer pe-riods of time without being exchanged, and are primarily used for the delivery of fluids and long-term antibiotics. 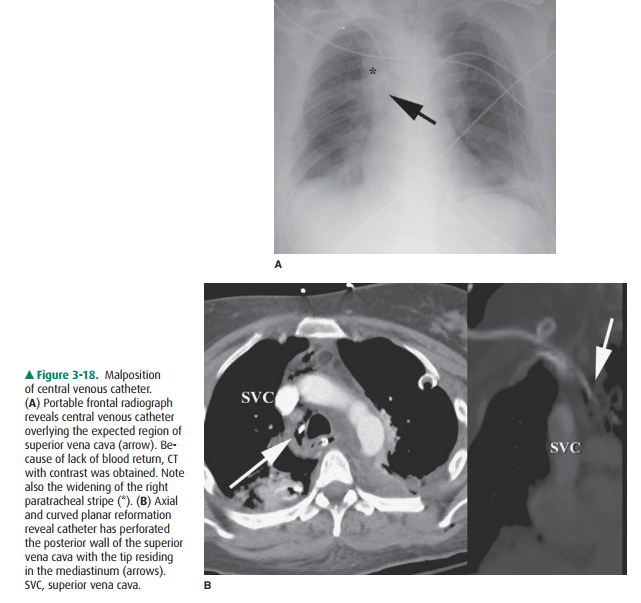 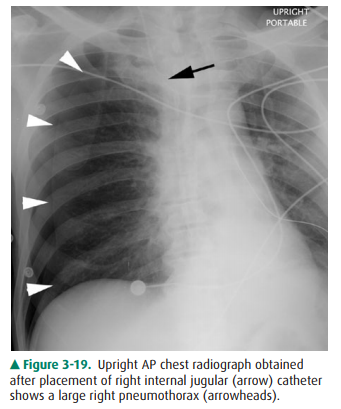 The major potential complications from catheter place-ment are outlined in Table 3-4. A malpositioned central ve-nous catheter may result in inaccurate CVP measurement, thrombosis, catheter knotting, and infusion of substances into the mediastinum or pleura. Catheter tips against the wall of the SVC may erode into the mediastinum or may extendretrograde into tributary veins, particularly the azygous vein (Figure 3-20). 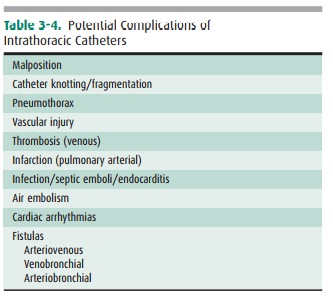 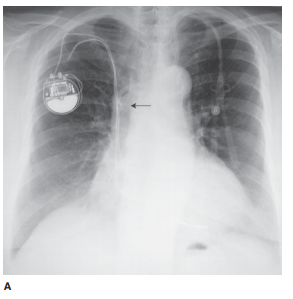 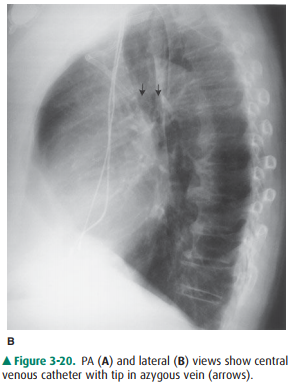 Flow-directed arterial catheters are also regularly used in cardiac and ICU patients to monitor cardiac output. The most common flow-directed catheter is the Swan-Ganz (SG) catheter (see Figure 3-16). It is usually inserted percutaneouslyinto the left or right subclavian vein and threaded through the brachiocephalic vein, superior vena cava, right atrium, tricus-pid valve, right ventricle, pulmonic valve, and directed out into the main pulmonary artery. Usually terminating in the right or left pulmonary arteries, the SG tip should be distal to the pulmonary valve and proximal to the smaller pulmonary ar-terial vessels so it will not cause occlusion and, potentially, thrombosis. A simple rule of thumb is that the catheter should not extend past the mediastinal borders. It may then be intermittently “wedged” into a distal pulmonary artery branch to obtain a pulmonary capillary wedge pressure. 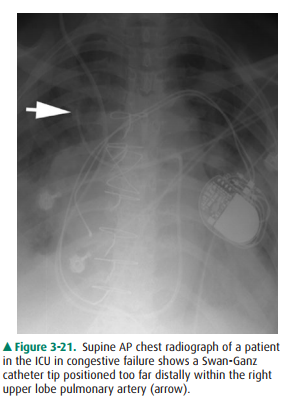 Complications of SG catheter placement are similar to those with other central venous catheters. The tip may be po-sitioned in a number of inappropriate vessels or locations, and a chest radiograph should be obtained after catheter in-sertion to confirm its position (Figure 3-21). Introduction of any catheter into the subclavian vein, because of its close proximity to the lung apex, can cause pneumothorax (see Figure 3-19). A catheter tip position in the right ventricle can lead to ventricular arrhythmias, and leaving the catheter tip too distal may result in a pulmonary artery pseudoaneurysm or pulmonary infarct.

An intraaortic counterpulsation balloon pump (IABP) is occasionally used in patients with cardiogenic shock. This catheter measures approximately 26 cm in length and is sur-rounded by a balloon, which inflates with helium or carbon dioxide gas during diastole and deflates during systole. Defla-tion during systole decreases afterload and results in dimin- ished left ventricular work and oxygen requirements, while the inflation of the balloon during diastole increases cardiac pressure to help ensure adequate perfusion of the coronary arteries. The catheter, introduced percutaneously into the thoracic aorta via the common femoral artery or placed into the ascending aorta at the time of surgery, should be posi-tioned so that its tip is just distal to the origin of the left sub-clavian artery. The tip of the catheter has a small radiopaque marker so that this position can be ascertained on the chest radiograph (Figure 3-22). The major complications of the IAPB result from positioning of its tip proximal to the left subclavian artery, which may cause occlusion of the left sub-clavian vessel orifice, cerebral artery embolization, or aortic tear. If positioned too low, the balloon may occlude the celiac, superior mesenteric, and renal arteries. 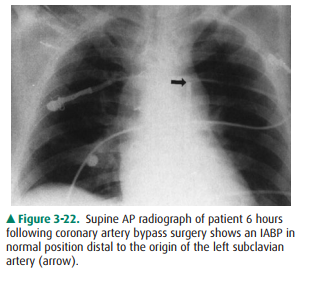 Unipolar or bipolar pacemakers are most common and are usually implanted in the chest wall with leads inserted into the subclavian vein. The unipolar pacemaker tip is normally situated at the apex of the right ventricle. The bipolar pacemaker has a proximal lead that terminates in the right atrium and a distal lead that terminates within the right ventricle (similar to the unipolar pacemaker posi-tion). Biventricular pacemakers have a third lead present in the coronary sinus, appearing superior to the right ventric-ular lead (Figure 3-23). Its posterior position can be con-firmed on the lateral view. Pacemakers that also have the ability to act as defibrillators have larger leads with a coil spring appearance. Leads are usually placed from a transve-nous approach, although in certain circumstances they can be placed directly on the epicardium through the chest wall. The purpose of the chest radiograph after the pace-maker insertion is to document the appropriate placement of these leads, to check for complications from placement, and to establish a baseline examination to compare with future chest radiographs. 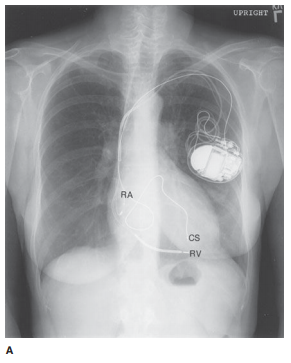 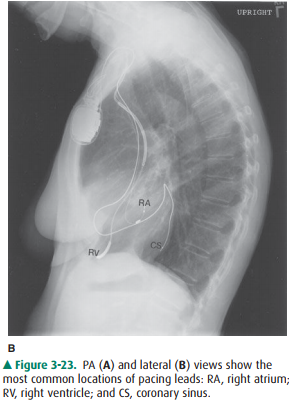