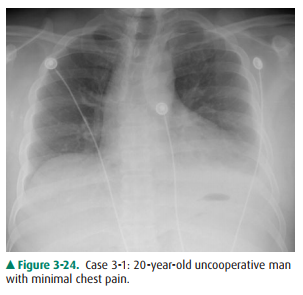 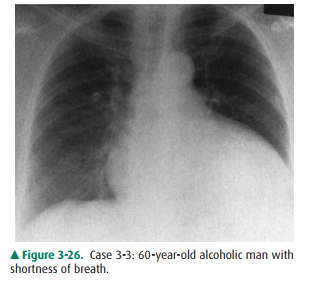 B. intracardiac shunts (ASD and VSD) 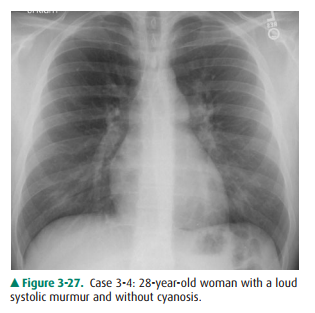 3-1. This case (Figure 3-24) represents an apparent “en-larged heart” due to an expiratory phase of respiration in an uncooperative patient (D is the correct answer to Question 3-1). Note the decreased lung volumes and the elevation of the hemidiaphragms. The result-ant crowding of vessels obscures much of the cardiac border. The technique of inspiratory PA radiograph is preferred to avoid “diagnosing” diseases that a patient does not have.

3-2. This case (Figure 3-25) is an example of pericardial effusion (arrowheads) (C is the correct answer to Question 3-2). The conventional radiograph findings on the frontal view are the so-called globular or water-bottle configuration of the heart.

3-3. This case (Figure 3-26) shows similar radiographic findings as in Case 3-2. This is the case of cardiomy-opathy (C is the correct answer to Question 3-3).

3-4. This patient (Figure 3-27) has cardiomegaly, increased pulmonary vascularity, and prominent pulmonaryarteries, findings suggestive of an intracardiac shunt, which in this case was an atrial septal defect (ASD) (C is the correct answer to Question 3-4). The lateral radiograph (Figure 3-29) shows the enlarged central pulmonary arteries and right ventricular prominence due to increased flow.

3-5. This case (Figure 3-28A) illustrates cardiomegaly, increased pulmonary vascularity, redistribution of blood flow to the upper lobes, and Kerley’s B-lines typical of pulmonary edema (B is the correct an-swer to Question 3-5). Note the normal radiograph 1 month prior (Figure 3-28B).

Pericardial effusion and cardiomyopathy have similar appear-ances on PA chest radiographs (Cases 3-2 and 3-3). This ap-pearance is often referred to as a globular shape or a water-bottle heart. When this appearance is observed, an echocardiogram is the next best imaging test to differentiate between these two en-tities. However, this diagnosis may be suggested on the lateral radiograph by a separation of the pericardial and epicardial fat by pericardial fluid, as exhibited in Figure 3-25B (arrowheads). Additionally, the presence or absence of pulmonary edema may sometimes assist in the diagnosis. As a rule of thumb, pericardial effusions do not result in pulmonary edema, and therefore thepresence of edema should lead one to favor dilated cardiomy-opathy. Mediastinal masses may occur in a location or a distri-bution that makes the heart appear enlarged on the chest radiograph. CT is the next best test to confirm a clinical suspi-cion of a mass and to evaluate mediastinal adenopathy.

Ebstein’s anomaly, mentioned in Question 3-4, is an un-common type of congenital heart disease that may also result in a globular appearance of the heart on the chest radiograph (Figure 3-30A). In these patients, the tricuspid valve is displaced downward, resulting in tricuspid regurgitation (Figure 3-30B). There is usually an associated ASD. The tricuspid insufficiency results in a massively enlarged right atrium, and the pulmonary vascularity is usually diminished due to decreased flow through the pulmonary arteries. These patients often present with con-gestive failure early in life, and echocardiography, MR imaging or cardiac angiography is necessary to make this diagnosis.

Increased heart size is a common clinical problem that may be caused by a variety of abnormalities. Cardiac enlarge-ment may be diagnosed if the cardiothoracic ratio is greater than 60%. Often the lateral view is helpful for confirming left atrial and left ventricular enlargement. The most common cause of enlargement is atherosclerotic disease, although a number of other entities may cause an increased cardiac sil-houette. In congestive heart failure (CHF), hydrostatic forces result in fluid collection in the interlobular septa, those con-nective tissue sheaths, veins, and lymphatics surrounding the secondary pulmonary lobule (Figure 3-31, arrows). As hydrostatic pressures increase, fluid may then accumulate in the alveoli giving an air-space pattern of disease. Intracardiac shunts, especially ventricular septal defect (VSD), can also cause cardiac enlargement because of the increased flow from the internal shunting. VSD is the most common congenital cardiac anomaly, and the intracardiac shunt must be at least 2 to 1 for the radiograph to show recognizable changes.