Experiments carried out with hapten-carrier complexes have contributed significantly to our understanding of T-B lymphocyte cooperation. A

Experiments carried out with hapten-carrier complexes have contributed significantly to our understanding of T-B lymphocyte cooperation. A specific example is illustrated in Fig-ure 4.2. Mice primed with a hapten-carrier conjugate prepared by chemically coupling the 2-dinitrophenyl (2-DNP) radical to egg albumin (ovalbumin, OVA) produced antibodies both to DNP and OVA. Antibodies to the hapten (DNP) were not observed when mice were immunized with DNP alone or with a mixture of DNP and OVA not chemically linked. Secondary challenge of mice primed with DNP-OVA with the same hapten-carrier conju-gate triggered an anamnestic or “recall” response of higher magnitude against both hapten and carrier.

In contrast, if the DNP-OVA–primed animals were challenged with the same hapten coupled to a different carrier, such as bovine gamma globulin (DNP-BGG), the en-suing response to DNP was of identical magnitude to that observed after the first immu-nization with DNP-OVA (Fig. 4.2). The conclusion from these observations is that a “re-call” response to the hapten can only be observed when the animal is repeatedly immunized with the same hapten-carrier conjugate. 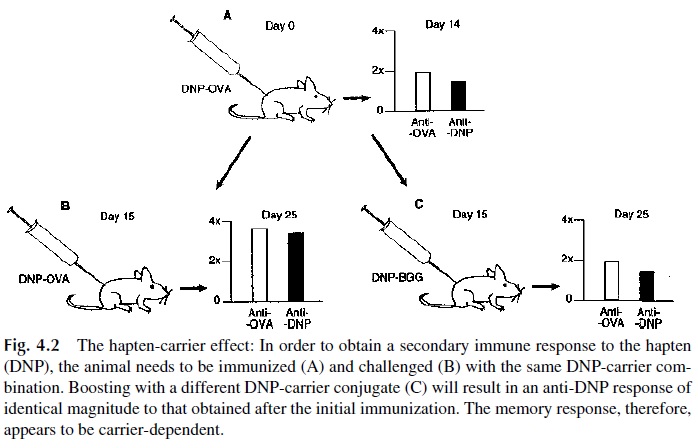 It was further observed that if mice were primed with the carrier ovalbumin alone and then challenged with DNP-OVA, the response to DNP was as high as that observed when mice had been primed with DNP-OVA (Fig. 4.3). When OVA-primed mice were chal-lenged with a mixture of not chemically linked DNP and OVA, the response to DNP was not observed. Thus it was concluded that immunological “memory” (defined in this case as a response of the magnitude characteristic of a secondary response) to the hapten moiety of a hapten-carrier conjugate is exclusively dependent on a previous exposure to the carrier moiety. In other words, the factors responsible for the secondary immune response were ef-fective in enhancing the response to any hapten coupled to the immunizing carrier. 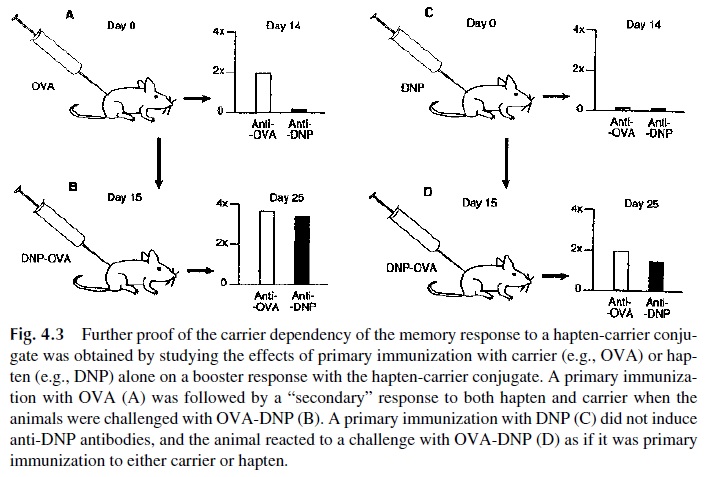 The hapten-carrier experiments were later repeated using sublethally irradiated in-bred mice reconstituted with different cell subpopulations from immunocompetent animals of the same strain. Four groups of animals used as a source of reconstituting cells. Mice were immunized with DNP or with two different immunogenic proteins, such as keyhole limpet hemocyanin (KLH) and OVA; a fourth group was injected with saline (see Fig. 4.4). T and B lymphocytes were purified from the immunized animals and transferred to the sub-lethally irradiated mice of the same strain. Several observations were made:

1. If both DNP-primed B lymphocytes and OVA-primed T lymphocytes were transferred to sublethally irradiated recipients, the reconstituted mice produced relatively large amounts of anti-DNP antibody upon challenge with DNP-OVA. 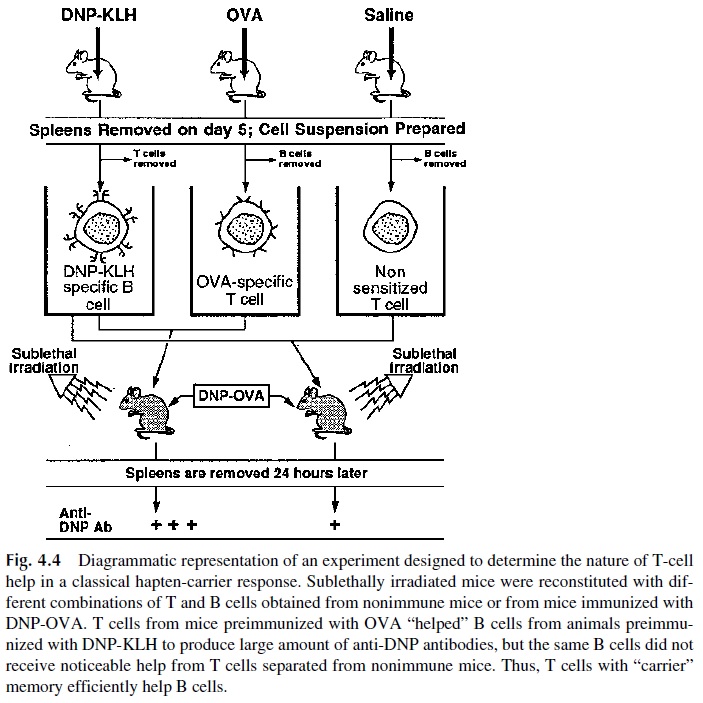 These experiments demonstrated that the amplification of the B-cell response re-quired T cells. Additionally, both carrier- and hapten-specific antibody-producing cells were “helped” by carrier-specific T lymphocytes. In other words, T-lymphocyte “help” is not antigen-specific, since the T and B lymphocytes collaborating in the immune response may recognize antigenic determinants from totally unrelated compounds (hapten and car-rier).

A consistent observation in all hapten-carrier observations is that the efficient col-laboration between T and B lymphocytes requires that the antigenic determinants for each cell type must be on the same molecule. This suggests that the helper effect is most effi-cient if the collaborating B and T lymphocytes are brought into intimate, cell-to-cell con-tact, with each cell reacting to distinct determinants on the same molecule.

In the last two decades the hapten-carrier concept has found significant applications in medicine. Hapten-carrier systems have been developed to raise antibodies to a variety of nonimmunogenic chemicals that are the basis for a variety of drug-level assays (e.g., plasma cyclosporine levels). Lastly, the immune response to haptens coupled to autologous carriers has been demonstrated to be the pathological basis for some abnormal immune re-actions, including some drug allergies. For instance, the spontaneous coupling of the peni-cilloyl derivative of penicillin to a host protein is believed to be the first step toward de-veloping hypersensitivity to penicillin. Hypersensitivity reactions to a number of drugs, chemicals, and metals are believed to result from spontaneous coupling of these nonimmunogenic compounds to endogenous proteins, which are modified as a consequence of the chemical reaction with the hapten. As a consequence, the conditions necessary for the elicitation of immune responses to nonimmunogenic compounds are created.