As noted above, most immunogens are complex molecules (mostly proteins and polysac-charides).

As noted above, most immunogens are complex molecules (mostly proteins and polysac-charides). However, only a restricted portion of the antigen molecule—known as an anti-genic determinant or epitope—is able to interact with the specific binding site of a B-lym-phocyte membrane immunoglobulin, a soluble antibody, or a T-lymphocyte antigen receptor.

While B lymphocytes recognize epitopes expressed by unmodified, native molecules, T lymphocytes recognize short peptides generated by antigen processing (i.e., intracellular cleaving of large proteins into short peptides) or derived from newly synthe-sized proteins cleaved in the cytoplasm. These oligopeptides are newly formed and have little or no three-dimensional homology with the epitopes expressed on native proteins.

Studies with x-ray crystallography and two-dimensional nuclear magnetic resonance have resulted in the detailed characterization of B-cell epitopes presented by some small proteins, such as lysozyme, in their native configuration. From such studies the following rules have been derived for antibody-antigen recognition:

1. Most epitopes are defined by a series of 15–22 amino acids located on discon-tinuous segments of the polypeptide chain, forming a roughly flat area with peaks and valleys that establish contact with the folded hypervariable regions of the antibody heavy and light chains.

2. Specific regions of the epitope constituted by a few amino acids bind with greater affinity to specific areas of the antibody binding site, and thus are pri-marily responsible for the specificity of antigen-antibody interaction. On the other hand, the antibody binding site has some degree of flexibility that opti-mizes the fit with the corresponding epitope.

3. A polypeptide with 100 amino acids may have as many as 14–20 nonoverlapping epitopes. However, a typical 100-amino-acid globular protein is folded over it-self, and most of its structure is hidden from the outside. Usually only surface epitopes will be accessible for recognition by B lymphocytes and for interactions with antibodies (Fig. 4.1). 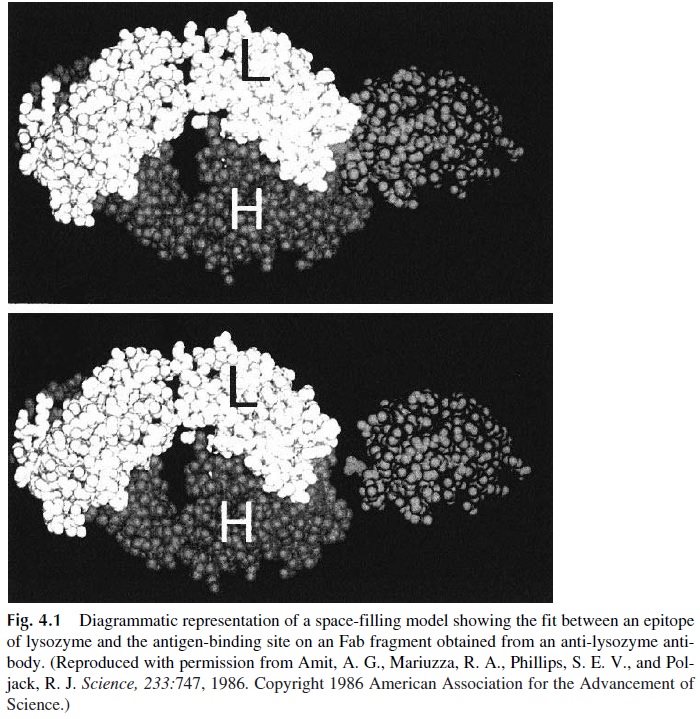