If an APC is infected by an intracellular organism (virus, bacteria, or parasite), the infecting agent will multiply in the cytosol.

If an APC is infected by an intracellular organism (virus, bacteria, or parasite), the infecting agent will multiply in the cytosol. Peptides derived from mi-crobial proteins are loaded onto MHC-I molecules, transported to the cell surface, and pre-sented to cytotoxic T lymphocytes (CTL). CTL are a special population of effector T cells capable of killing target cells bearing specific antigen and are largely CD8+ .

The way in which MHC I molecules and viral peptides become associated has re-cently been elucidated (Fig. 4.9). Upon infection, intracellular microbes start to produce their own proteins. Some of the nascent microbial proteins diffuse into the cytoplasm, where they become associated with degradative enzymes forming a peptide-enzyme com-plex (proteasome). In these complexes, the protein is partially digested, and the resulting peptides bind to specialized proteins (transporters associated with antigen processing, TAP), which deliver them to the endoplasmic reticulum, the site of MHC-I synthesis and assembly. In the endoplasmic reticulum, the viral peptides bind to newly synthesized MHC class I molecules, and the resulting MHC–viral peptide complex is transported to the mem-brane of the infected cell. 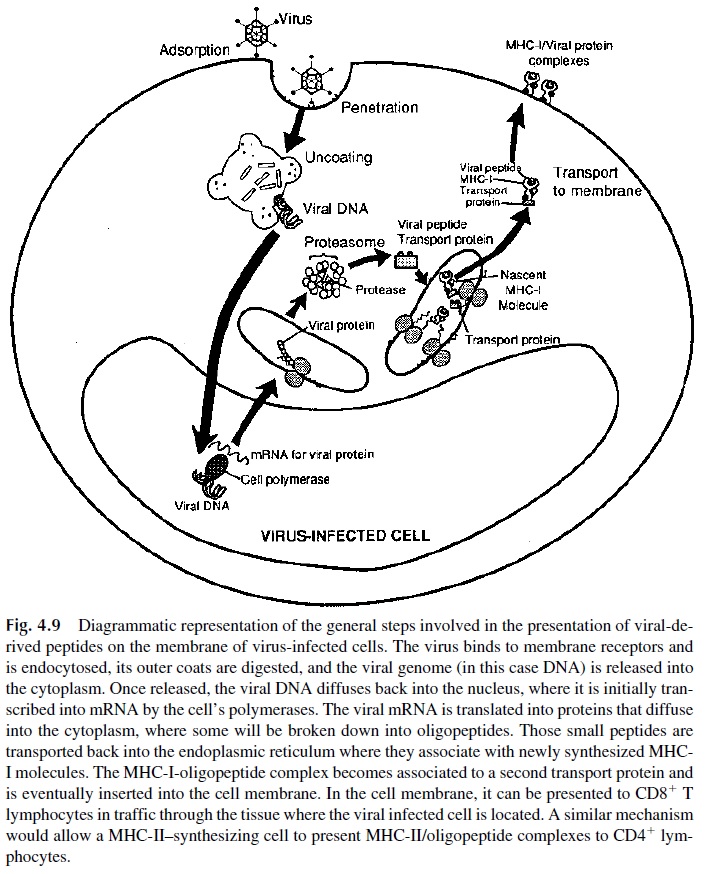 Similar to helper T cells, the stimulation of cytotoxic T cells also requires additional signals and interactions, some of which depend upon cell-cell contact, such as those medi-ated by the interaction of CD8 with MHC I, CD2 with CD58, LFA-1 with ICAM family members, and CD28 with CD80 and CD86. On the other hand, the expansion of antigen-activated cytotoxic T lymphocytes requires the secretion of IL-2. Rarely, activated cyto-toxic T lymphocytes can secrete sufficient quantities of IL-2 to support their proliferation and differentiation and thus proceed without help from other T-cell subpopulations. Most frequently, activated helper T lymphocytes provide the IL-2 necessary for cytotoxic T lym-phocyte differentiation. The activation of helper T cells requires the presentation of anti-gen-derived peptides in association with MHC-II molecules. The simultaneous expression of immunogenic peptides in association with MHC-I and MHC-II molecules is likely to happen in infected APCs.

Resting, circulating cytotoxic T lymphocytes carry antigen receptors able to recog-nize associations of MHC-I and nonself peptides; occupancy of the binding site on the TCR by MHC-I–associated peptide provides the antigen-specific signal that drives cytotoxic T cells. In the case of antiviral responses, virus-infected macrophages are also likely to ex-press viral peptide–MHC-II complexes on their membrane; these complexes are able to ac-tivate CD4+ helper T cells. Thus, an infected professional APC is likely to fulfill the con-ditions required to serve as the anchor for all the cells participating in the immune response against the infecting virus.

Cytotoxic T lymphocytes also differentiate and proliferate when exposed to cells from an individual of the same species but from a different genetic background, as a consequence of tissue or organ transplantation. In vitro, the degree of allostimulation between lymphocytes of two different individuals can be assessed by the mixed lymphocyte reac-tion . Two types of recognition have been analyzed:

Graft rejection is more intense with increasing MHC disparity between donor and host. This is likely a consequence of the greater structural differences between the non-shared MHC molecules. Thus, MHC differences are likely to perpetuate the rejection reac-tion in that self (host-derived) MHC molecules will present nonself peptides derived from the donor’s MHC molecules.

Alternative pathways of antigen presentation to cytotoxic T cells involving nonpoly-morphic molecules have been recently described. The best characterized of these pathways involves CD1, a family of nonpolymorphic, MHC-I–related molecules that includes five different isomorphic forms (A to E). Antigen-presenting cells, including dendritic cells and B cells, express CD1A, B, and C molecules and have been shown to present mycobac-terium-derived lipid and lipoglycan antigens to both γδ and αβ CD8+ cytotoxic T lym-phocytes. Both γδ and CD8+ αβ T cells stimulated by mycobacterial antigens presented in association with CD1 molecules cause the death of the presenting cells.