The activation of resting T helper cells requires a complex and coordinated sequence of signals delivered from the T-cell receptor on the cell membrane to the nucleus of the cell.

The activation of resting T helper cells requires a complex and coordinated sequence of signals delivered from the T-cell receptor on the cell membrane to the nucleus of the cell. Of all the signals involved, the only antigen-specific interaction is the one that involves the TcR and the peptide-MHC complex. The binding of the peptide-MHC complex to the TcR is of low affinity, and other receptor-ligand interactions are required to maintain T-lym-phocyte adhesion to APC and for the delivery of required secondary signals. 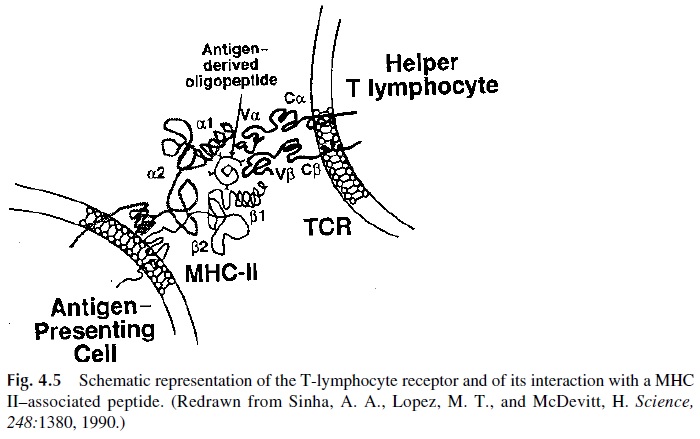 Several other cell adhesion molecules (CAM) can mediate lymphocyte-AC interac-tions, including lymphocyte function–associated antigen (LFA)-1 interacting with the in-tercellular adhesion molecules (ICAM)-1, -2, and -3, CD2 interacting with CD58 (LFA-3). Unlike the interactions involving the TcR, these interactions are not antigen specific. Their role is to promote stable adhesion and signaling between T lymphocytes and APC essential for proper stimulation through the TcR. Furthermore, T-cell activation requires sustained signaling achieved through the establishment of what is known as the immunological synapse, in which peptide–MHC-II complexes form clusters on the APC membrane allow-ing aggregation and clustering of multiple TcR molecules on the opposing T-cell membrane. In the regions of contact the two cells are separated by a narrow gap surrounded by other in-teracting molecules such as (CD2/CD58, LFA-1/ICAM-1, etc.). The result is a stable and close apposition between APC and T cell, essential for sustained signaling (Fig. 4.7). 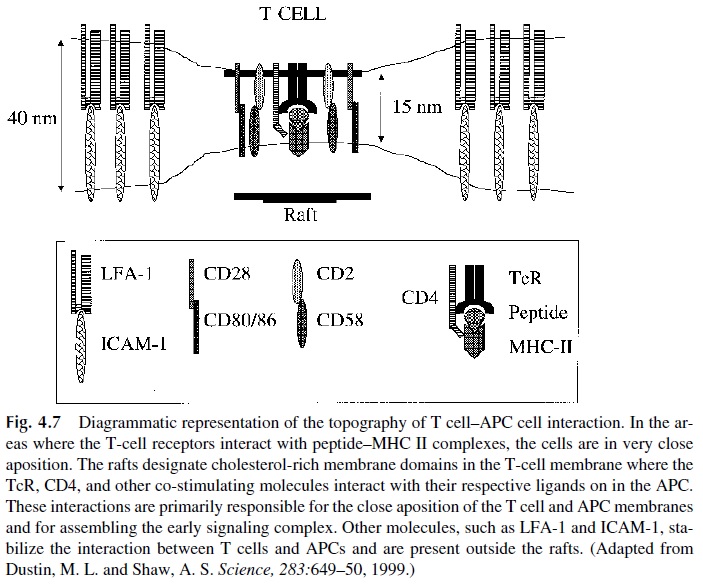 It is important to stress that accessory cells participate in the activation of helper T lymphocytes through the delivery of signals involving cell-cell contact as well as by the re lease of soluble factors or cytokines (Fig. 4.8):

2. Signals mediated by the cell-cell interactions, which are facilitated by the up-regulation of some of the interacting molecules after initial activation, includ-ing: 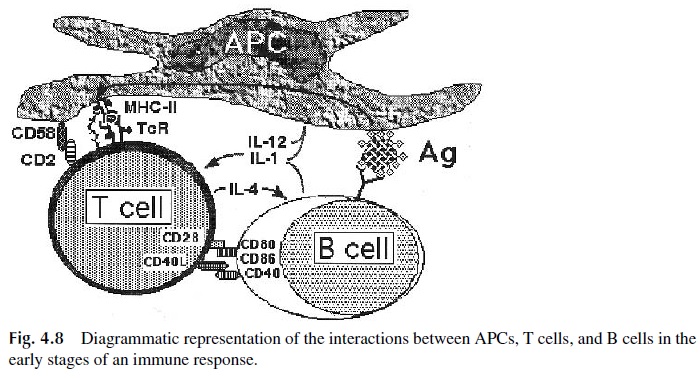 Interleukin-1 (IL-1), a cytokine that promotes growth and differentiation of many cell types, including T and B lymphocytes. Both membrane-bound and soluble IL-1 have been shown to be important in activating T lymphocytes in vitro. Mem-brane-bound IL-1 can only activate T lymphocytes in close contact with the APC.

However, all these co-stimulatory signals are not specific for any given antigen. The speci-ficity of the immune response is derived from the essential and first activation signal de-livered through the antigen-specific TcR.

The precise sequence of intracellular events resulting in T-cell proliferation and dif-ferentiation. The following is a summary of the major steps in the activation sequence:

1.Occupancy and cross-linking of the TcR signals the cell through a closely as-sociated complex of molecules, known as CD3, that has signal-transducing properties. The TcR heterodimer itself has no recognizable kinase activity. The associated CD3 complex, however, has 10 intracytoplasmic motifs (im-munoreceptor-tyrosine-based activation motifs, ITAMs) that play a key role in the sequence of cell activation. These ITAMs are associated with the γ, δ, ε, and ζ chains of the CD3 complex.

2.Co-stimulatory signals are delivered by CD4, as a consequence of the interac-tion with MHC-II, and by CD45, a tyrosine phosphatase, activated as a conse-quence of TcR occupancy.

a. Phospholipase C activation, leading to the mobilization of Ca2+ -depen-dent second messenger systems, such as inositol triphosphate (IP3), which promotes an increase in intracellular free Ca2+ released from intracellular organelles and taken up through the cell membrane. The increase in intra-cellular free calcium results in activation of a serine threonine phosphatase known as calcineurin. Diacylglycerol (DAG), another product released by phospholipase C, activates another serine/threonine kinase known as pro-tein kinase C (PKC). Multiple other enzymes and adapter molecules are activated in the ensuing cascading sequence.

b. The activation of second messenger systems results in the activation and translocation of transcription factors, such as the nuclear factor-kappa B (NF- B) and the nuclear factor of activated T cells (NF-AT). Once translo-cated to the nucleus, these factors induce genes controlling cytokine production and T-cell proliferation, such as those encoding interleukin-2 (IL-2), the IL-2 receptor, and c-myc.

c. Upregulation and modification of several membrane proteins on the T-cell membrane, such as CD28 and CD40 ligand (CD40L).These molecules in-teract, respectively, with CD80/86 and CD40 on the APC membrane. The interactions involving this second set of molecules deliver additional sig-nals that determine the continuing proliferation and differentiation of anti-gen-stimulated T cells.