Strict regulation of gene expression in a consistent manner when and where the transgene is needed is a requirement for successful clinical implementation of gene therapy.

Strict regulation of gene expression in a consistent manner when and where the transgene is needed is a requirement for successful clinical implementation of gene therapy. Several systems consisting of a chimeric promoter containing a specific tandem operator (Op) placed adjacent to a minimal promoter (Pmin) that drives expression of the therapeutic transgene are under development (Fig. 18). The chimeric promoter is activated by binding of a transactivator (TA) complex to the Op. The TA complex consists of a DNA binding domain (DB) and a ligand binding (LB) domain, capable of interacting with an orally active compound. The compound facilitates formation of the TA complex and dictates gene expression or repres-sion. Regulated gene expression systems currently under development are responsive to small-molecule drugs such as antibiotics, steroids, immunosuppres-sants and their derivatives (Goverdhana, 2005). In an optimized regulated gene expression system, each component must be non-immunogenic, safe and well tolerated. Transgene expression must be undetectable when repressed and highest when induced. The inducer is reversible and compact in size for efficientincorporation in gene delivery systems. The regulat-ing compound should be non-toxic, able to distribute to the target tissue and have a half-life of a few hours so that gene expression can be altered quickly. These issues are common to the development of traditional pharmaceutical compounds and are areas in which the pharmacist and the pharmaceutical scientist can make significant contributions. 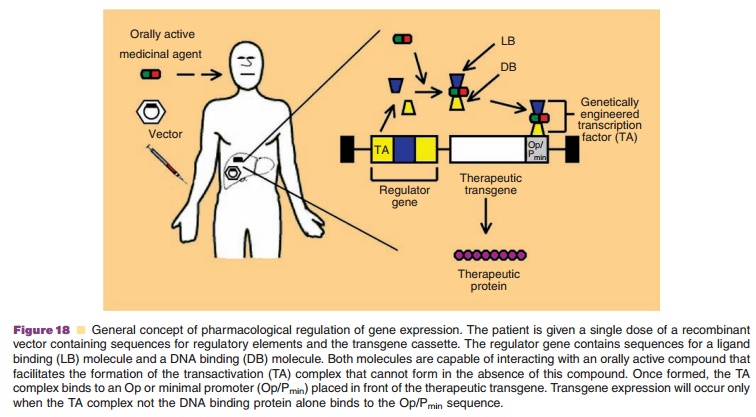 The most widely tested regulated gene expression systems are the TET-ON/TET-OFF and Rapamycin/ Rapalog dimerizer systems (Fig. 19) (Goverdhana, 2005; Vilaboa, 2006). They have been engineered primarily in recombinant adenovirus, AAV and retrovirus vectors (Goverdhana, 2005; Weber, 2006). Although all of the systems currently under investigation are in pre-clinical testing, they are on the brink of entering clinical trials. While these systems involve dosing and control of a single therapeutic transgene, development of elaborate semi-synthetic gene networks, capable of interacting seamlessly with cellular processes to produce self-sustained, feedback-controlled and physiologically triggered transgene expression is underway. This approach, if successful in the clinic, will most likely become the premiere technology of molecular medicine. 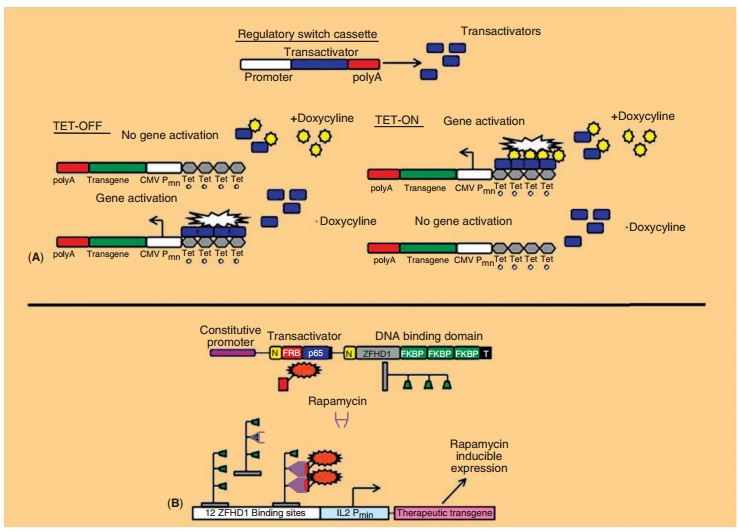 The majority of pharmacologically regulated gene expression systems have been tested in animal models of cancer and hormone-related diseases. One approach for the treatment of certain malignancies is the adoptive transfer of T-cells. A problem with this method, however, is that the cells may recognize both normal and malignant tissue and cause fatal graft-