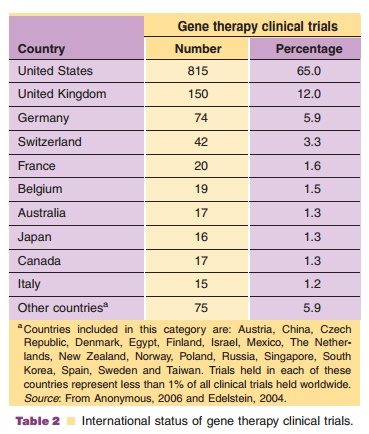 The objective of cancer gene therapy is to destroy tumor cells and preserve normal tissue. Strategies to achieve this goal include: (a) correction of genetic mutations contributing to the malignant phenotype, (b) stimulation of a T-cell-mediated immune response against the tumor (immunotherapy), (c) use of oncolytic viruses that replicate in and destroy tumor cells (virotherapy), and (d) use of enzyme pro-drug systems that destroy tumor cells by converting a non-toxic medicinal compound to cytotoxic metabo-lites. Enzyme pro-drug therapies are further dis-cussed in the Drug Metabolism and Gene Therapy section later in this chapter.

Understanding cancer at the molecular level is the platform for gene correction in cancer therapy. Although the complex process of tumor development and growth limits the utility of this strategy, approxi-mately 12% of cancer gene therapy clinical trials involve over-expression of tumor suppressor genes such as p53, MDA-7 and ARF (Majhen, 2006). The p53 tumor suppressor gene is one of the most studied candidates for cancer gene therapy (Bouchet, 2006) which led to the approval of a recombinant adenovirus expressing this transgene, Gencidine, by China’s State Food and Drug Administration (SFDA) making it the first gene therapy product available for worldwide clinical use (Fig. 2). Early attempts at gene transfer for cancer have been promising, but have also been pivotal in identifying the challenges of gene delivery. Efficient delivery of genes deep within tumors is difficult and restriction of gene expression to malignant tissue challenging. Gene silencing has also limited success of this approach especially when continuous expres-sion is required. Despite this, prostate, lung, and pancreatic tumors have been successfully treated in the clinic with a variety of genes and transfer methods. 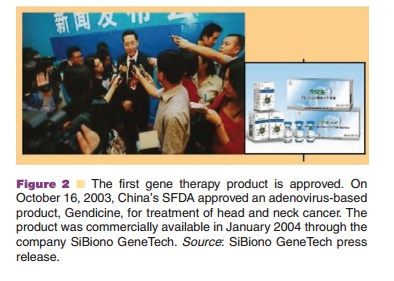 Strategies for inducing the immune system to target and destroy malignant cells has had limited success due to limited expression and low avidity of tumor-associated antigen-specific cytotoxic T-cells and the inherent ability of tumor cells to evade immune detection. Expression of either pro-inflammatory cyto-kines (interleukin (IL)-2, IL-4 and IL-12), co-stimula-tory molecules (HLA-B7, and lymphocyte function-associated antigen 3 (LFA-3)) or tumor-specific antigens such as mucin-1 and human carcino-embryonic antigen to stimulate anti-tumor immune responses has been tested clinically (Majhen, 2006). The vector expressing the transgene is often placed directly in the tumor to stimulate immune responses within lesions to induce long-lasting protective immunity (Fig. 3A). Tumor cells isolated from the patient or cancer cell lines can also be induced to express one or more immunostimulatory genes ex vivo (Fig. 3B). Culturing the patient’s T-cells or bone marrow in the presence of a tumor antigen or transducing them with a stimulatory gene, priming them to recognize and remove cancer cells after readministration, has also been tested (Fig. 3C). These strategies are showing great promise for the treatment of many cancers unresponsive to conventional therapy. 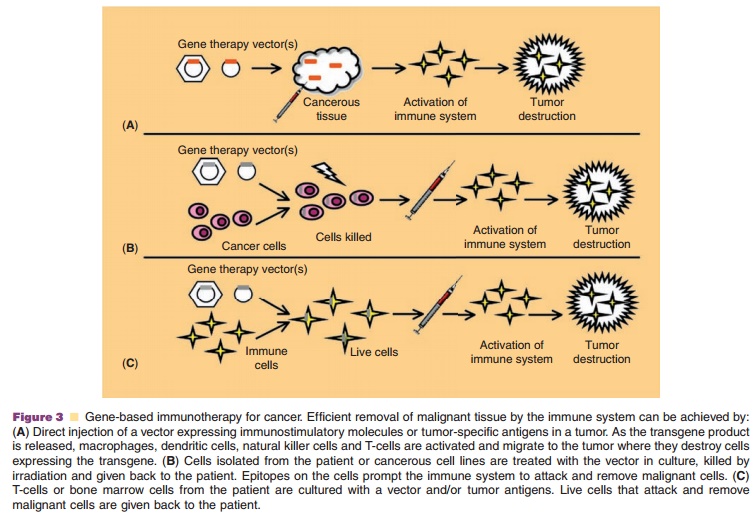 Oncolytic viruses induce cell death through replica-tion, expression of cytotoxic proteins and cell lysis in malignant cells while remaining innocuous in the rest of the body. Vaccinia, herpes simplex type I (HSV), reovirus, Newcastle disease virus, poliovirus and adenovirus are often selected for this application because they naturally target cancers and contain genomes that can be easily manipulated (Aghi, 2005). A problem with this tactic is that many people naturally have antibodies that clear the virus before it can successfully replicate. Significant safety precautions must also be taken, making clinical trials with these viruses extremely expensive and cumber-some.

Despite this, oncolytic virotherapy has had some clinical success (Markert, 2000; Varghese, 2002; Argnani, 2005). Gene therapy for cancer is a rapidly progressing field and will undoubtedly be implemen-ted into more chemotherapeutic protocols in the future. Many trials have shown that a gene-based approach can improve currently available treatment options and that more than one therapeutic modality may be necessary for clinical success.

The current understanding of molecular mechanisms of cardiovascular disease has uncovered a large number of genes that could serve as potential targets for molecular therapies. Over-expression of genes involved in vasodilation such as endothelial nitric oxide synthase (eNOS) and heme oxygenase-1 (HO-1) or inhibition of molecules involved in vasoconstriction (angiotensinpressure in animal models of hypertension (Melo, 2006). This approach has not yet been clinically tested due to the availability of highly effective, conventional medications with

similar pharmacology. However, long-term control of blood pressure by gene transfer could overcome problems with non-compliance with traditional med-ications in hypertensive patients.

Most clinical trials for cardiovascular disease are designed for the treatment of coronary and peripheral ischemia. Over-expression of pro-angiogenic factors such as vascular endothelial growth factor (VEGF), fibroblast growth factor (FGF), and hepatocyte growth factor (HGF) have been effective in myocardial and peripheral ischemia (Springer, 2006). Over-expression of endothelial and inducible NOS has been shown to reduce the failure rate of coronary artery bypass grafting procedures due to restenosis and atherosclero-sis. Over-expression of genes that can reduce cholester-ol such as apoproteins ApoA-1 and ApoE and the low density lipoprotein (LDL) and very low density lipoprotein (VLDL) receptors have been used for the treatment of inherited disorders of lipid metabolism such as familial homozygotic hypercholesterolemia (FHH) and ApoE deficiency (Grossman, 1995; Vahakangas, 2005). Although each of these approaches have been shown to be well tolerated in the clinic (Losordo, 1998; Mann, 1999; Fortuin, 2003; Springer, 2006), none have demonstrated unequivocal

therapeutic efficacy (Alexander, 2005; Conte, 2006). Larger, highly controlled, multi-center trials are needed to minimize the potential for placebo effects suspected to occur in some trials. Stringent criteria for patient selection is needed as many with cardiovascular disease often have underlying conditions that may cloud results. Endpoints for assessing efficacy and measures to assess potential short- and long-term complications must also be standardized. The efficacy of gene therapy for cardiovascular disease will most likely be enhanced by strategies that incorporate multiple gene targets with cell-based approaches

Of the 25,000 genes that comprise the human genome, mutations in over 1,800 have been identified as the cause of a variety of hereditary disorders. The ultimate therapeutic goal of gene therapy for mono-genetic disorders is to permanently replace a gene with its functioning counterpart in stem cells to restore normal function and permanently reverse disease processes. To date, clinical trails have not met this objective. They have shown, however, that gene transfer is feasible and phenotypic correction possible. Of the 102 active clinical gene therapy trials for monogenetic diseases, approximately 33% focus on CF, the most common inherited genetic disease in Europe and the United States (Wiley, 2006). To date, the severe combined immunodeficiency syndromes, comprising 20% of trials for inherited disorders, is the only group of diseases in which gene therapy has shown lasting, clinically meaningful therapeutic benefit. Other monogenetic diseases currently in clinical trials are listed in Table 3. 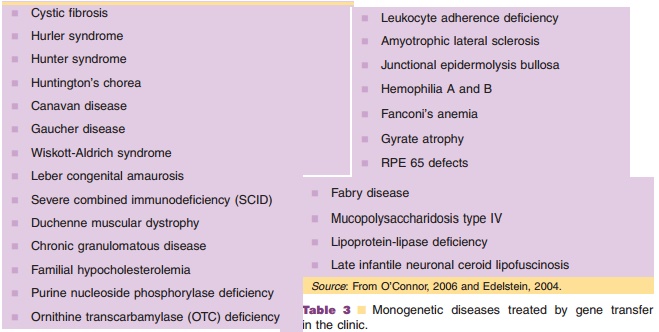 Issues which have prevented successful gene transfer for monogenetic diseases to date include: (a) lack of suitable gene delivery technologies, (b) un-favorable interactions between the host and gene transfer vector, (c) complex biology and pathology of monogenetic diseases and target organs, and (d) lack of relevant measures to assess the clinical efficacy of gene transfer. The greatest challenges that remain in the treatment of monogenetic disease are inducing gene expression sufficient to correct the clinical phenotype without precipitation of host immune responses and minimizing the risk of insertional mutagenesis for integrating vectors in dividing cellular targets. Improvements in vector technology and advancements in the understanding of cellular processes will vastly improve methods for correction of genetic disease.