One of the primary goals of cancer therapy is to deliver highly potent, cytotoxic compounds to tumors and mestastases and limiting the exposure of normal tissue to these agents.

One of the primary goals of cancer therapy is to deliver highly potent, cytotoxic compounds to tumors and mestastases and limiting the exposure of normal tissue to these agents. GDEPT is one approach toward this goal where a gene encoding a compound-specific enzyme is delivered directly to tumor cells. The corresponding prodrug is given and is only converted to a cytotoxic agent by the recombinant enzyme in the tumor. Localization of the effects of chemotherapy and the protection of normal cells from cytotoxic effects is further enhanced by the inclusion of tumor-specific promoters that bind transcription factors like hypoxia-inducible factor (HIF)-1 within the tumor microenvironment (Riddick, 2005). Some GDEPT strategies rely on a “bystander effect,” where cytotoxic agents produced by transfected cells spread to the GDEPT approach. Three have achieved phase III status (Wiley, 2006). 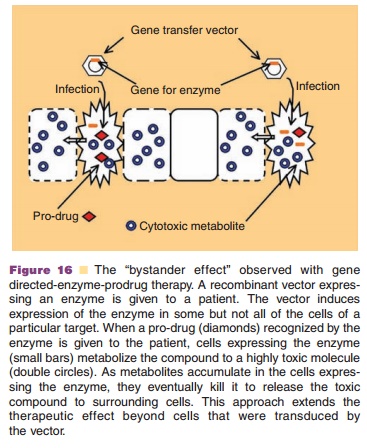 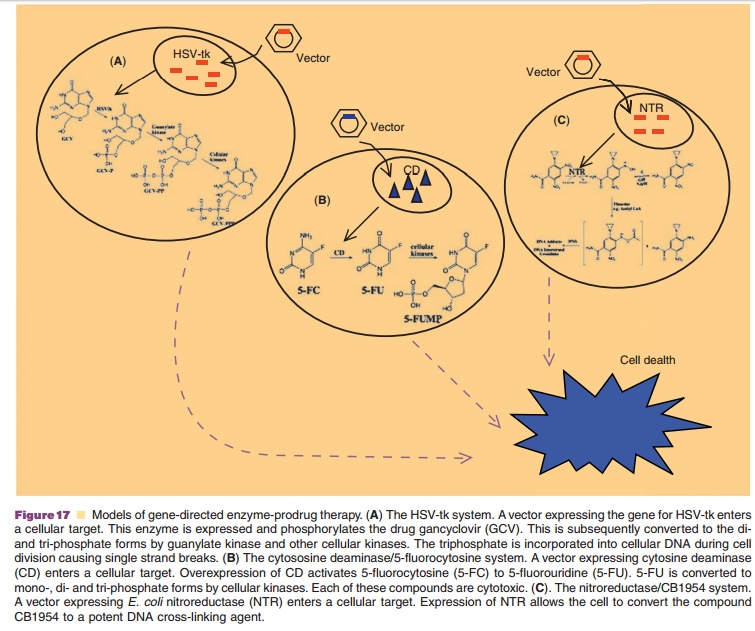 Over-expression of the herpes simplex virus thymidine kinase (HSV-tk) gene with gancyclovir represents the clinical standard of GDEPT. This system is selective because gancyclovir, a poor substrate for human monophosphatase kinase, is rapidly converted to the triphosphate form after phosphorylation in a cell expressing HSV-tk (Fig. 17A). The triphosphate competes deoxyguano-sine triphosphate during DNA elongation and, once incorporated in a strand, blocks DNA polymerase and induces single strand breaks. To date, the HSV-tk/ gancyclovir combination is the only GDEPT approach to reach phase III clinical testing.

Clinical use of 5-Fluorouracil (5-FU) is limited by side effects associated with high doses needed for therapeutic efficacy. Over-expression of bacterialcytosine deaminase and use of the prodrug 5-fluorocytosine (5-FC) has shown promise in treating cancer and minimizing effects in normal cells and tissues. Bacterial cytosine deaminase coverts 5-FC to 5-FU that is then converted to 5-fluorouridine-5-triphosphate (5-FUTP). 5-FUTP prevents nuclear processing of ribosomal and mRNA once it is incorporated into a DNA strand (Fig. 17B). Two phase I trials have demonstrated the safety of the cytosine deaminase/5-FC system in colon carcinoma (Crystal, 1997) and prostate cancer (Freytag, 2002).

The compound 5-aziridinyl-2,4-dinitrobenzamide (CB1954) can be converted to the potent DNA cross-linking mustard metabolite, 5-aziridynyl-4-hydroxyla-mino-2-nitrobenzaminde by the nitroreductase of E. coli (Fig. 17C). The NTR/CB1954 combination iscurrently being tested in the clinic in the United Kingdom (Wiley, 2006), however, poor-bioavailability of CB1954 limits the efficacy of this combination (Palmer, 2004). The design of highly potent prodrugs for nitroreductase with improved bioavailability is necessary for further work with this system.