Naked DNA is susceptible to nuclease degradation in the systemic circulation and is taken up in an inefficient, non-specific manner in many tissues.

Naked DNA is susceptible to nuclease degradation in the systemic circulation and is taken up in an inefficient, non-specific manner in many tissues. Physical methods used for gene transfer involve disruption of cell membranes. Chemical methods facilitate interaction with tissue targets and transport across cell membranes.

The earliest techniques to deliver recombinant DNA to cellular targets: microinjection, particle bombard-ment and electroporation, were rudimentary and severe (Table 6). Microinjection, direct injection of DNA or RNA into the cytoplasm or nucleus of a single cell is the simplest and most effective method for physical delivery of genetic material to cells. This transduces 100% of the recipient cells and minimizes waste of plasmid DNA, but requires highly specia-lized equipment and skills. It is harsh to the cell since it involves mechanical puncture of plasma and nuclear membranes and is generally restricted to ex vivo gene transfer of cultured cells or embryonic stem cells for production of transgenic animals. 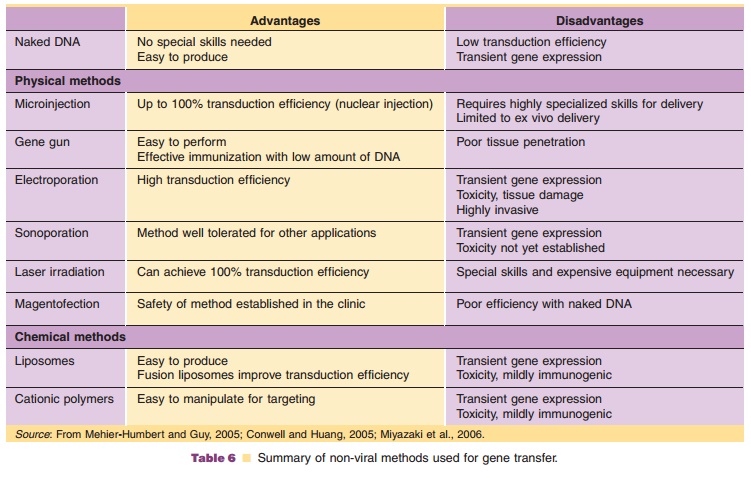 Particle Bombardment. Particle bombardment, using a“gene gun,” was first used to transfect plant cells and was later adapted for gene transfer in mammalian cells and tissues. Gold particles are coated with recombinant DNA and propelled by an electric spark or helium discharge into the target cell or tissue. Two principal devices available for gene transfer are the Accell (Agracetus, Inc.) and the Helios (BioRad Laboratories) gene guns. Transduction efficiency and distribution of gene expression relies upon particle size, timing of delivery and particle acceleration. This technology has been primarily used for genetic immunization. The benefit of particle bombardment is high levels of transgene expression with very low doses of DNA. DNA-loading capacity of the particles and the limited depth of penetration have limited the utility of this method. Although gene transfer by particle bombardment has been shown to be safe and well tolerated in the clinic, cells that directly encoun-ter DNA-coated particles can be severely damaged.

Electroporation. Electroporation, exposes the cellmembrane to high-intensity pulses of electricity that transiently destabilize the cell membrane and make it highly permeable to plasmid DNA. Successful delivery with this method has been reported in muscle, skin, liver and solid tumors. Commercially available electro-poration devices consist of a pulse generator and an applicator with several specialized electrodes tailored for delivery to specific tissues and organs. Several physical (pulse duration, electric field strength) and biological (DNA concentration and confirmation and cell size) factors can influence the efficiency of gene transfer and must be optimized based upon the cell type and size of the DNA molecule (Cemazar, 2006). Toxicity of this procedure is cell-specific, and muscle contraction and pain have been reported. The most significant issue limiting the clinical utility of electro-poration is unevenly distributed transgene expression in tissue. Several studies have suggested that electro-poration can elicit an immune response (Lefesvre, 2002; Babiuk, 2004; Cemazar, 2006).

Sonoporation. Within the last 10 years, newer, lessinvasive methods for gene transfer have been devel-oped. Sonoporation enhances cell membrane perme-ability by acoustic cavitation through ultrasound. Ultrasound waves collapse active bubbles, releasing energy that disrupts adjacent cell membranes. This technique was first tested for gene transfer in vitro with an ultrasound contrast agent, Albumex, composed of elastic and compressible gas-filled1997). Recently, in vivo gene transfer has been reported with this technique (Miller 1999; Huber, 2000). Efficiency of gene transferdepends upon transducer frequency, acoustic pressure, pulse duration, and length of exposure. The bubble shell composition and the type of entrapped gas in the contrast agent can also affect gene transfer. A commer-cial device is available for in vitro and in vivo use (Sonitron, Protech International). Both diagnostic and therapeutic ultrasound have excellent safety profiles in the clinic (Mehier-Humbert, 2005).

Laser Irradiation. Laser irradiation, involves focusinga laser beam on a target cell and modifying perme-ability by thermal effects. Although the mechanism of gene transfer by this method is not completely understood, transduction efficiency relies upon differ-ences in osmotic pressure between the cytoplasm and the surrounding medium. Laser irradiation induces minimal cell damage because permeabilization is transient and very fast. Although this technique can achieve 100% transduction efficiency without affect-ing cell growth and division, it is not widely used due to the expense and size of the laser source and specialized skills needed for successful application.

to DNA, a transfection reagent or viral vector by salt-induced colloidal aggregation (Plank, 2003). Magnetic particles are concentrated in target cells by an external magnetic field that pulls the particles across plasma membranes into the cytoplasm. High transduction efficiencies have been achieved with this method in vivo in the gastrointestinal tract and blood vessels (Scherer, 2003). Vector type (viral vs. non-viral), dose, composition and incubation time influence transduc-tion. The apparatus needed for this technique is simple and inexpensive. This method is safe and has been used clinically for delivery of chemotherapeutic agents (Bertram, 2006). Toxicity has been attributed to specific transfection reagents and not the technique itself. The main advantage of magnetofection is that it increases bioavailability of recombinant DNA and reduces the amount needed for effective gene transfer.

Hydroporation. Hydroporation or hydrodynamicgene delivery, involves injection of large volumes of solution into the circulation to overcome the physical barriers of the endothelium and the cell membrane. Utility of hydrodynamic gene delivery was first established when Liu et al. and Zhang et al. reported significant gene transfer in the liver of mice after rapid injection of large volume DNA solutions representing 8% to 10% of the total body weight (Liu, 1999; Zhang, 1999). Hydrodynamic delivery of genes to the muscle and kidney has also been described (Al-Dosari, 2005). This technique requires only a needle and syringe. Saline is often used for hydrodynamic procedures, however, Ringers solution and phosphate buffered saline have also been employed. The dose of DNA delivered by hydrodynamic delivery ranges from 0.1 to 10 mg/kg. Although marked transgene expres-sion has been achieved without tissue damage, an increase blood pressure and decrease heart rate due to the volume introduced into the system has been noted (Zhang, 2004). Transient increases in tissue-specific parameters such as serum transaminases after admin-istration to the liver and creatinine kinase after muscle delivery have also been reported. Hydroporation has been limited to small animals for functional and mechanistic studies. Lack of appropriate catheters for administration to larger animals is a limitation that must be overcome for further assessment of this technique in humans.

Cationic Liposomes. Liposomal gene delivery was thefirst non-viral system to reach clinical trials due to the pioneering work of Felgner and colleagues that described the natural interaction of cationic liposomes with the negatively charged phosphate backbone of recombinant DNA to form organized structures that protect the genetic material from degradation (Felgner, 1987). The positive charge along the surface also promoted interaction with the cell membrane and endocytosis.

Interaction of liposomes with DNA is dependent upon pH, charge, and lipid structure. A cationic lipid generally consists of four different functional domains: (a) a positively charged head group, (b) a spacer of varying length, (c) a linker bond, and (d) a hydrophobic anchor (Fig. 14). Efforts to improve transduction efficiency of cationic lipoplexes involve the use of neutral “helper” lipids, such as dioleoyl-phosphatidylethanolamine and cholesterol, to stabi-lize the complex and promote disruption of cell membranes (Karmali, 2006). Addition of other com-ponents to enhance DNA-lipid interactions, mem-brane-permeabilizing agents to facilitate cellular uptake and natural targeting ligands such as trans-ferrin, folate, asialofetuin, or antibodies against cell surface molecules have further improved tissue selectivity and transduction efficiency (Collins, 2006). 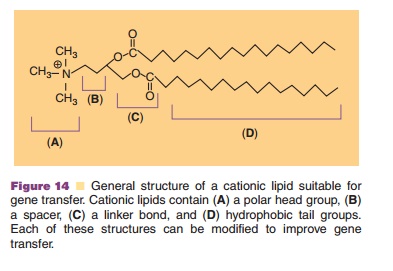 Fusion Liposomes. Virosomes, or fusion liposomeshave been designed to improve vector stability in the endosome and the cytoplasm and facilitate delivery to the nucleus. The first of these viral/non-viral hybrids, the Hemagglutinating Virus of Japan (HVJ) liposome, was prepared from UV-inactivated HVJ particles and liposomes containing DNA com-plexed with the High Mobility Group-1 (HMG-1) protein (Fig. 15) (Kaneda, 1999). Successful gene transfer is largely due to the hemagglutinin-neurami-dase (HN) and fusion glycoproteins (FGP) in the lipid bilayer that facilitate interaction with sialic residues on the cell surface and fuse with the cell membrane, bypassing endocytosis. The HMG-1 protein also promotes gene stabilization within the nucleus. Although, anti-HVJ antibodies have been reported in 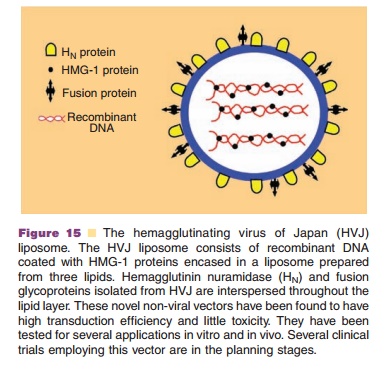