The classic example of plant growth stimulation by plant/microbe symbiosis is nitrogen fixation by Rhizobium bacteria within plant root tissue.

The classic example of plant growth stimulation by plant/microbe symbiosis is nitrogen fixation by Rhizobium bacteria within plant root tissue. A full expo-sition of nitrogen fixation may be found in many classical textbooks and sowill be described here only in outline. The process of root nodule formation is shown diagrammatically in Figure 10.5. In total, there is a limited number of organisms able to fix nitrogen, all of which are prokaryotes. All living organisms are dependent ultimately on such organisms, due to a universal and essential requirement for nitrogen, normally in the form of nitrate, ammonia or ammo-nium ion or as amino acids from which the amino group may be transferred as required. Nitrogen is fixed by reduction to ammonia either by free living organ-isms or by plant symbiots. In both cases, it is essential to have an oxygen free environment as the enzymes involved in the process are irreversibly inactivated by the presence of oxygen. Of the free living organisms able to fix nitrogen, some achieve this naturally while others have to create such an environment. Clostridium and Klebsiella achieve this since they are both anaerobes and so are already adapted to life in an oxygen-free atmosphere, while Cyanobacteria and Azobacter have developed means of creating one for themselves. Azobac-ter does this by having a very high oxygen consumption rate thus effectively creating an oxygen-free environment. Other nitrogen-fixing bacteria include the filamentous bacteria such as the Corynebacterium species, and photosynthetic bacteria referred to elsewhere, such as Rhodospirillum. The latter makes use of photosynthesis to provide the energy for these reactions and so is presented with the problem of removing the oxygen produced during photosynthesis away from nitrogen fixation reactions. Although these free living organisms have a vital role to play in their particular niches, approximately 10 times more nitrogen is fixed by plant symbiots. Presumably this is because the plant is better able to provide the necessary levels of ATP to meet the high energy demands of the process than are free living bacteria. In addition, the plant supplies the endophytes with dicarboxylic acids, such as malate and succinate and other nutrients, like iron, sulphur and molybdenum which is a component of the nitrogen-fixing enzymes. It also provides its nitrogen-fixing symbiots with an oxygen-free environment, as described later in this discussion. The analogous chemical process has an enormous energy requirement to achieve the necessary high temperature, in the region of 500 ◦ C, and a pressure in excess of 200 atmospheres. This is part of the reason why manufacture of fertilisers for agricultural purposes, which is in effect the industrial equivalent of the biological process, is a drain on natural resources. Together with the unwelcome leaching of surplus fertiliser into water-ways, causing algal blooms among other disturbances, this makes the widespread application of fertiliser recognised as a potential source of environmental dam-age. It is understandable to see a drive towards the engineering of plants both to increase the efficiency of nitrogen fixation, which is estimated at being 80% efficient, and to extend the range of varieties, and especially crop species, which have this capability. It is also worth noting that unlike superficially applied fer-tilisers which may exceed locally the nitrogen requirement and so leach into the surrounding waterways, nitrogen fixation by bacteria occurs only in response to local need and so is very unlikely to be a source of pollution.

The following brief description of the required interactions between plants and microbes, the example used here being Rhizobium, should serve to illustrate why such a goal is very difficult to achieve. Firstly, the plant is invaded by a member of the Rhizobium family of free living soil bacteria. There is a specific relationship between plant and bacterium such that only plants susceptible to that particular member of the group may be infected. Genes involved in the infection process and nodule formation called nod genes are coded for by the bacterium. The nod genes are activated by a mixture of flavenoids released by the plant into the region around the roots and thus the plant signals to the bacterium its receptiveness to be infected.

After infection through the root hairs, the multiplying bacteria find their way into the cells of the inner root cortex. They are drawn into the cell by endo-cytosis shown in Figure 10.5 and so are present within the cell bounded by 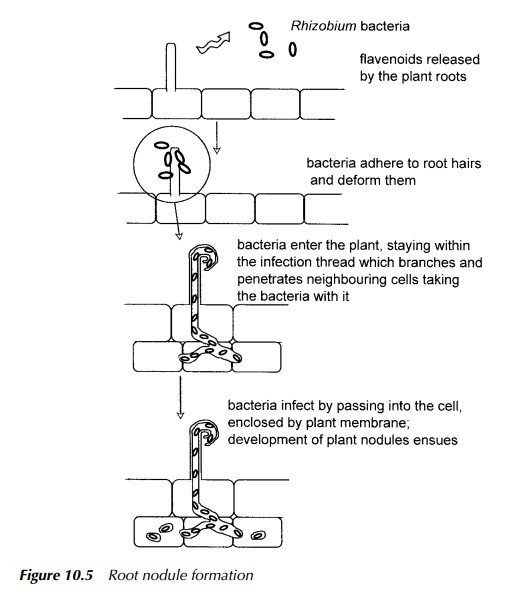 plant cell membrane. This structure then develops into nodules containing the nitrogen-fixing bacteria. Several changes to the plant then ensue including the synthesis of proteins associated with the nodule, the most abundant of which is leghaemoglobin, which may reach levels of up to 30% of the total nodule protein. The genes coding for this protein are partly bacterial and partly plant in origin and so exemplify the close symbiosis between the two organisms. The expres-sion of leghaemoglobin is essential for nitrogen fixation, since it is responsible for the control of oxygen levels. The enzymes for fixation are coded for by a plasmid of Rhizobium and are referred to as the nif gene cluster. There are two components each comprising a number of genes. One component is nitrogenasereductase the function of which is to assimilate the reducing power used by thesecond component, nitrogenase, to reduce nitrogen to ammonium ion. Expression of the nif genes is highly regulated in all organisms studied to date. In addition to the nif and the nod genes, Rhizobium also carries additional genes which are involved in the fixation of nitrogen called the fix genes. Once ammonia, or the ammonium ion, has been formed it may be transferred to the amino acid, glutamate, to produce glutamine. This transfer is frequently invoked throughout metabolism. This is not the only route for the assimilation of the amino group into metabolic pathways; the synthesis of the purine derivative, allantoin or allantoic acid, being a less heavily used alternative. These pathways are described in Chap-ter 2. Nitrogen fixation involving Rhizobium has been the focus of the preceding discussion, but the family of aerobic, Gram positive bacteria, Actinomycetes, is another group carrying out the same function using a similar mechanism. These may form a network of aerial or substrate hyphae resembling a structure com-monly associated with that of fungi. These bacteria may form a close association, called actinorhizae, with the roots of a number of plants which tend to be woody, or shrub-like in nature.