Biogas is a methane-rich gas resulting from the activities of anaerobic bacteria, responsible for the breakdown of complex organic molecules.

Biogas is a methane-rich gas resulting from the activities of anaerobic bacteria, responsible for the breakdown of complex organic molecules. It is combustible, with an energy value typically in the range of 21 – 28 MJ/m3 . The general pro-cesses of anaerobic digestion and the biochemistry of methanogenesis have been discussed in earlier sections of this book, so they will not be restated here. As mentioned previously, the main route for methane production involves acetic acid/acetate and accounts for around 75% of gas produced. The remainder is made up via methanol or carbon dioxide and hydrogen, as shown in Figure 10.2. 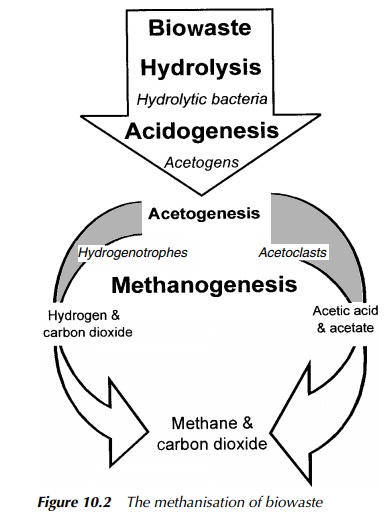 At various times a number of models have been put forward to aid the pre-diction of biogas production, ranging from the simplistic to the sophisticated.

Many of these have been based more on landfill gas (LFG) generation than truly representative anaerobic bioreactors, which does lead to some confusion at times. However, it is generally accepted that the linked, interdependent curves for cel-lulose decomposition and gas evolution can be broadly characterised as having five principal stages, outlined below.

•Stage III – Carbon dioxide decreases and plateaus, to hold at around 40%; methane production commences and achieves steady state at around 60%; free fatty acids decrease to minimum levels; cellulose breakdown continues at a linear rate with respect to time; nitrogen levels fall to near zero.

Although beyond the scope of the present discussion to address fully, the posi-tion of hydrogen as a regulator of methane production warrants a brief mention. In the earlier examination of anaerobic digestion the obligate syntrophic relationship between the hydrogen-producing acetogenic bacteria and the hydrogen-utilising methanogens, was described. Essentially, higher fatty acids and alcohols are converted to acetate, which requires an active population of hydrogenotrophic methanogens to ensure a low hydrogen partial pressure, avoiding the preferential production of butyric, lactic, proprionic and other acids instead of the desired acetic. This has the potential to cause higher volatile fatty acids to accumulate beyond the system’s ability to self-buffer, leading to a lowering of the pH. In turn, as the increased acidity inhibits the methanogens themselves, methane production ceases and ultimately the process will collapse.

A number of different applications have developed the idea of anaerobic digestion for methane production, notably in the waste management, sewage treatment, agricultural and food processing industries. The process has also been successfully used at relatively small scale, commonly with animal manures as its feedstock. Figure 10.3 shows an illustrative chart of methane generation for many of the common biodegradable components of MSW. 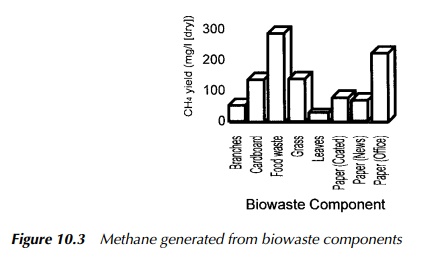 Methane has an explosive range of 5 – 15% by volume and a density at 20 ◦C of 0.72 kg/m3; for hydrogen the same properties lie between 4 – 74% and 0.09 kg/m3 at 20 ◦ C, respectively. At 20 ◦ C, carbon dioxide has a density of 1.97 kg/m3 . The calorific value of typical biogas, consisting of about 60% CH4, 40% CO2, lies between 5.5 – 6.5 kWh/m3 and it is this which makes its production attractive as a means of generating renewable energy. As was mentioned in the earlier section on anaerobic digestion, with a theoretical yield of 400 m3 of biogas per wet cellulosic tonne, the prospect of high energy returns simultaneous with waste treatment has clear appeal.

However, as was also pointed out in the same earlier segment, it is not feasible to optimise conditions such that high levels of both waste reduction and gas generation are deliverable. More commonly, in practice only around a quarter of the potential biogas yield is actually achieved.

Although biogas from engineered AD processes share many similarities with landfill gas (LFG), it is important to remember that it is of quite distinct quality, being much cleaner and far less contaminated by traces of other gases. LFG may contain a bewildering array of ‘others’, dependent on the exact nature of the waste undergoing decomposition. The list includes the likes of 1,2-dichloroethene, alkylbenzene, butylcyclohexane, carbon disulphide, propylcyclohexan, methane-thiol, decane, dichlorobenzene, undecane, ethylbenzene, dodecane, trimethylben-zene, tridecane, toluene, dimethyl disulphide, nonane and sulphur dioxide. Biogas, by contrast, is relatively pure by comparison, since the bulk of the inorganic matter and many potential pollutants are excluded from the bioreactor, either by source or mechanical separation, as part of the waste preparation process. This obviates the need for high temperature flaring, commonly used for LFG to destroy residual pollutant gases, since they are highly hostile to the fabric of any generation equipment intended to be used.

The main cause for concern in this respect is hydrogen sulphide (H2S), which is a metabolic byproduct of sulphur-reducing bacteria. Unsurprisingly, the amount present in the final gas produced depends largely on the relative abundance of sulphur-containing compounds in the original biowaste. H2S is acidic and this poses a major corrosion risk to gas handling and electrical generation equipment. Scrubbing hydrogen sulphide out of biogas is possible, but in practice it is more common to use a high-alkalinity lubricant oil which is changed often.

Biogas utilisation involves burning it, with some of the energy being trans-formed to electrical. There are three basic types of engine which are suitable generating motors for biogas uses, namely turbine, dual fuel and spark ignition. For each there are numbers of different manufacturers worldwide. While, clearly, it lies far outside of the scope of this book to discuss them, it is worth noting that for any given application, the type of engine used will normally be decided by a number of contextual issues. Hence, the quantity of the biogas produced, its purity, the intended life of the plant, relevant pollution controls and other similar site-specific considerations will need to be considered.

Generation processes are generally relatively inefficient thermodynamically, and often much of the available energy is effectively lost as heat. However, the nature of engineered AD processes are such that there is a ready built-in demand for thermal energy to elevate and maintain the digester temperature. This may account for between 20 – 50% of the total energy produced, dependent on system specifics, in a typical temperate facility, with the remainder being available for other uses. A representative energy flow for gas-engine generators is shown in Figure 10.4. 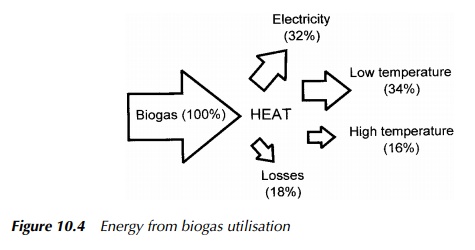