The concept of obtaining energy from biomass material was mentioned earlier, in respect of the biological waste treatment methods involving anaerobic digestion and fermentation, and represents nothing particularly novel in itself.

The concept of obtaining energy from biomass material was mentioned earlier, in respect of the biological waste treatment methods involving anaerobic digestion and fermentation, and represents nothing particularly novel in itself. Methane and ethanol have been long established as fuels in many parts of the world, their production and utilisation being well documented. Both of these may be described as derived fuels, biochemically obtained from the original biomass. However, to many people around the globe, the most familiar forms of biofuel are far more directly utilised, commonly via direct combustion and, increasingly, pyrolysis. Around half the world’s population relies on wood or some other form of biomass to meet daily domestic needs, chiefly cooking. Estimates put the average daily consumption of such fuels at between 0.5 – 1.0 kg per person (Twidell and Weir 1994a). This equates to around 150 W which is an apparently high figure, but one largely explained by the typical 5% thermal efficiency of the open-fire method most commonly encountered.

The energy demands of the developed world are well known to be enormous. In the USA alone, the requirement for electricity has grown by 2.7% on average per year over the past 10 years (Perkowitz 2000). The Executive Order on BiobasedProducts and Bioenergy, August 1999, set out the goal of tripling US biomassuse by 2010, which has been estimated to be worth around $15 billion of new income, while at the same time reducing carbon emissions by the equivalent of removing some 70 million cars from the road (Feinbaum 1999). The European Commission has also suggested that the EU as a whole should aim to double the current contribution made by renewable energy sources, taking it to 12%, also by 2010. Under this proposal, biomass energy was to provide an additional 90 million tonnes of oil equivalent (Mtoe) per year, raising its overall share to 137 Mtoe. Half of this would come from specifically farmed energy crops, while other biofuel forms would account for the rest..

The energy of all biofuels derives ultimately from the sun, when incident solar radiation is captured during photosynthesis. This process collects around 2 × 1021 joules of energy, or 7 × 1013 watts, each year, throughout the biosphere as a whole. During biomass combustion, as well as in various metabolic processes described elsewhere, organic carbon reacts with oxygen, releasing the energy once more, principally as heat. The residual matter itself feeds back into natural cycles for reuse. It has been calculated that a yearly total of some 2.5 × 1011 tonnes of dry matter circulates around the biosphere, in one form or another, of which around 1 × 1011 tonnes are carbon. (Twidell and Weir 1994b). 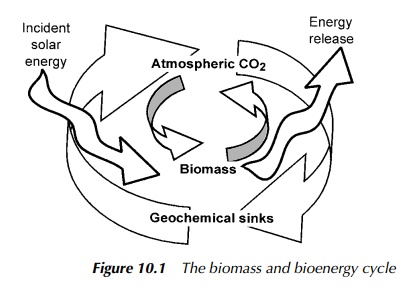 This relationship of energy and matter within the biospheric system, shown schematically in Figure 10.1, is of fundamental importance to understanding the whole question of biomass and biofuels. Before moving on to examine how inte-grated technologies themselves combine, it is worth remembering that the crux of this particular debate ultimately centres on issues of greenhouse gases and global warming. Increasingly the view of biomass as little more than a useful long-term carbon sink has been superseded by an understanding of the tremendous potential resource it represents as a renewable energy. Able to substitute for fossil fuels, bioenergy simply releases the carbon it took up during its own growth. Thus, only ‘modern’ carbon is returned, avoiding any unwanted additional atmospheric contributions of ancient carbon dioxide.