Intensively reared crops can suffer extensive and expensive losses resulting from plant disease infection. Until the early 1930s, crop rotation and the use of animal manures and green mulches provided the traditional protection regime; after this time, chemical fumigation became the favoured method to deal with soil-borne pathogens, which can accumulate heavily in intensive monocultures. Methyl bro-mide has been the main agent used, its popularity largely attributable to its ability also to destroy weeds and resident insect pests. It is, however, an indiscriminate tool, and though it has contributed directly to the commercial viability of many growers’ operations, it has been implicated in ozone depletion. Accordingly, under the terms of the Montreal Protocol, it is due to be phased out by 2005. This, coupled with other fears regarding residual bromine in food and ground-water, has led to bans in Germany, Switzerland and the Netherlands, the latter being, at one time, Europe’s largest user of methyl bromide soil fumigation.

A number of alternative options are being explored, including soil pasteurisa-tion using steam, ultraviolet treatment and the development of resistant cultivars using both selective breeding and genetic modification. The use of compost extracts – so-called ‘compost teas’ – is also receiving serious consideration as a means of crop-specific disease control. Their action appears to be two-fold, firstly as a protection against foliar diseases and secondly as a inoculant to restoring or enhancing suboptimal soil microbial communities.

Research projects in Germany, Israel, Japan, the UK, the USA and elsewhere have found that these extracts are very effective natural methods to suppress or control a number of plant diseases thus reducing the demand for artificial agro-chemical intervention (Table 10.1). Direct competition with the relevant pathogen itself is one of a variety of mechanisms believed to play a part in the overall disease suppression, along with induced disease resistance, and the inhibited ger-mination of spores. This is thought to be brought about by means of the extract’s action on the surface of the leaves themselves and stimulatory effect on the asso-ciated circum-phyllospheric micro-organisms. Bacteria, yeasts and fungi present in the extracts have been shown to be active agents, while evidence points to a number of organic chemicals, including phenols and various amino acids, also 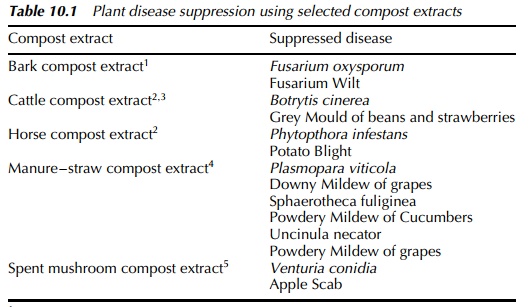 having a role in the suppression effect. The exact nature of this action is not fully understood, but it would seem to be principally a biological control, since it has been known for some time that fine filtration and sterilisation by heat treatment, significantly reduce the extract’s effectiveness (Trankner 1992).

Compost teas are prepared for use by either aerated or fermented extraction methods. So-called ‘fermented’ extraction was the original, first developed in Germany and it is not, in fact, a fermentative process at all. Actually an infusion method, this requires a suspension of compost in water to be made, in a ratio typically around 1:6 by volume. The resultant mixture is allowed to stand for a given period, usually between 3 – 7 days, then coarsely filtered prior to being used. The second method, which came out of research in Austria and the USA, is more active and, with a typical cycle period of around 10 – 12 hours, derives the product in much shorter time. The acceleration is achieved by increasing the oxygen transfer to the extract during formation, initially by passing water through compost, collecting the resultant liquor and recirculating it many times to concentrate and aerate. Once prepared by either method, the finished product is used as a foliar drench, typically applied to commercial crops at a rate of around 1000 litres per hectare (100 gallons per acre).

The abilities of properly prepared biowaste composts themselves to suppress and control soil-borne plant diseases, especially where mature compost is directly mixed with the soil itself have been established (Serra-Wittling, Houot and Labou-vette 1996). The efficacy of the protection given by this kind of incorporation with soil known to be conducive to plant pathogens has also been demonstrated.

In particular, the deleterious effects of various species of Phythium, Phytophthora and Fusarium as well as Rhizoctonia solani, which is a major threat to many kinds of young plants, are largely suppressed or controlled. For many years the horticultural industry had been aware, anecdotally and from experience, that com-posted tree bark suppressed root rots caused by Phytophthora spp. Investigations of this revealed that plants which require the presence of vasicular arbuscular mycorrhizae (VAM), small fungi around the roots, which are intimately involved in nutrient and water uptake, grow better in blends of soil and bark compost than in methyl bromide treated soil alone. Various bacteria, fungi and yeast, largely indigenous to the original compost, have subsequently been indicated as active agents in the overall effect. The biological nature of the control has been estab-lished in laboratory trials involving heat treatment or microwave exposure of the compost. This significantly altered the microbial balance, resulting in progressive inhibition of suppression and led to 100% plant mortality in some instances. On this basis, the need to ensure that compost is not subjected to extreme tempera-tures during storage or transport becomes a very obvious problem to be avoided in any intended practical application.

The agricultural usage of biowaste-derived products has considerable poten-tial, but public acceptability and quality assurance issues must be major concerns, probably more here than in any other comparable sector. In the UK alone, farm-ers have not been slow to learn the terrible consequences of consumer anxiety. Bovine spongiform encephalopathy (BSE) and the passions raised by genetically modified (GM) crops, or animals reared on them, entering the human food chain has focused attention ever more clearly on supply chain issues. The ramifica-tions, in both economic and social terms, of the foot and mouth disease (FMD) outbreak, which paralysed the UK farming industry throughout 2001, has left the rural community all too well aware of the meaning of biosecurity. Since today’s agri-business is so largely dominated by the demands of the supermarkets, it is neither unreasonable nor unlikely that guaranteed product quality would be a requirement in any industry-wide standard. A clear precedent has already been set in this respect with the involvement of the British Retail Consortium in the evolution of the matrix safety code for the treatment and application of sewage sludge to agricultural land. The drive towards so-called ‘organic’ farming has already fostered a climate of proliferating, and typically widely differing, compost acceptability criteria throughout the world. This is scarcely helpful to the average would-be user of these products, often serving more to confuse than elucidate.

The prospect of widespread uptake in the growth of bioproduction crops in the future has been suggested as one of the routes forward for agriculture. To echo Senator Harkin’s words, farmed resources could well account for much of what is currently derived from crude oil, either directly in the chemical sense as an alternative source of the same product, or indirectly as substitutes. In the final analysis, the acceptance of the latter will, inevitably, depend on factors which are more societal and economic than scientific or technical and as such,largely beyond the scope of this book to discuss. Suffice it to say that, in any novel application, cost is a major issue and although the potential market may be enormous, the commercial benefits must be clear. As discussed before, the attitude of industry will be crucial. There is undoubtedly a strong background interest in bioproducts, but machinery is often extremely expensive, and down-time is costly and inconvenient. Using a bioengineered substitute which has not been tested and approved, often represents a huge commercial gamble, and it is a risk which few enterprises, understandably, can afford to take. It may be some time before the oft-quoted image of vast areas of transgenic crop plants growing the biological equivalents of today’s petroleum-based products, at no more cost than cabbages or corn, finally becomes a commercial reality. However, the beginnings are clear.

The search for a biological method of producing plastics, for example, already shows some promise. The ability of some bacteria to produce natural polymers has been known for some time and a number of attempts at growing plastics have been made. The products typically proved expensive, costing between three and five times as much as ordinary plastic and were generally found to be too brittle for normal use. Poly(hydroxyalkanoates) are a class of natural polymers with thermoplastic properties, which can be synthesised by bacteria, though the process is itself economically uncompetitive. Using green plants as plastics factories promises much greater competitiveness, but guaranteeing the appropriate monomer composition is not easy. One solution was recently demonstrated using genetically modified varieties of oilseed rape and cress, engineered to produce poly(3-hydroxybutyrate-co-3-hydroxyvalerate) (PHBV) a Poly(hydroxyalkanoate) with commercial applicability, within their leaves and seeds (Slater et al. 1999). In effect, this is a perfect example of genetic engineer-ing manipulating the respective strengths of contributory organisms to optimise their functional isolated potential. Inserting the bacterial genes responsible for plastic production into Arabidopsis and Brassica plants, avoids the expense of feed, since photosynthesis naturally provides the necessary carbon and the metabolic flow of intermediates from fatty acid and amino acid synthesis is redi-rected for plastic production. The PHBV biosynthesised in plant plastids appears to be of a marketable type and quality, though the yield was relatively low. The process will need some refining if it is to be a realistic proposition for serious commercial production.

Clearly, if and when it is, returning to the intervention triangle model to consider the agricultural benefits of specifically environmental biotechnology, it will represent a major advance in both ‘clean’ production and pollution con-trol. While the former may largely remain for the future, in many ways the latter is already achievable.