A cloning vector is frequently a plasmid or a bacteriophage (bacterial virus) which must be fairly small and fully sequenced, able to replicate itself when reintroduced into a host cell, thus producing large amounts of the recombinant DNA for further manipulation.

A cloning vector is frequently a plasmid or a bacteriophage (bacterial virus) which must be fairly small and fully sequenced, able to replicate itself when reintroduced into a host cell, thus producing large amounts of the recombinant DNA for further manipulation. Also it must carry on it ‘selector marker’ genes. These are different from the reporter genes described below which are indicators of genomic integrity and activity. A common design of a cloning vector is one which carries two genes coding for antibiotic resistance. The ‘foreign’ gene is inserted within one of the genes so that it is no longer functional therefore it is possible to discriminate by standard microbiology techniques which bacteria are carrying plasmids containing recombinant DNA and which are not. Selector genes may operate on at least two levels, the first at the level of the bacterium, usually Eschericia coli, in which the manipulations are being performed described aboveand the second being at the level of the final product, for example, a higher plant. In this case such a selector gene can be resistance to antibiotics like kanamycin or hygromycin. 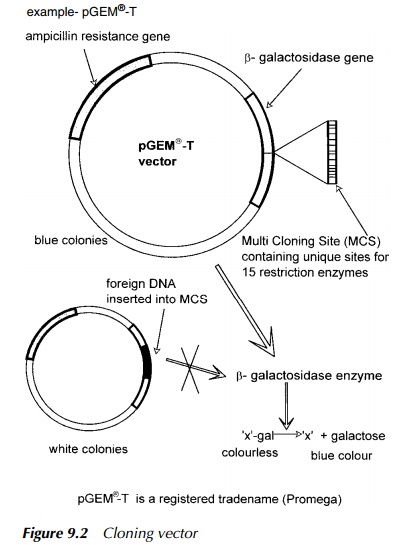 Standard cloning vectors normally carry only selector marker genes required for plasmid construction. To make the manipulations easier, these genes nor-mally contain a multicloning site (MCS) which is a cluster of sites for restriction enzymes constructed in such a way to preserve the function of the gene. Disrup-tion by cloning into any one of these sites will lose the function of that gene and hence, for example, if it codes for antibiotic resistance, will no longer protect the bacterium from that antibiotic. An example is shown in Figure 9.2. This is pGEM (Promega 1996) which has a MCS in the ß-gal gene. This codes for ß-galactosidase from the E. coli lac operon, which has the capacity to hydrolyse x-gal, a colourless liquid, to produce free galactose and ‘x’ which results in a blue pigment to the colony. Thus the screening for successful insertion into the MCS is a simple scoring of blue (negative) or white (possibly positive) colonies. The success of the experiment can be determined quickly as this cloning vector also has sequences at either side of the MCS which allows for rapid DNA sequencing. 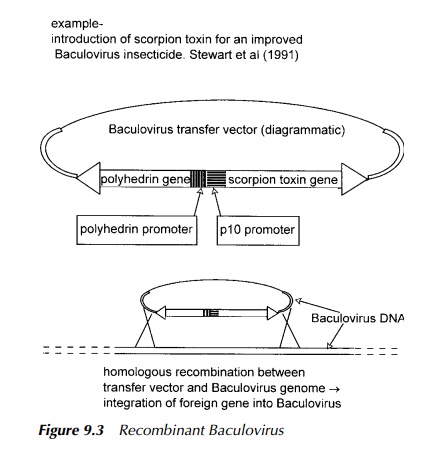 Additionally, some eukaryotic viruses may be used as vectors but these tend to be so large that direct cloning into them is difficult. A solution to this is to carry out manipulations on the desired DNA fragment cloned into a bacterial plasmid and then transfer the engineered piece into the virus thus making a recombinant eukaryotic virus. One such virus now used extensively in genetic engineering, both as a cloning vehicle and as an excellent expression vector, is Baculovirus illustrated in Figure 9.3 which is also effective as a bioinsecticide.