The genus Streptococcus includes a large and varied group of bacteria. They inhabit various sites, notably the upper respiratory tract. However, some species of which Streptococcus pyogenes is the most important and are highly pathogenic. The name Streptococcus is derived from Greek word ‘Streptos’ which means twisted or coiled.

• They are Gram positive, spherical or oval cocci and arranged in chains (0.6µm–1µm) 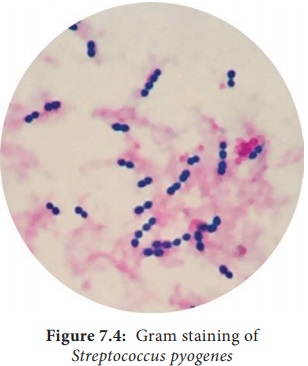 • They are aerobe and facultative anaerobe. Optimum temperature is 37°C and pH is 7.4 to 7.6

• They grow only in media enriched with blood or serum. It is cultivated on blood agar. On blood agar, the colonies are small, circular, semitransparent, low convex, with an area of clear hemolysis around colonies (Figure 7.5). 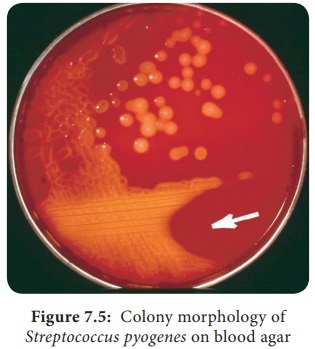 Toxins and Enzymes: Streptococcus pyogenes produces several exotoxins and enzymes which contribute to its virulence.

Toxins and Hemolysins: Streptococci produces two types of hemolysins which are Streptolysin O and Streptolysin S.

Erythrogenic toxin: (Pyrogenic exotoxin) - The induction of fever is the primary effect of this toxin and it is responsible for the rash of scarlet fever.

Table 7.3: Enzymes of Streptococcus pyogenes and its virulence nature 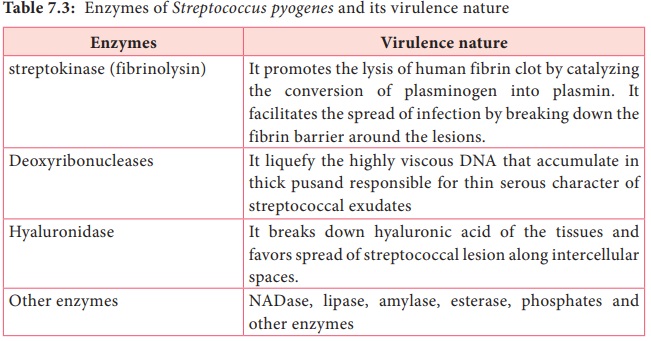 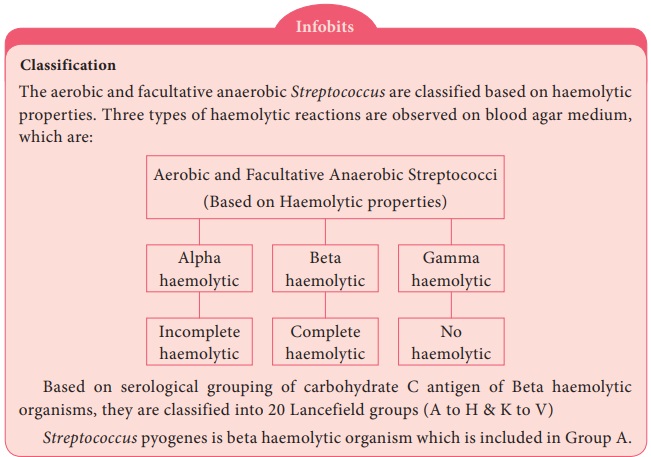 streptokinase (fibrinolysin): It promotes the lysis of human fibrin clot by catalyzing the conversion of plasminogen into plasmin. It facilitates the spread of infection by breaking down the fibrin barrier around the lesions.

Deoxyribonucleases: It liquefy the highly viscous DNA that accumulate in thick pusand responsible for thin serous character of streptococcal exudates

Hyaluronidase: It breaks down hyaluronic acid of the tissues and favors spread of streptococcal lesion along intercellular spaces.

Other enzymes: NADase, lipase, amylase, esterase, phosphates and other enzymes

Streptokinase: It is given intravenously for the treatment of early myocardial infarction and other thromboembolic disorders. Streptococcus equisimilis is the source of streptokinase used for thrombolytic therapy in patients

Streptococcus pyogenes is intrinsically a much more dangerous pathogen than Staphylococcus aureus and has a much greater tendency to spread in the tissues.

Mode of transmission: Streptococcal infections are transmitted by the following ways: 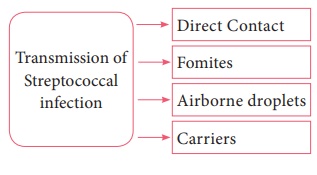 Streptococcal diseases may be broadly classified, and it is shown in flowchart 7.1 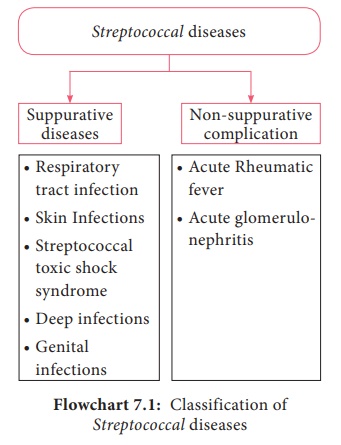 b. Scarlet fever: The disease consists of combination of sore throat and a generalized erythematous (redness of skin or mucous membranes) rash..

a. Erysipeals: It is an acute spreading lesion. The skin shows massive brawny oedema with erythema it is seen in elderly persons or elders.

It is a skin infection that occurs most often in young children. It consists of superficial blisters that break down and eroded areas whose surface is covered with pus. It is the main cause leading to acute glomerulonephritis in children.

c. Necrotizing fasciitis: It is an invasive, infection characterized by inflammation and necrosis of the skin, subcutaneous fat and fascia. It is a life-threatening infection

The strain which cause necrotizing fasciitis to have been named as “Flesh eating bacteria or” killer bacteria.

Streptococcal pyrogenic exotoxin leads to streptococcal toxic shock syndrome (TSS). It is a condition in which the entire organ system collapses, leading to death.

Streptococcus pyogenes may cause pyaemia (blood poisoning characterized by pus forming pathogens in the blood) septicemia (A condition in which bacteria circulate and actively multiply in the bloodstream) abscess in internal organs such as brain, lung, liver and kidney.

Streptococcus pyogenes infections are sometimes followed by two important non – suppurative complications which are, acute rheumatic fever and acute glomerulonephritis. These complications occur 1–4 weeks after the acute infection and it is believed to be the result of hypersensitivity to some streptococcal components

It is often preceded by the skin infection. It is caused by only a few “nephritogenic types (strains)”. It develops because some components of glomerular basement membrane are antigenically similar to the cell membranes of nephritogenic streptococci. The antibodies Formed against Streptococci cross react with glomerular basement membrane and damage. Some patients develop chronic glomerulonephritis with ultimate kidney failure.

Specimens: Clinical specimens are collected according to the site of lesion. Throat swab, pus or blood is obtained for culture and serum for serology.

Direct Microscopy: Gram stained smears of clinical specimens is done, where Gram positive cocci in chains were observed. It is indicative of streptococcal infection.

Catalase test: Streptococci are catalase negative which is an important test to differentiate Streptococci fromStaphylococci.

Serology: Serological tests are done for rheumatic fever and glomerulonephritis. It is established by demonstrating high levels of antibody to streptococci toxins. The standard test is antistreptolysin Otitration. ASOtitres higher than 200 units are indicative of prior Streptococcal infection.

• Penicillin G is the drug of choice

• In patients allergic to penicillin, erythromycin or cephalexin is used.

• Antibiotics have no effect on established glomerulonephritis and rheumatic fever.

• Prophylaxis is indicated only in the prevention of rheumatic fever, it prevents streptococcal reinjection and further damage to the heart.

Fact: It is the oils and fats in many chocolate products, and not chocolate itself, that promote sebum production and subsequent acne. Chocolate in low-fat chocolate milk and in fat-free chocolate candies does not encourage acne. Acne suffers do not need to give up chocolate, they need to reduce their lipid consumption.