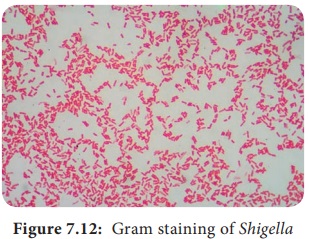 • They are aerobes and facultative anaerobes. Optimum temperature is 37°C and optimum pH – 7.4.

• They can be grown on the following media and show the characteristic colony morphology (Table 7.10 & Figure 7.13). 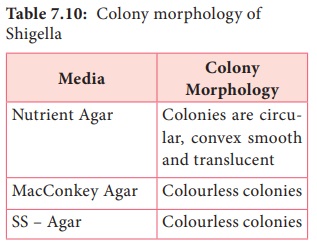 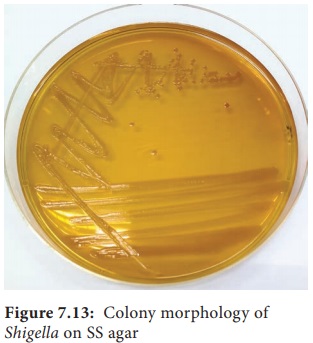 Shigella dysenteriae produces toxins, which is of 3 types, namely, endotoxin, exotoxin and verocytotoxin. The mode of action of these toxins is illustrated in the Table 7.11 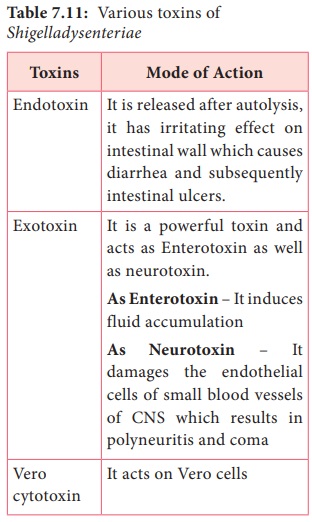 The pathogenic mechanism of Shigella dysenteriaeis discussed below in flowchart 7.5.

Source of Infection – Patient or carriers

• Hemolytic uremic syndrome (It is a condition caused by the abnormal destruction of red blood cells).

Culture: For inoculation, it is best to use mucus flakes (if present in the specimen) on MacConkey agar and SS agar. After overnight incubation at 37°C, the plates are observed for characteristic colonies, which is confirmed by Grams staining and biochemical reactions.

• Uncomplicated shigellosis is a self – limiting condition that usually recovers spontaneously.

• In all severe cases, the choice of antibiotic should be based on the sensitivity of prevailing strain.

• Many strains are sensitive to Nalidixic acid and Norfloxacin.Improving personal and environmental sanitation.

• The detection and treatment of patients and carriers.