The genus Clostridium consists of anaerobic, spore forming Gram positive bacilli. The spores are wider than the bacterial bodies, giving the bacillus a swollen appearance resembling a spindle. The name Clostridium is derived from the word ‘kluster’ (a spindle). Most species are saprophytes found in soil, water and decomposing plant and animal matter. Some of the pathogens are normal flora of intestinal tract of human and animals.

The genus Clostridium includes bacteria that causes 3 major diseases of human – Tetanus, gas gangrene and food poisoning. Clostridium pathogenicity is mainly due to production of a powerful exotoxin.

Clostridium of medical importance may be classified based on diseases they produce, which is given the Table (7.7).

They are Gram positive spore forming rods. The spores are spherical and terminal in position giving a drumstick appearance. They are motile and non – capsulated.

• They are obligate anaerobes, optimum temperature is 37°C and pH is 7.4.

• It grows on ordinary media, but growth is enhanced by addition of blood and serum. Clostridia tetani grows on the following media and show the characteristic colony morphology (Table 7.8). 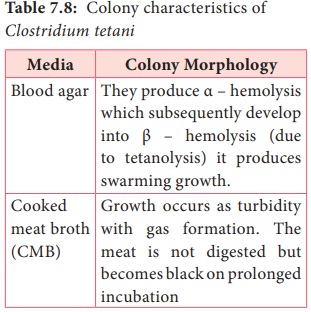 • It lysis erythrocytes and also acts as neurotoxin.

• It is heat labile and oxygen stable powerful neurotoxin

• Mode of Action: Tetanospasminis a neurotoxin, which blocks the release of inhibitory neurotransmitters (glycine and gamma – amino butyric acid) across the synaptic junction. The toxin acts presynaptically, the abolition of spinal inhibition causes uncontrolled spread of impulses in CNS (Central Nerves System). This results in muscle rigidity and spasms (due to the simultaneous contraction of agonists and antagonists, in the absence of reciprocal inhibition Figure 7.11). 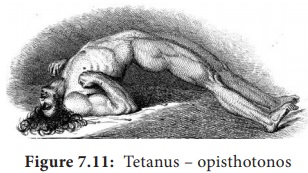 Route of entry – Through wound

Route of entry – Through wound 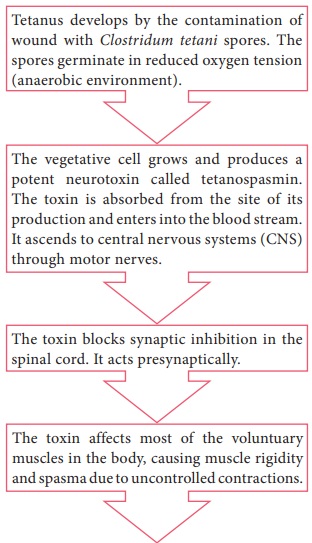 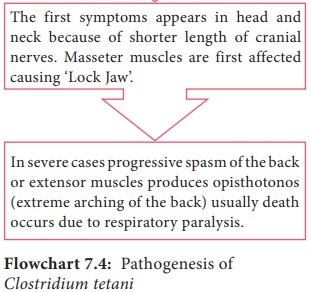 It includes, pain and tingling at the site of wound, Lock jaw ortrismus (It is reduced opening of the jaws), Risus sardonicus (mouth kept slightly open), Dysphasia (impairment of the ability to speak or to understand language) and acute asphyxia.

Myth: Rust causes tetanus if introduced into a wound – for example, by stepping on a rusty nail.

Fact: Rusty nails are more likely to be contaminated with tetanus endospores because they have been exposed to soil and dust longer than new, rust free nails. Any object that causes a wound, rusty or not, can inoculate the tissue with the bacterial endospores of C. tetani. Rust itself neither causes tetanus nor makes it worse.

Culture: The clinical specimen is inoculated on blood agar and incubated at 37°C for 24–48 hours under anaerobic conditions. The colonies are confirmed by gram staining, where it shows gram positive bacilli with drumstick appearance

Tetanus patients are treated in special isolated units, to protect them from noise and light which may provoke convulsions. The spasm can be controlled by diazepam (0.1–0.2 mg/kg) injection. Antibiotic therapy with penicillin or metronidazole should be done for a week or more.

Clostridium difficile is the causative agent of antibiotic associated colitis. It is an acute colitis with or without pseudo membrane formation. It is animportant complication in patients on oral antibiotic therapy. Many antibiotics have been incriminated but lincomycin and clindamycin are particularly prone to cause pseudomembranous colitis.

It is done by the following methods, which are as follows.

a. Surgical prophylaxis: It aims at removal of foreign body, blood clots and damaged tissue in order to prevent anaerobic conditions favorable for the germination of spores.

b. Immunoprophylaxis: Tetanus is a preventable disease. Immune prophylaxis is of 3 types, which is given in the (Table 7.9)

Clostridial Toxins As Therapeutic AgentsBotulinum toxin is the most poisonous substance known, is being used for the treatment of specific neuromuscular disoders characterized by involuntary muscl contraction. Since approval of Botulinu toxin (botox) by the FDA in 1989 for 3disorders – Strabismus (crossing of th eyes), blepharospasm (spasmodic contraion of eye muscles) and hemifacial spasm (contraction of one side of the face).

In 2000, dermatologists and plastic surgeons began using Botox to eradicate wrinkles caused by repeated muscle contractions as we laugh, smile or frown.