The genus Mycobacterium is distinguished by its thick, complex, lipidrich waxy cell walls. This high lipid content (Mycolic acids) imparts the characteristic of acid fastness or resistance to decolorizationby a strong acid after staining with carbol fuchsin. Many of the Mycobacterial species are saprophytes but several species are highly significant human pathogens. Mycobacterium tuberculosis is the causative agent of tuberculosis (TB) It is a killer disease and ranks as one of the most serious infection diseases of the developing countries. TB is primarily a disease of the lungs but may spread to other sites of the body.

They are acid fast bacilli, slightly curved rods, it may occur singly or in small clumps. They are non–motile, non–sporing, and non-capsulated.

They are obligate aerobe, optimum temperature is 37°C and optimum pH is 6.4–7.0. The pathogen grows on an enriched culture media – Lowenstein Jensen medium. The colonies appear in about 2–3 weeks. The colonies are dry, rough, raised, irregular colonies with a wrinkled surface. Initially creamy white and becoming yellowish later (Figure 7.19). 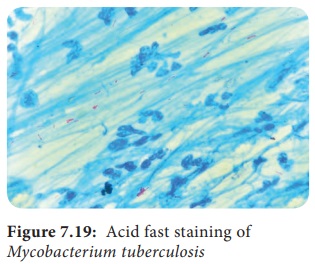 Secondary TB – (Post primary TB) It is caused by reactivation of the primary lesion or by exogenous reinfection. Granulomas of secondary TB most often occur in the apex of the lungs. The necrotic element of the reaction causes tissue destruction and the formation of large area of caseation termed tuberculomas. The presence of caseous necrosis and cavities are two important clinical manifestations of secondary TB. The cavities may rupture into blood vessels, spreading the bacilli throughout the body and break into airways, releasing the pathogen in aerosols and sputum - called as open tuberculosis (Figure 7.20). 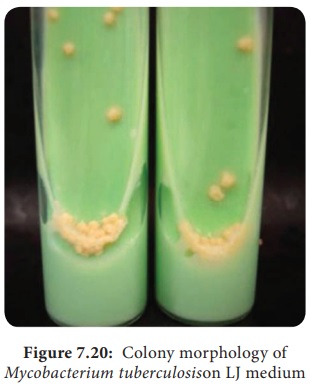 It includes, cough that lasts for more than 2–3 weeks, weight loss, fever, night sweat and loss of appetite.

HOTS: M. tuberculosis the world’s most deadly pathogen why?

Specimen: In case of pulmonary tuberculosis the most usual specimen is sputum.

Direct Microscopy: Smear is made from the sputum specimen and stained by Ziehl Neelson technique. It is examined under oil immersion objective lens. The acid fast bacilli appear as bright red bacilli against a blue background.

Culture: The specimen is inoculated nto LJ – medium and incubated at 37°C f2 weeks the tubercle bacilli usuallrow in 2–8 weeks. The bacterial growth is confirmed by Ziehl – Neelsonstaining.

Mantoux test: This method has been used routinely. In thistest 0.1 ml of PPD (Purified protein deivative) containing 5 TU (Tuberculin unit) is injected intradermally on the flexor aspect of forearm (Figure 7.21) Theite is examined after 48–72 hours and induration are measured (diameter in mm)

Negative test: Indurations of 5 mm or less is negative.

It is an automated diagnosis test it detects DNA sequences specific for M. tuberculosis and rifampicin resistance by PCR. Results can be obtained within 2 hours.

Bacteriostatic agents – Ethambutol (E). The regimen for treating TB consists of an intensive phase of 2 months of isoniazid, rifampin, pyrazinamide and ethambutol, followed by a continuation phase of 4 months of isonizid and Rifampin.

The BCG (Bacille – Calmette – Guerin) administered by intradermal injection of the live attenuated vaccine. The immunity may last for about 10 years.

4.Cover the mouth with a tissue when you cough or sneeze.

MDR-TB: Multidrug resistance tuberculosis refers to resistance to rifampian and Isoniazid. MDR-TB is a global problem especially in HIV-patients.

XDR-TB: Exensively drug resistance tuberculosis refer M.tuberculosis strains which are resistant to any fluoroquinolone and at lecest one of 3 injectable second line drugs (Kanamycin, Capreomycin and Amikarin), in addition to Isoniazid and rifampicin

24 a March is celebrated as World Tuberculosis day