• They are non-motile and non-sporing and few strains are capsulated. 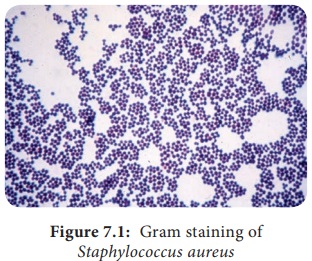 The grape like cluster formation in Staphylococcus aureus is due to cell division occurring in three perpendicular planes, with daughter cells tending to be remaining in close proximity.

• They are aerobes and facultative anaerobes, optimal temperature is 37°C and optimum pH is 7.4–7.6.

• They grow on the following media and shows the characteristic colony morphology (Table 7.1 & Figure 7.2). 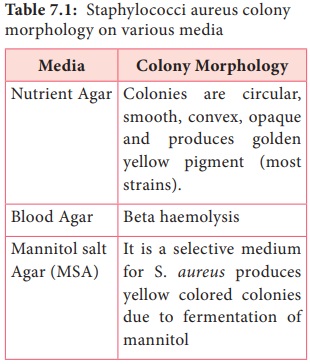 Mannitol salt Agar (MSA): It is a selective medium for S. aureus produces yellow colored colonies due to fermentation of mannitol 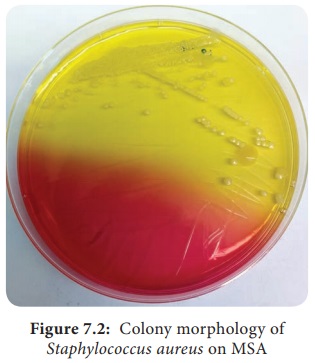 1. Peptidoglycan → It is a polysaccharide polymer. It activates complement and induces the release of inflammatory cytokines

2. Teichoic acid → it facilitates adhesion of cocci to the host cell surface. Protein A → It is chemotactic, antiphagocytic, anticomplementary and induce platelet injury.

• Hemolysins – It is an exotoxin, those lysis red blood cells. They are of four types namely α-lysin, β-lysin, γ-lysin and delta lysin.

• Enterotoxin – It is responsible for manifestations of Staphylococcus food poisoning.

5. Enzymes: S. aureus produces several enzymes, which are related to virulence of the bacteria.

• Coagulase – It clots human plasma and converts fibrinogen into fibrin.

• Staphylokinase – It has fibrinolytic activity.

• Hyaluronidase – It hydrolyzes hyaluronic acid of connective tissue, thus facilitates the spread of the pathogens to adjacent cells.

S. aureus is an opportunistic pathogen which causes infection most commonly at sites of lowered host resistance. (Example: damaged skin)

Mode of Transmission: Staphylococcus infections are transmitted by the following ways.

Why many hospitalized patients are at increased risk for opportunistic infection? 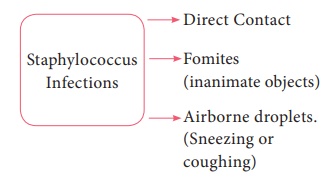 Staphylococcal diseases may be classified as 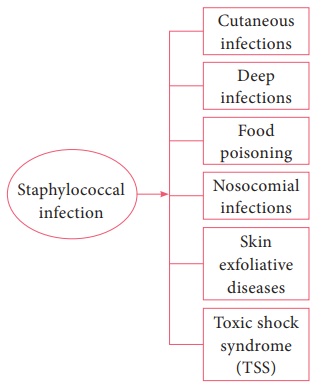 It includes the following infections, which are as follows:

Exfoliative diseases: These diseases are produced due to the production of epidermolytic toxin. The toxin separates the outer layer of epidermis from the underlying tissues leading to blistering disease. The most dramatic manifestation of this toxin is scalded skin syndrome. The patient develops painful rash which slough off and skin surface resembles scalding.

HOTS: Why most infections acquired through the skin are non-communicable diseases?

Toxic shock syndrome toxin: It is caused by TSST-1 and characterized by high fever, hypotension (low blood pressure), vomiting, diarrhea and erythematous rash. TSS became widely known in association with the use of vaginal tampons by menstruating women but it occurs in other situations also.

Specimens: The clinical specimens are collected according to the nature of Staphylococcal infections, which is given in the (Table 7.2). 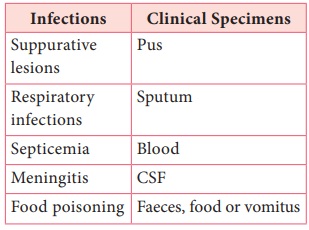 Specimens should be transported immediately to the laboratory and processed.

Culture: The collected specimen is inoculated on selective media-MSA and the media incubated at 37°C for 18–24 hours. Next day culture plates are examined for bacterial colonies, which are identified by gram staining, colony morphology and biochemical tests such as 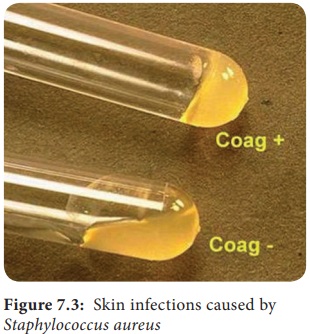 Control measures: Proper sterilization of medical instruments must be done. Intake of antibiotics must be taken under proper medical advice. The detection of source & carriers among hospital staff, their isolation and treatment should be practiced.