At high altitudes to the atmosphere consists of a layer of ozone (O3) which acts as an umbrella or shield for harmful UV radiations.

At high altitudes to the atmosphere consists of a layer of ozone (O3) which acts as an umbrella or shield for harmful UV radiations. It protects us from harmful effect such as skin cancer. UV radiation can convert molecular oxygen into ozone as shown in the following reaction. 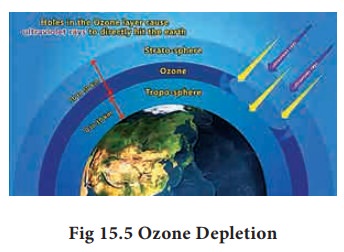 In recent years, a gradual depletion of this protective ozone layer has been reported. Nitric oxide and CFC are found to be most responsible for depletion of ozone layer.

Generally substances that cause depletion of ozone or make it thinner are called Ozone Depletion Substances abbreviated as ODS. The loss of ozone molecules in the upper atmosphere is termed as depletion of stratospheric ozone.

Nitrogen oxides introduced directly into the stratosphere by the supersonic jet aircraft engines in the form of exhaust gases.

These oxides are also released by combustion of fossil fuels and nitrogen fertilizers. Inert nitrous oxide in the stratosphere is photo chemically converted into more reactive nitric oxide. Oxides of nitrogen catalyse the decomposition of ozone and are themselves regenerated. Ozone gets depleted as shown below.

Thus NO is regenerated in the chain reaction.

The chloro fluoro derivatives of methane and ethane are referred by trade name Freons. These Chloro Fluoro Carbon compounds are stable, non- toxic, noncorrosive and non-inflammable, easily liquefiable and are used in refrigerators, air- conditioners and in the production of plastic foams. CFC’s are the exhaust of supersonic air craft’s and jumbo jets flying in the upper atmosphere. They slowly pass from troposphere to stratosphere. They stay for very longer period of 50 – 100 years. In the presence of uv radiation, CFC’s break up into chlorine free radical

Chlorine radical is regenerated in the course of reaction. Due to this continuous attack of Cl˚ thinning of ozone layer takes place which leads to formation of ozone hole.

It is estimated that for every reactive chlorine atom generated in the stratosphere 1,00,000 molecules of ozone are depleted.

Depletion of ozone layer will allow more UV rays to reach the earth surface and layer would cause skin cancer and also decrease the immunity level in human beings.

UV radiation affects the growth of phytoplankton, as a result ocean food chain is disturbed and even damages the fish productivity.