Earth’s atmosphere is a layer of gases retained by the earth’s gravity.

Earth’s atmosphere is a layer of gases retained by the earth’s gravity. It contains roughly 78% nitrogen, 21% oxygen, 0.93% argon, 0.04% carbon dioxide, trace amounts of other gases and little amount of water vapour. This mixture is commonly known as air.

Earth’s atmosphere can be divided into different layers with characteristic altitude and temperature. The various regions of atmosphere are given in table 15.1. 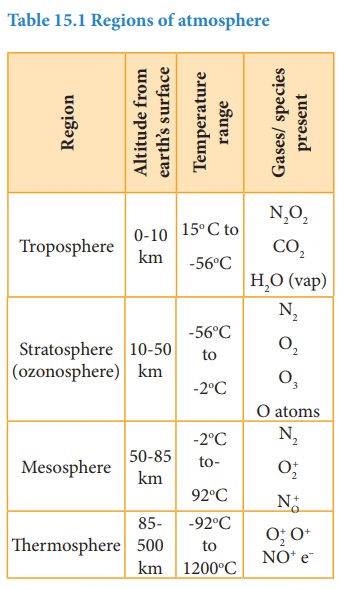 Hydrosphere includes all types of water sources like oceans, seas, rivers, lakes, streams, underground water, polar icecaps, clouds etc. It covers about 75% of the earth’s surface. Hence the earth is called as a blue planet.

Lithosphere the includes soil, rocks and mountains which are solid components of earth.