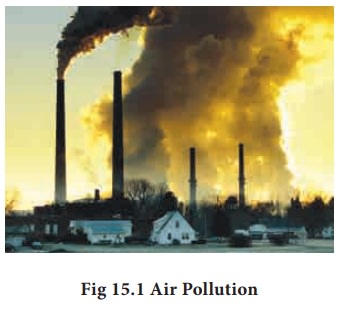 Oxides of sulphur, oxides of nitrogen, oxides of carbon, and hydrocarbons are the gaseous air pollutants.

a. Oxides of Sulphur

Sulphur dioxide is oxidised into more harmful sulphur trioxide in the presence of particulate matter present in polluted air .

SO3 combines with atmospheric water vapour to form H2SO4 , which comes down in the form of acid rain.

Some harmful effects of acid rain will be discussed in section 15.3

b. Oxides of nitrogen

The oxides of nitrogen are converted into nitric acid which comes down in the form of acid rain. They also form reddish brown haze in heavy traffic. Nitrogen dioxide potentially damages plant leaves and retards photosynthesis. NO 2 is a respiratory irritant and it can cause asthma and lung injury. Nitrogen dioxide is also harmful to various textile fibres and metals.

The major pollutants of oxides of carbon are carbon monoxide and carbon dioxide.

Carbon monoxide is a poisonous gas produced as a result of incomplete combustion of coal are firewood. It is released into the air mainly by automobile exhaust. It binds with haemoglobin and form carboxy haemoglobin which impairs normal oxygen transport by blood and hence the oxygen carrying capacity of blood is reduced. This oxygen deficiency results in headache, dizziness, tension, Loss of consciousness, blurring of eye sight and cardiac arrest.

Carbon dioxide is released into the atmosphere mainly by the process of respiration, burning of fossil fuels, forest fire, decomposition of limestone in cement industry etc.

Green plants can convert CO2 gas in the atmosphere into carbohydrate and oxygen through a process called photosynthesis. The increased CO 2 level in the atmosphere is responsible for global warming. It causes headache and nausea.

The compounds composed of carbon and hydrogen only are called hydrocarbons. They are mainly produced naturally (marsh gas) and also by incomplete combustion of automobile fuel.

They are potential cancer causing (carcinogenic) agents. For example, polynuclear aromatic hydrocarbons (PAH) are carcinogenic, they cause irritation in eyes and mucous membranes.

In 1987, Jean Baptiste Fourier a  French  mathematician  and  scientist coined the term“Greenhouse Effect” for trapping of heat in the atmosphere by certain gases. 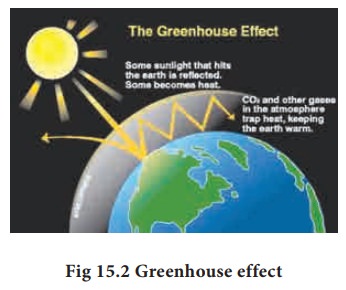 The earth’s atmosphere allows most of the visible light from the Sun to pass through and reach Earth’s surface. As Earth’s surface is heated by sunlight, it radiates part of this energy back toward space as longer wavelengths (IR).

Some of the heat is trapped by CH4, CO2, CFCs and water vapour present in the atmosphere. They absorb IR radiation and effectively block a large portion of earth’s emitted radiation. The radiation thus absorbed is partly reemitted to earth’s surface. Therefore, the earth’s surface gets heated up by a phenomenon called greenhouse effect.

During the past 100 years, the amount of carbon dioxide in the atmosphere increased by roughly 30 percent and the amount of methane more than doubled.If these trends continue, the average global temperature will increase which can lead to melting of polar ice caps and flooding of low lying areas. This will increase incidence of infectious diseases like dengue, malaria etc.

Rain water normally has a pH of 5.6 due to dissolution of atmospheric CO2 into it. Oxides of sulphur and nitrogen in the atmosphere may be absorbed by droplets of water that make up clouds and get chemically converted into sulphuric acid and nitric acid respectively as a results of pH of rain water drops to the level 5.6, hence it is called acid rain.

Acid rain is a by-product of a variety of sulphur and nitrogen oxides in the atmosphere. Burning of fossil fuels (coal and oil) in power stations, furnaces and petrol, diesel in motor engines produce sulphur dioxide and nitrogen oxides. The main contributors of acid rain are SO2 and NO2 .They are converted into sulphuric acid and nitric acid respectively by the reaction with oxygen and water.

Some harmful effects are discussed below.

i. Acid rain causes extensive damage to buildings and structural materials of marbles. This attack on marble is termed as Stone leprosy.

iii. It is harmful for agriculture, trees and plants as it dissolves and removes the nutrients needed for their growth.

iv. It corrodes water pipes resulting in the leaching of heavy metals such as iron, lead and copper into the drinking water which have toxic effects.

v. It causes respiratory ailment in humans and animals. 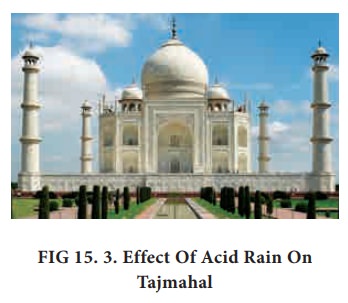 Particulate in the atmosphere may be of two types, viable or non-viable.

The viable particulates are the small size living organisms such as bacteria, fungi, moulds, algae, etc. which are dispersed in air. Some of the fungi cause allergy in human beings and diseases in plants.

Smoke particulate consists of solid particles (or) mixture of solid and liquid particles formed by combustion of organic matter.

They are formed by particles of spray liquids and condensation of vapours in air.

Fumes are obtained by condensation of vapours released during sublimation, distillation, boiling and calcination and by several other chemical reactions.

i. Dust, mist, fumes,etc., are air borne particles which are dangerous for human health. Particulate pollutants bigger than 5 microns are likely to settle in the nasal passage whereas particles of about 10 micron enters the lungs easily and causes scaring or fibrosis of lung lining. They irritate the lungs and causes cancer and asthma. This disease is also called pneumoconiosis. Coal miners may suffer from black lung disease. Textile workers may suffer from white lung disease.

iii. Particulates in the atmosphere reduce visibility by scattering and absorption of sunlight. It is dangerous for aircraft and motor vehicles

v. Particulates deposit on plant leaves and hinder the intake of CO2 from the air and affect photosynthesis.

The particulates from air can be removed by using electrostatic precipitators, gravity settling chambers, and wet scrubbers or by cyclone collectors. These techniques are based on washing away or settling of the particulates. 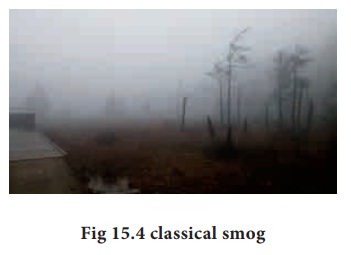 Smog is a chemical mixture of gases that forms a brownish yellow haze over urban cities.Smog mainly consists of ground level ozone, oxides of nitrogen, volatile organic compounds, SO2, acidic aerosols and gases, and particulate matter.

(i) Classical smog or London smog

Classical smog was first observed in London in December 1952 and hence it is also known as London smog. It consists of coal smoke and fog.

It occurs in cool humid climate. This atmospheric smog found in many large cities. The chemical composition is the mixture of SO2, SO3 and humidity. It generally occurs in the morning and becomes worse when the sun rises.

This is mainly due to the induced oxidation of SO2 to SO3, which reacts with water yielding sulphuric acid aerosol.

Chemically it is reducing in nature because of high concentration of SO2 and so it is also called as reducing smog.

a. Smog is primarily responsible for acid rain.

b. Smog results in poor visibility and it affects air and road transport.

Photo Chemical smog was first observed in Los Angels in 1950. It occurs in warm, dry and sunny climate.This type of smog is formed by the combination of smoke, dust and fog with air pollutants like oxides of nitrogen and hydrocarbons in the presence of sunlight.

It forms when the sun shines and becomes worse in the afternoon. Chemically it is oxidizing in nature because of high concentration of oxidizing agents NO2 and O3, so it is also called as oxidizing smog.

Photo chemical smog is formed through sequence of following reactions. 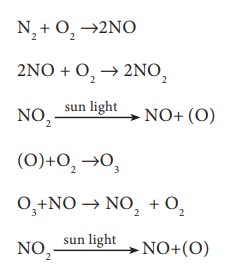 NO and O3 are strong oxidizing agent and can react with unburnt hydrocarbons in polluted air to form formaldehyde,acrolein and peroxy acetyl nitrate(PAN).

High concentrations of ozone and NO can cause nose and throat irritation, chest pain, uncomfortable in breathing, etc.

PAN is toxic to plants, attacks younger leaves and cause bronzing and glazing of their surfaces

The formation of photochemical smog can be suppressed by preventing the release of nitrogen oxides and hydrocarbons into the atmosphere from the motor vehicles by using catalytic convertors in engines. Plantation of certain trees like Pinus, Pyrus, Querus Vitus and juniparus can metabolise nitrogen oxide.