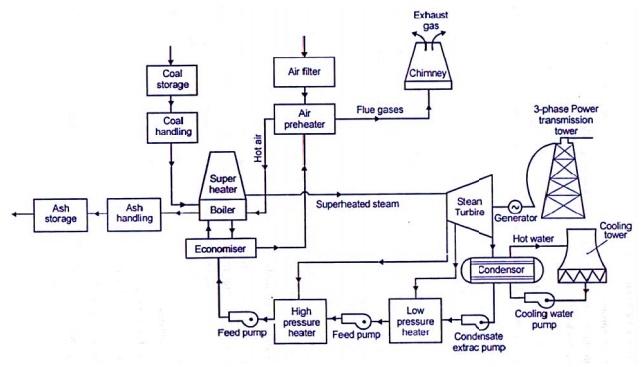 A thermal power station is a power plant in which the prime mo ver is steam driven. Water is heated, turns into ste am and spins a steam turbine which drives an electrical generator.

A thermal power station is a power plant in which the prime mo ver is steam driven. Water is heated, turns into ste am and spins a steam turbine which drives an electrical generator. After it passes through the tur bine, the steam is condensed in a condenser an d recycled to where it was heated; this is known as a Rankine cycle. The greatest variation in t he design of thermal power stations is due to the different fuel sources. Some prefer to use the term energy center because such facilities convertt forms of heat energy into electricity. Some t hermal power plants also deliver heat energy for industrial purposes, for district heating, or for d esalination of water as well as delivering electric al power. A large proportion of CO2 is prod uced by the worlds fossil fired thermal power pla nts; efforts to reduce these outputs are various and widespread. 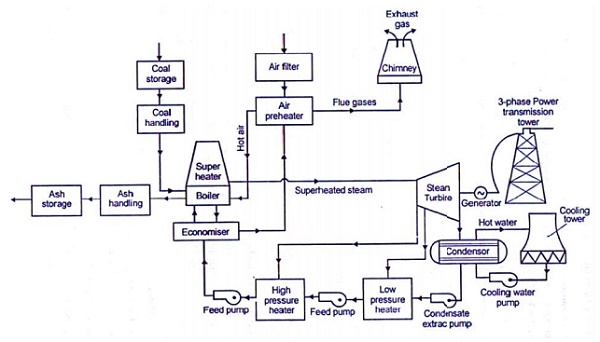 -  Feed Water and Steam Circu it

Coal and Ash circuit in a thermal power plant layout mainly takes care of feeding the boiler with coal from the storage for combustion. The ash that is generated during combustion is collected at the back of the boiler and removed to the ash storage by scrap conveyors. The combustion in the Coal and Ash circuit is controlled by regulating the speed and the quality of coal entering the grate and the damper openings.

Air from the atmosphere is directed into the furnace through the air preheated by the action of a forced draught fan or induced draught fan. The dust from the air is removed before it enters the combustion chamber of the thermal power plant layout. The exhaust gases from the combustion heat the air, which goes through a heat exchanger and is finally let off into the environment.

The steam produced in the boiler is supplied to the turbines to generate power. The steam that is expelled by the prime mover in the thermal power plant layout is then condensed in a condenser for re-use in the boiler. The condensed water is forced through a pump into the feed water heaters where it is heated using the steam from different points in the turbine. To make up for the lost steam and water while passing through the various components of the thermal power plant layout, feed water is supplied through external sources. Feed water is purified in a purifying plant to reduce the dissolve salts that could scale the boiler tubes.

All these circuits are integrated to form a thermal power plant layout that generates electricity to meet our needs.

Ø Generation of power is continuous.

Ø This can be located near the load centre so that the transmission losses are reduced.

Ø It can respond to rapidly changing loads.

Ø Efficiency of plant is less.