In terms of thermodynamics, it may be viewed as a heat-engine that uses an electron gas as a working substance.

A thermionic converter can be analyzed from at least three different points of view:

1.     In terms of thermodynamics, it may be viewed as a heat-engine that uses an electron gas as a working substance.

2.     In terms of electronics, it may be viewed as a diode that transforms heat to electricity by the law of thermionic emission.

3.     In terms of thermoelectricity, it may be viewed as a thermocouple in which an evacuated space or a plasma has been substituted for one of the conductors.

Regardless of the point of view adopted in analysis, a thermionic converter works because of the phenomenon ofthermionic‘ emission Thermionic‘. emission implies emission of electrons from the metal when it is heated.

It is defined as the energy required to extract an electron from the metal. It is measure in electron volts. The value of work function varies with the nature of the metal and its surface condition.

A thermionic converter, in principle, consists of two metals or electrodes with different work functions sealed into an evacuated vessel. The electrode with a large work function is maintained at a higher temperature that one with the smaller work function. 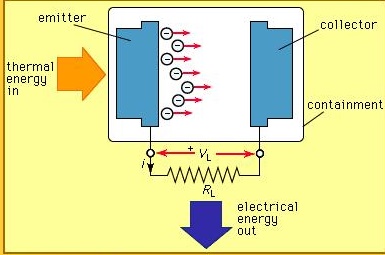 A thermionic converter/generator comprises a heated cathode (electron emitter) and an anode (electron collector) separated by a vacuum, the electrical output circuit being connected between the two as shown in figure. The heat which is supplied to the cathode raises the energy of its electrons to such a level that it enables them to escape from the surface and flow to the anode. At the anode the energy of electrons appears partially as heat, removed by cooling and partially as electrical energy delivered to the circuit. Although the distance between anode and cathode is only about one millimeter, the negative space charge with such an arrangement hinders the passage of the electrons and must be reduced, this can be achieved by introducing positive ions into the interelectrode space, cesium vapour being valuable source of such ions.

In order to materialize a substantial electron emission rate (per unit area of emitter), and hence a significant current output as well as a high efficiency, the emitter temperature in a thermionic converter containing cesium should be atleast 1000°C, the efficiency is then 10 per cent.

Efficiency as high as 40 percent can be obtained by operating at still higher temperatures. Although temperature has little effect on the voltage generated, the increase in current (per unit emitter area) associated with a temperature increase results in increase in power. Electric power

Anode materials should have a low work function e.g., barium and strontium oxides while that of the cathode should be considerable higher, tungsten impregnated with a barium compound being a suitable material. Even with these materials temperatures upto 2000°C will be required to secure for the generator itself, efficiencies of 30-35 percent. Electrical outputs of about 6 W/cm2 of anode surface are envisaged with about 13 W/cm2 removed by coolant.

A thermionic generator, in principle can make use of any fuel (may be fossil fuel, a nuclear fuel or solar energy) subject to the condition that sufficiently high temperatures are obtainable. The thermionic conversion can be utilized in several different situations –remote locations on the earth and in space.

Emitter. A good emitter will:

(i)   have high-electron emission capability coupled with a low rate of deterioration.

(ii)have low emissivity, to reduce heat transfer by radiation from the emitter.

The relative importance of these properties is dependent upon the type of converter being designed. It should be noted that efficiency is a much slower rising function of electron emission capability if space charge is present than if there is no space charge.

The work function may be reduced considerable by an absorbed single layer of foreign atoms. This comes about by the establishment of a dipole layer at the surface. The layer can be formed by atoms or molecules. This is essentially what happens in a cesium converter, which is designed so that cesium condenses on the emitter or collector.

The main criteria for choosing a collector material is that it should have as low a work function as possible. Because the collector temperature is held below any temperature that will cause significant electron emission, its actual emission characteristics are of no consequence. The lower of the collector work function(fc), however the less energy the electron will have to give up as it enters the collector surface. In practice the lowest value of fC than can be maintained stably is about 1.5 eV. For applications in which it is desirable to maintain the collector elevated temperatures (greater than 900°K) such as space applications, an optimum value of fc may be determined. Molybdenum has been widely used as a collector; it is frequently assumed to have a work function of 1.7 eV.