The ocean and seas constitute about 70% of the earth’ssurface area and hence they represent a large storage reservoir of the solar energy. In tropical waters, the surface water temperature is about 27°C and at 1 km directly below, the temperature is about 4°C. The reservoir of surface water may be considered a heat source and the reservoir of cold water (1 km below) is considered a heat sink. The concept of ocean thermal energy conversion is based on the utilization of temperature difference between the heat source and the sink in a heat engine to generate power.

In this cycle, the seawater plays a multiple role of a heat source, working fluid, coolant and heat sink. Warm surface water enters an evaporator where the water is flash evaporated to steam under particle vacuum. Low pressure is maintained in the evaporator by a vacuum pump. The low pressure so maintained removes the non-condensable gases from the evaporator. The steam and water mixture from evaporator then enters a turbine, driving it thus generating electricity. The exhaust from the turbine is mixed with cold water from deep ocean in a direct contact condenser and is discharged to the ocean. The cycle is then repeated. Since the condensate is discharged to the ocean, the cycle is calledopen’. ‘

In the evaporator the pressure is maintained at a value (0.0317 bar) slightly lower than the saturation pressure of warm surface water at 27°C (0.0356 bar). Hence, when the surface water enters the evaporator, it gets ‘superheated’This. super heated water undergoes ‚volume boiling‛ causing the water to partially flash to steam. 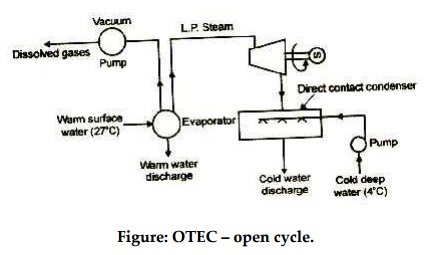 Here, a separate working fluid such as ammonia, propane or Freon is used in addition to water. The warm surface water is pumped to a boiler by a pump. This warm water gives up its heat to the secondary working fluid thereby losing its energy and is discharged back to the surface of the ocean. The vapours of the secondary working fluid generated in the boiler, drive a turbine generating power. The exhaust from the turbine is cooled in a surface condenser by using cold deep seawater, and is then circulated back to the boiler by a pump. 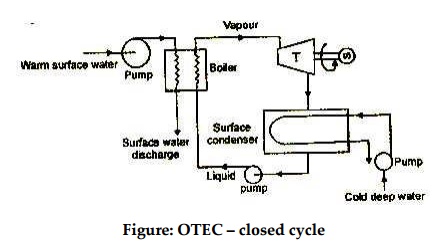 1.     Ocean is an infinite heat reservoir which receives solar incidence throughout the year.