These tumours often arise in skin damaged by long-term ultraviolet radiation and also by X-rays and infrared rays. Other carcinogens include pitch, tar, mineral oils and inorganic arsenic (see Basal cell carci-noma). Certain rare genetic disorders, with defective DNA repair mechanisms, such as xeroderma pigmen-tosum, lead to multiple squamous and basal cell carcinomas, and to malignant melanoma; this illustrates the importance of altered DNA in the pathogenesis of malignancy. The DNA of the human papilloma virus  can be integrated into the nuclear DNA of keratinocytes and cause malignant transformation. Immunosuppression and ultraviolet radiation predispose to this.

Tumours may arise as thickenings in an actinic ker-atosis or, de novo, as small scaling nodules; rapidly growing anaplastic lesions may start as ulcers with a granulating base and an indurated edge (Fig. 18.36). Squamous cell carcinomas are common on the lower lip (Fig. 13.36) and in the mouth. Tumours arising in areas of previous X-radiation or thermal injury, chronic draining sinuses, chronic ulcers, chronic inflammation or Bowen’s disease are the most likely to metastasize. Tumours arising in non-exposed sites, such as the perineum and sole of foot and on the ear and lip, have a lesser malignant potential but may metastasize. Squamous cell carcinomas arising in sun-exposed areas and in actinic keratoses seldom metastasize. Tumours more than 2 cm in diameter are twice as likely to recur and metastasize compared with smaller tumours. Metastatic potential is also high in tumours greater than 4 mm in depth or invad-ing to the subcutaneous tissue, in poorly differentiated tumours; in tumours with perineural involvement; and in those arising in the immunosuppressed. 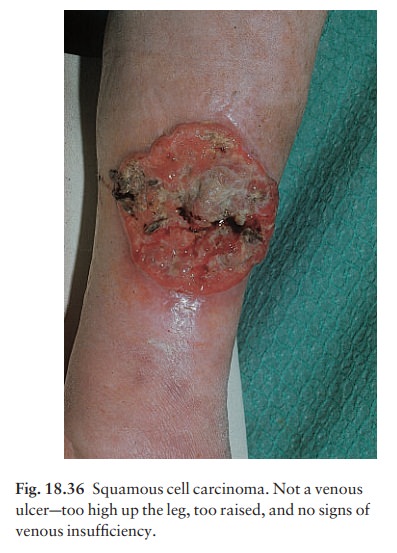 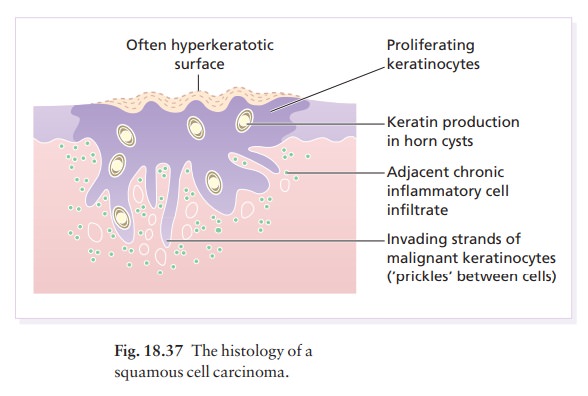 After the diagnosis has been confirmed by biopsy, the tumour should be excised with a 0.5-cm border of normal skin. Mohs’ micrographic surgery is useful for high-risk tumours. Radiotherapy is effective but should be reserved for the frail and the elderly.