This is the most common form of skin cancer. It crops up most commonly on the faces of the middle-aged or elderly. Lesions invade locally but, for practical purposes, never metastasize.

This is the most common form of skin cancer. It crops up most commonly on the faces of the middle-aged or elderly. Lesions invade locally but, for practical purposes, never metastasize.

Prolonged sun exposure is the main factor so these tumours are most common in white people living near the equator. They may also occur in scars caused by X-rays, vaccination or trauma. Photosensitizing pitch, tar and oils can act as cocarcinogens with ultraviolet radiation. Previous treatment with arsenic, once pre-sent in many ‘tonics’, predisposes to multiple basal cell carcinomas, often after a lag of many years.

The syndrome is inherited as an autosomal dominant trait and recent studies indicate that the genetic abnormality lies on chromo-some 9q.

Nodulo-ulcerative. This is the most common type.An early lesion is a small glistening translucent skin-coloured papule that slowly enlarges. Central necrosis, although not invariable, leaves an ulcer with an adherent crust and a rolled pearly edge (Fig. 18.29). Fine telangiectatic vessels often run across the tumour’s surface (Fig. 18.30). Without treatment such lesions may reach 1–2 cm in diameter in 5–10 years. 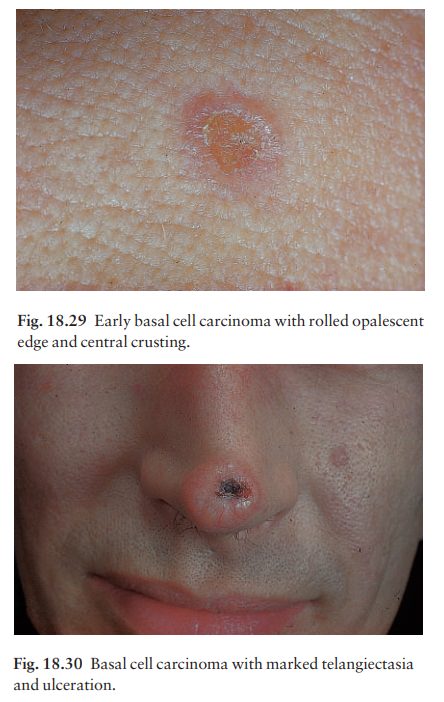 Cystic. The lesion is at first like the nodular type,but later cystic changes predominate and the nodule becomes tense and more translucent, with marked telangiectasia.

Cicatricial (morphoeic). These are slowly expandingyellow or white waxy plaques with an ill-defined edge. Ulceration and crusting, followed by fibrosis, are common, and the lesion may look like an enlarg-ing scar (Fig. 18.31). 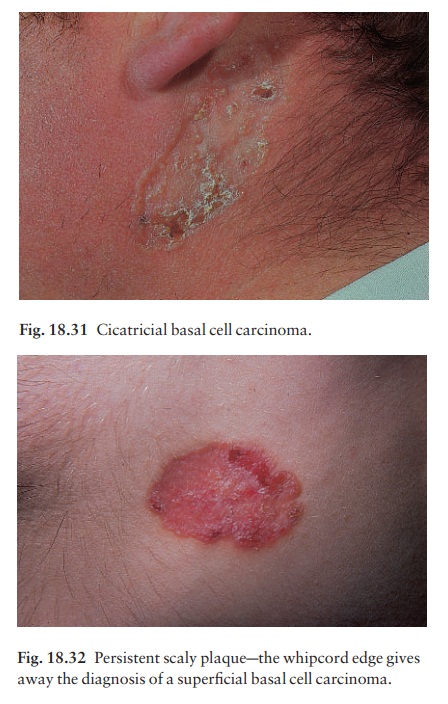 Superficial (multicentric). These arise most often onthe trunk. Several lesions may be present, each expanding slowly as a pink or brown scaly plaque with a fine ‘whipcord’ edge (Fig. 18.32). Such lesions can grow to more than 10 cm in diameter.

Pigmented. Pigment may be present in all types ofbasal cell carcinoma causing all or part of the tumour to be brown or have specks of brown or black within it (Fig. 18.33).

The slow but relentless growth destroys tissue locally. Untreated, a basal cell carcinoma can invade underly-ing cartilage or bone (Fig. 18.34) or damage import-ant structures such as the tear ducts.

Small, darkly blue staining basal cells grow in well-defined aggregates which invade the dermis (Fig. 18.35). The outer layer of cells is arranged in a palisade. Num-erous mitoses and apoptotic bodies are seen. In the cicatricial type the islands of tumour are surrounded by fibrous tissue. 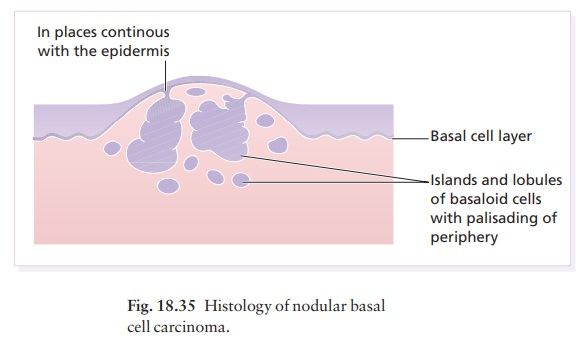 There is no single treatment of choice for all basal cell carcinomas. Treatment should be tailored to the type of tumour, its site and the age and general health of the patient. Published guidelines are very useful (see Further reading).

In general, excision, with 0.5 cm of surrounding normal skin, is the treatment of choice for discrete nodular and cystic tumours in patients under 60 years. Cicatricial tumours, with their ill-defined edges, and lesions near vital structures, should be excised by specialist surgeons. Mohs’ micrographic surgical technique is highly effective; it includes careful histo-logical checks in all planes of tissue excised during the operation. Mohs’ surgery is also becom-ing the treatment of choice for large (> 1 cm) tumours and for those on cosmetically important sites, such as the nose, and for tumours in certain anatomical areas, such as the inner canthus and the nasolabial folds. Radiotherapy is also effective; it is seldom used now for biopsy-proven lesions in patients under 70 years, but is helpful when surgery is contraindicated. Cryo-therapy, curettage and cautery and photodynamic therapy are sometimes useful for superficial lesions. Sometimes palliative treatment with curettage and cautery may be preferable to aggressive treatment for elderly patients in poor health; nowadays there is seldom justification for doing nothing. The 5-year cure rate for all types of basal cell carcinoma is over 95%, but regular follow-up is necessary to detect local recurrences when they are small and remediable.