Malignant melanoma attracts a disproportionate amount of attention because it is so often lethal. The public now knows more about its increasing incidence and dangers.

Malignant melanoma attracts a disproportionate amount of attention because it is so often lethal. The public now knows more about its increasing incidence and dangers.

The incidence in white people in the UK and USA is doubling every 10 years. In Scotland and northern parts of the USA the incidence is now about 10 per 100 000 per year, with females being affected more often than males.

There is a higher incidence in white people living near the equator than in temperate zones and there the female preponderance is lost. The high-est incidence, more than 40 per 100 000 per year, is seen in white people living in Australia and New Zealand. The tumour is rare before puberty and in black people, Asians and Orientals and when it does occur in these races it is most often on the palms, soles or mucous membranes.

Genetic. Malignant melanomas are most common inwhite people with blond or red hair, many freckles and a fair skin that tans poorly. Those of Celtic origin are especially susceptible. Ten to 15% of melanomas are familial (occur in families where two or more first-degree relatives have a melanoma). Molecular defects in both tumour suppressor genes and oncogenes have been linked to these melanomas; the one attracting most interest at present lies on chromosome 9p and encodes a tumour suppressor gene designated p16, also known as CDKN2A. Melanoma may affect sev-eral members of a single family in association with atypical (dysplastic) naevi.

Sunlight. Both the incidence and mortality increasewith decreasing latitude. Tumours occur most often, but not exclusively, on exposed skin.

Eighty per cent of invasive melanomas are preceded by a superficial and radial growth phase, shown clin-ically as the expansion of an irregularly pigmented macule or plaque (Fig. 18.38). Most are multicol-oured mixtures of black, brown, blue, tan and pink. Their margins are irregular with reniform projec-tions and notches. Malignant cells are at first usually confined to the epidermis and uppermost dermis, but eventually invade more deeply and may metastasize (Fig. 18.38).

There are four main types of malignant melanoma. 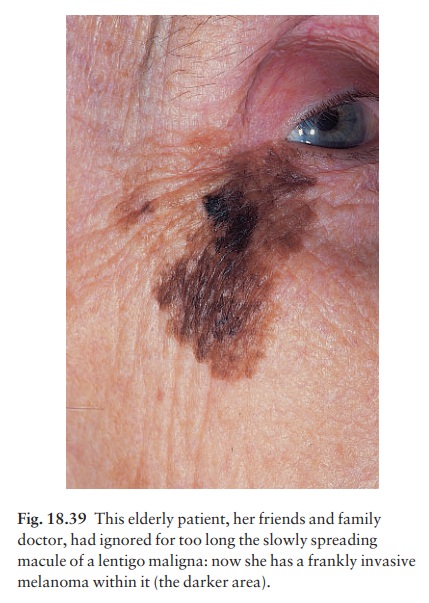 2 Superficial spreading melanomais the mostcommon type in Caucasoids. Its radial growth phase shows varied colours and is often palpable (Figs 18.40 and 18.41). A nodule coming up within such a plaque signifies deep dermal invasion and a poor prognosis (Table 18.4). 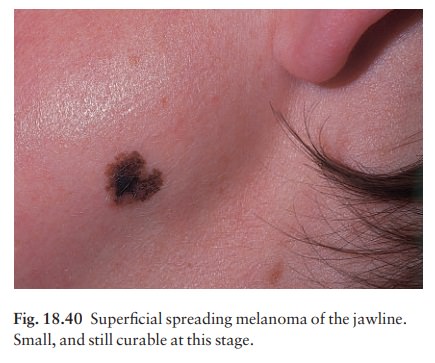 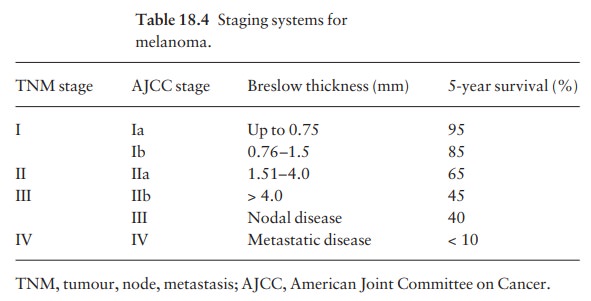 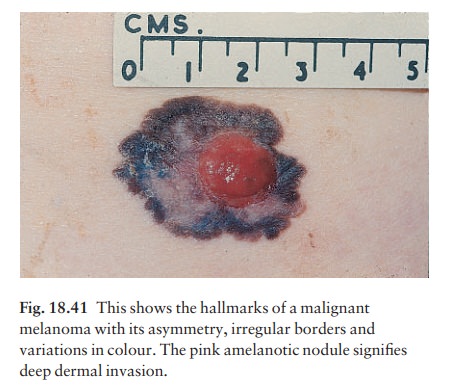 3 Acral lentiginous melanomaoccurs on the palmsand soles and, although rare in Caucasoids, is the most common type in Chinese and Japanese people. The invasive phase is again signalled by a nodule coming up within an irregularly pigmented macule or patch.

4 Nodular melanoma(Fig. 18.42) appears as a pig-mented nodule with no preceding in situ phase. It is the most rapidly growing and aggressive type. 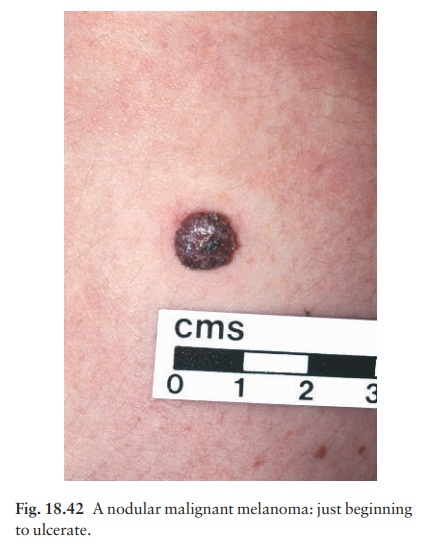 Melanomas can also described by their colour, site and degree of spread.

•   Totally amelanotic melanomas (Fig. 18.43) are rareand occur especially on the soles of the feet. Flecks of pigment can usually be seen with a lens. 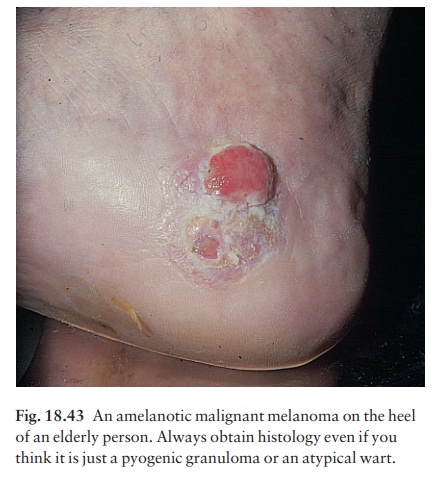 Subungual melanomas are painless areas of pig-mentation expanding under the nail and onto the nail fold.

•   Metastatic melanoma has spread to surroundingskin, regional lymph nodes or to other organs. At this stage it can rarely be cured.

Joint Committee on Cancer (AJCC) system in the USA (Table 18.4). They provide a useful guide to prognosis (see also Table 18.5). 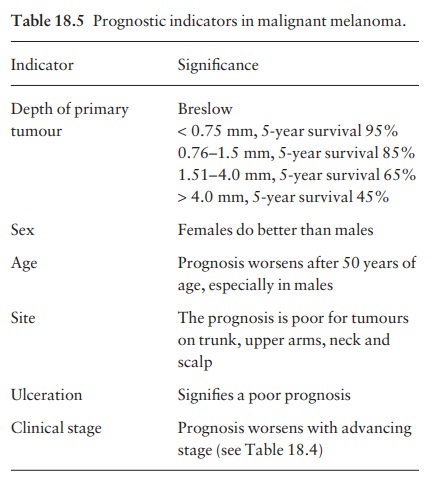 •   Lentigo maligna. Numerous atypical melanocytes,many in groups, are seen along the basal layer extend-ing downwards in the walls of hair follicles.

Superficial spreading melanoma. The dermal nodulemay be composed of epithelioid cells, spindle cells or naevus-like cells. In situ changes are seen in the adjac-ent epidermis.

•   Acral lentiginous melanoma in situ. Atypicalmelanocytes are seen in the base of the epidermis and permeating the mid epidermis.

•   Nodular melanoma. The tumour comprises epithe-lioid, spindle and naevoid cells and there is no in situ melanoma in the adjacent epidermis.

The histology (Fig. 18.44) can be used to assess prog-nosis. Breslow’s method is to measure, with an ocular micrometer, the vertical distance from the granular cell layer to the deepest part of the tumour. Clark’s method is to assess the depth of penetration of the melanoma (Fig. 18.45) in relation to the different layers of the dermis. The thicker and more penetrat-ing a lesion, the worse is its prognosis . 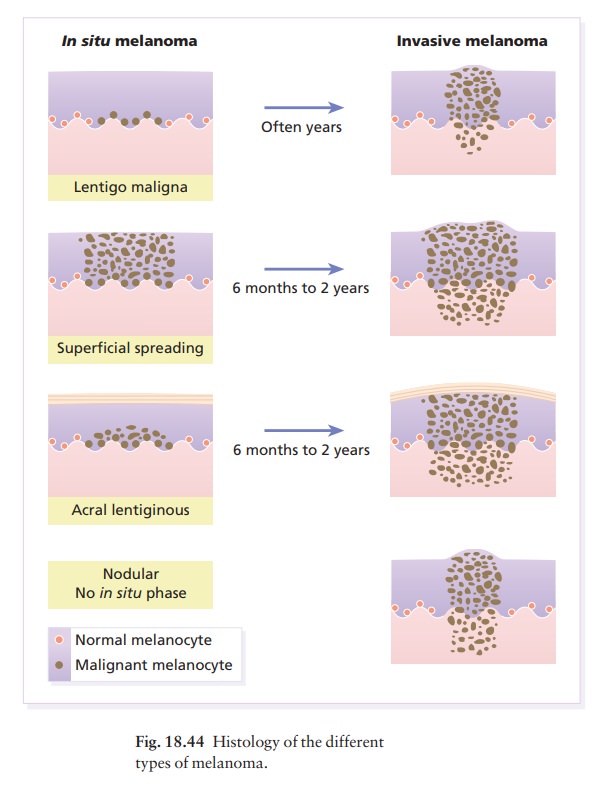 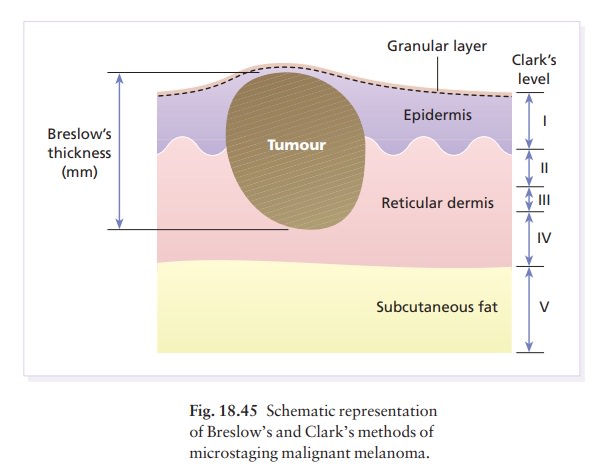 This includes a melanocytic naevus, seborrhoeic ker-atosis, pigmented actinic keratosis, pigmented basal cell carcinoma and sclerosing haemangioma;. A malignant melanoma can also be confused with a subungual or peri-ungual haematoma (see Fig. 13.21). A history of trauma helps here, as may paring. ‘Talon noir’ (Fig. 18.46) is a pigmented petechial area on the heel following minor trauma from ill-fitting training shoes. An amelanotic melanoma is most often confused with a pyogenic granuloma and with a squamous cell carcinoma. 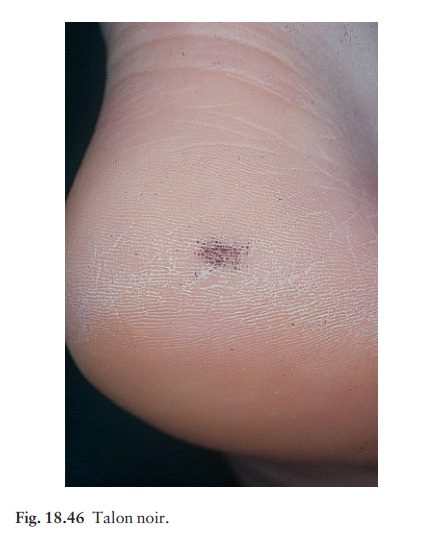 The prognostic indicators, and their significance, are listed in Table 18.5. They have been established by following up large numbers of patients who have undergone appropriate surgical treatment .

Surgery. Surgical excision, with minimal delay, isrequired. An excision biopsy, with a 2-mm margin of clearance laterally, and down to the subcutaneous fat, is recommended for all suspicious lesions. If the histology confirms the diagnosis of malignant melanoma then wider excision, including the wound of the excision biopsy, should be performed as soon as possible. 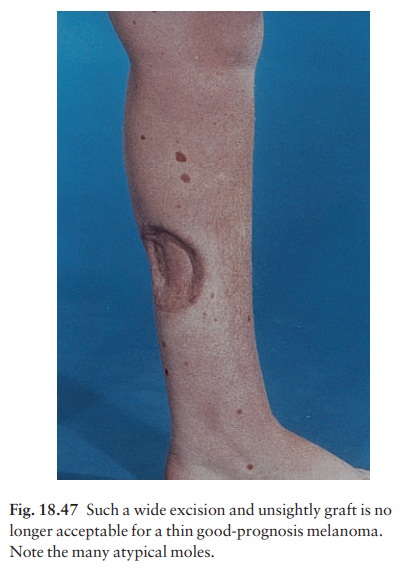 There is no convincing evidence that excision margins wider than 3 cm confer any greater survival advantage. Tissue is removed down to, but not including, the deep fascia.

Elective regional node dissection may benefit patients with tumours of intermediate thickness (1.5–4.0 mm). The role of sentinel node biopsy in detecting occult metastases is currently being investigated in patients with melanomas greater than 1 mm thick, with the aim of carrying out elective dissection of the local nodes in positive cases, avoiding this significant pro-cedure when the sentinel node is not involved. The sentinel node, the first and often nearest local node in the lymphatic drainage of the tumour, is detected by a blue dye and a radiolabelled colloid injected intrader-mally around the tumour before excision. The detec-tion of a positive sentinel node does correlate with prognosis but, as yet, it remains to be shown that patients benefit from subsequent wide dissection of the nodes in the local basin or other adjuvant treat-ment (e.g. α-interferon) after a positive sentinel node is found.

Immunological treatments. Surgery cures most patientswith early melanoma, but its effect on survival lessens as the disease advances. Many ongoing trials are investigating the role of immunotherapy (e.g. with melanoma-specific antigens) as an adjunct to surgery in patients with poor prognostic (e.g. TNM stages II and III) melanomas. Low dose α-interferon appears to improve the disease-free survival time and high-dose regimens may improve overall survival rates. The results of randomized control studies of adjunct-ive treatment with various melanoma vaccines are awaited with interest.

Chemotherapy. Although rarely curative, chemother-apy may be palliative in 25% of patients with stage III melanoma.