Propranolol is the prototypicalβ-blocking drug. As noted before,it has low and dose-dependent bioavailability. 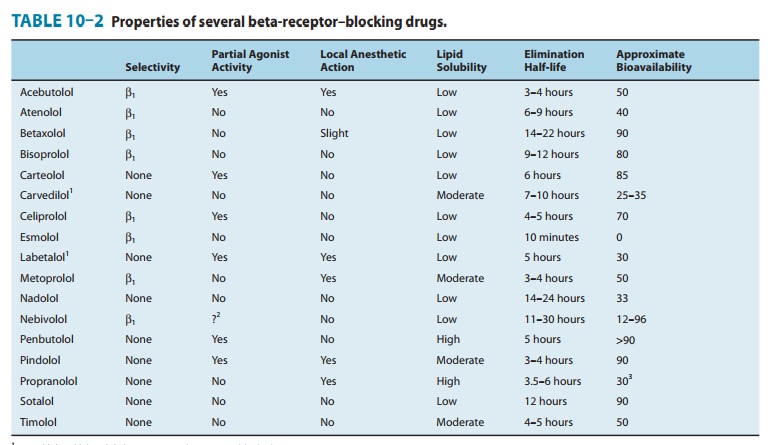 Propranolol is the prototypicalβ-blocking drug. As noted before,it has low and dose-dependent bioavailability. A long-acting form of propranolol is available; prolonged absorption of the drug may occur over a 24-hour period. The drug has negligible effects at α and muscarinic receptors; however, it may block some serotonin receptors in the brain, though the clinical significance is unclear. It has no detectable partial agonist action at β receptors.

Metoprolol, atenolol, and several other drugs (Table 10–2) aremembers of the β1-selective group. These agents may be safer in patients who experience bronchoconstriction in response to pro-pranolol. Since their β1 selectivity is rather modest, they should be used with great caution, if at all, in patients with a history of asthma. However, in selected patients with COPD the benefits may exceed the risks, eg, in patients with myocardial infarction. Beta1-selective antagonists may be preferable in patients with dia-betes or peripheral vascular disease when therapy with a β blocker is required, since β2 receptors are probably important in liver (recovery from hypoglycemia) and blood vessels (vasodilation).

Nebivolol is the most highly selectiveβ1-adrenergic receptorblocker, though some of its metabolites do not have this level of specificity. Nebivolol has the additional quality of eliciting vasodi-lation. This is due to an action of the drug on endothelial nitricoxide production. Nebivolol may increase insulin sensitivity and does not adversely affect lipid profile.

Nadolol is noteworthy for its very long duration of action; itsspectrum of action is similar to that of timolol. Timolol is a non-selective agent with no local anesthetic activity. It has excellent ocular hypotensive effects when administered topically in the eye. Levobunolol (nonselective) and betaxolol (β1-selective) are alsoused for topical ophthalmic application in glaucoma; the latter drug may be less likely to induce bronchoconstriction than non-selective antagonists. Carteolol is a nonselective β-receptor antagonist.

Pindolol, acebutolol, carteolol, bopindolol,* oxprenolol,* celiprolol,*and penbutolol are of interest because they have par-tial β-agonist activity. They are effective in the major cardiovascu-lar applications of the β-blocking group (hypertension and angina). Although these partial agonists may be less likely to cause bradycardia and abnormalities in plasma lipids than are antago-nists, the overall clinical significance of intrinsic sympathomimetic activity remains uncertain. Pindolol, perhaps as a result of actions on serotonin signaling, may potentiate the action of traditional antidepressant medications. Celiprolol is a β1-selective antagonist with a modest capacity to activate β2 receptors.

There is limited evidence suggesting that celiprolol may have less adverse bronchoconstrictor effect in asthma and may even promote bronchodilation. Acebutolol is also a β1-selective antagonist.

Labetalol is a reversible adrenoceptor antagonist available as aracemic mixture of two pairs of chiral isomers (the molecule has two centers of asymmetry). The (S,S)- and (R,S)-isomers are nearly inactive, the (S,R)-isomer is a potent α blocker, and the (R,R)-isomer is a potent β blocker. Labetalol’s affinity for α receptors is less than that of phentolamine, but labetalol is α1-selective. Its β-blocking potency is somewhat lower than that of propranolol.Hypotension induced by labetalol is accompanied by less tachy-cardia than occurs with phentolamine and similar α blockers.

Carvedilol, medroxalol,*and bucindolol*are nonselectiveβ-receptor antagonists with some capacity to block α1-adrenergicreceptors. Carvedilol antagonizes the actions of catecholamines more potently at β receptors than at α1 receptors. The drug has a half-life of 6–8 hours. It is extensively metabolized in the liver, and stereoselective metabolism of its two isomers is observed. Since metabolism of (R)-carvedilol is influenced by polymorphisms in CYP2D6 activity and by drugs that inhibit this enzyme’s activity (such as quinidine and fluoxetine,), drug interac-tions may occur. Carvedilol also appears to attenuate oxygen free radical–initiated lipid peroxidation and to inhibit vascular smooth muscle mitogenesis independently of adrenoceptor blockade. These effects may contribute to the clinical benefits of the drug in chronic heart failure .

Esmolol is an ultra-short–actingβ1-selective adrenoceptorantagonist. The structure of esmolol contains an ester linkage; esterases in red blood cells rapidly metabolize esmolol to a metab-olite that has a low affinity for β receptors. Consequently, esmolol has a short half-life (about 10 minutes). Therefore, during con-tinuous infusions of esmolol, steady-state concentrations are achieved quickly, and the therapeutic actions of the drug are ter-minated rapidly when its infusion is discontinued. Esmolol may be safer to use than longer-acting antagonists in critically ill patients who require a β-adrenoceptor antagonist. Esmolol is use-ful in controlling supraventricular arrhythmias, arrhythmias asso-ciated with thyrotoxicosis, perioperative hypertension, and myocardial ischemia in acutely ill patients.

Butoxamine is a research drug selective forβ2receptors.Selective β2-blocking drugs have not been actively sought because there is no obvious clinical application for them; none is available for clinical use.