Southern transfers are a versatile technique of molecular genetics that combines electrophoresis and DNA-DNA or RNA-DNA hybridization.

Southern transfers are a versatile technique of molecular genetics that combines electrophoresis and DNA-DNA or RNA-DNA hybridization (Fig. 2.15). 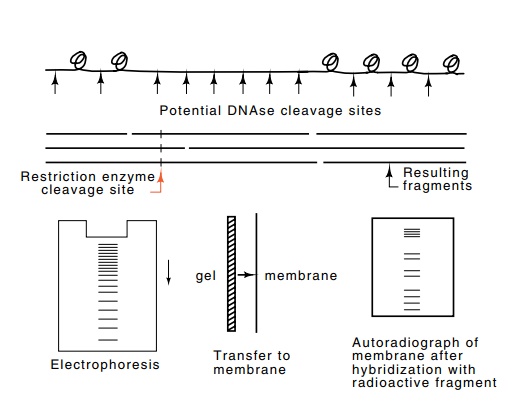 Figure 2.15 Use of Southern transfer technology to determine the locations ofnuclease hypersensitive and hyposensitive sites in the vicinity of a gene. Gently extracted DNA is lightly digested with DNAse, cleaved with a restriction enzyme at specific sites, denatured, separated by electrophoresis, transferred to a membrane, and then hybridized to a short radioactive oligonucleotide that hybridizes near the gene in question. Finally, an autoradiograph is made of the membrane.

The application of Southern transfers to various questions will be mentioned a number of this throughout the book. The power of the transfer and hybridization technology as applied to examining nucleosome positioning is that it permits determination of the suscep-tibility to DNAse cleavage in the region of whatever gene we are interested in. This can be done in the presence of DNA from thousands of other genes. Here we shall consider the application of this technology to the problems of ascertaining whether nucleosomes near a specific gene occupy fixed positions and whether nucleosomes cover regulatory sequences just ahead of genes. The approach has shown that in front of many genes are areas apparently not occupied by nucleosomes. This leaves these regions hypersensitive to hydrolysis by nucleases added to gently lysed nuclei. The nuclease sensitivity within the genes is much less due to the presence of nucleosomes. Often such nucleosomes tend to occupy specific positions.

The DNA for nucleosome position measurements is gently extracted from nuclei and lightly treated with a nuclease like DNAse I to generate about one nick per one thousand base pairs. Different molecules will be nicked in different places, but very few molecules will be nicked in areas covered by nucleosomes. After the digestion, protein is removed by extraction with phenol and all the DNA molecules are digested by anenzyme that cleaves DNA at specific sequences. These enzymes are known as restriction enzymes and will be discussed more fully later.

Suppose that such a cleavage site lies several hundred base pairs in front of the gene we are considering. After the cleavage steps, the DNA fragments are denatured and the single-stranded fragments are sepa-rated according to size by electrophoresis. After the electrophoresis, the fragments are transferred to a sheet of nylon membrane. The transfer to the membrane preserves the pattern of size-separated fragments. The membrane can then be incubated in a solution containing radioactive oligonucleotide possessing a sequence complementary to sequence from the gene of interest near to the cleavage site. The oligonucleotide will hybridize to just those DNA fragments possessing this complemen-tary sequence. Hence the membrane will be radioactive in the areas containing the fragments. In any area of the DNA that was protected from DNAse I nicking by the presence of a nucleosome, no cleavages will occur. Hence, there will be no fragments of the size extending from the position of the restriction enzyme cleavage site to the area occupied by the nucleosome. Conversely, in areas readily cleaved by the nuclease, many different molecules will be cleaved, and therefore many DNA fragments will exist of a length equal to the distance from the restriction cleavage site to the nuclease-sensitive, nucleosome free, region.

Nucleosome protection experiments show that several hundred nu-cleotides in regions ahead of genes in which regulatory proteins are expected to bind frequently are devoid of nucleosomes. Two factors are responsible. First, regulatory proteins can bind to these regions and prevent nucleosomes from binding there. Another reason is natural bending of the DNA. As discussed earlier, DNA is not straight, and most DNA possesses minor bends. Such bends greatly facilitate the wrapping of DNA around the histones in the formation of a nucleosome. Thus, bends in the DNA can position a nucleosome, and this in turn partially positions its neighbors, generating a region of phased nucleosomes. Such phasing can leave gaps where they are necessary for the binding of regulatory proteins.