`Cells have enzymes that alter the linking numbers of covalently closed DNA molecules. Wang, who found the first such protein, called it omega, but now it is often called DNA topoisomerase I.

`Cells have enzymes that alter the linking numbers of covalently closed DNA molecules. Wang, who found the first such protein, called it omega, but now it is often called DNA topoisomerase I. Astoundingly, this enzyme removes negative superhelical turns, one at a time, without hydrolyzing ATP or any other energy-rich small molecule. It can act on positively supercoiled DNA, but only if a special trick is used to generate a single-stranded stretch for the enzyme to bind to. No nicks are left in 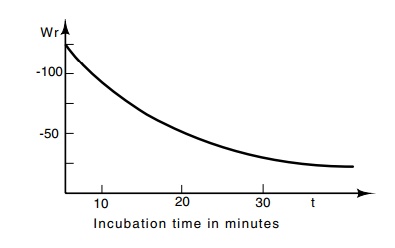 Figure 2.13 Reduction in the number of negative superhelical turns containedin lambda phage DNA as a function of the time of incubation with DNA topoisomerase I.

the DNA after omega has acted. Purified, covalently closed lambda phage DNA extracted from lambda-infected cells is found to possess about 120 negative superhelical turns. Incubation of omega with this DNA increases the linking number until only about 20 negative super-helical turns remain (Fig. 2.13). The enzyme appears to remove twists, and hence superhelical turns, in a controlled way. It binds to the DNA and then interrupts the phosphodiester backbone of one strand by a phosphotransfer reaction that makes a high-energy phosphate bond to the enzyme. In this state the enzyme removes one twist and then re-forms the phosphodiester bond in the DNA.

Additional enzymes capable of altering the linking number of DNA have also been discovered. The topoisomerase from eukaryotic cells can apparently bind double-stranded DNA and will remove positive super-helical turns as well as negative. Cells possess another remarkable enzyme. This enzyme, DNA gyrase or DNA topoisomerase II, adds negative superhelical turns; as expected, energy from the hydrolysis of ATP is required for this reaction.

Studies of the activity of topoisomerases I and II, omega and gyrase, have shown that these enzymes can best be thought of as functioning by strand passage mechanisms. Where two DNA duplexes cross, gyrase, with the consumption of an ATP molecule, can permit the duplex lying below to be cut, to pass the first, and to be rejoined. Topoisomerase I

can proceed by the same sort of pathway, but it passes one strand of a duplex through the other strand, having first denatured a region where

Figure 2.14 The strand inversion pathway as applied by DNA topoisomeraseI in which a region of DNA is melted and one strand is broken, passed by the other, and rejoined.

strand crossing is to occur (Fig. 2.14). These are known as sign-inversion pathways because they change the sign of the linking number that is contributed by a point of crossing of the two DNA strands.

The sign-inversion pathway has a particularly useful property: it permits DNA duplexes to interpenetrate one another. Gyrase is an enzyme that can untangle knots in DNA! Undoubtedly this property is of great value to the cell as the DNA is compressed into such a small volume that tangles seem inevitable. In general, enzymes that cut and rejoin DNA are topoisomerases.