Grooves in DNA and Helical Forms of DNA

Grooves in DNA and Helical Forms of DNA

Watson and Crick deduced the basic structure of DNA by using three pieces of information: X-ray diffraction data, the structures of the bases, and Chargaff’s findings that, in most DNA samples, the mole fraction of guanine equals that of cytosine, as well as the mole fraction of adenine equals that of thymine. The Watson-Crick structure is a pair of oppositely oriented, antiparallel, DNA strands that wind around one another in a right-handed helix. That is, the strands wrap clockwise moving down the axis away from an observer. Base pairs A-T and G-C lie on the interior of the helix and the phosphate groups on the outside.

More recent diffraction studies of crystals of short oligonucleotides of specific sequence have revealed substantial base to base variation in the twist from one base to the next. Therefore, it is not at all clear whether it is meaningful to speak of the various forms of the DNA. Nonetheless, on average, natural DNA, that is DNA with all four bases represented in random sequence over short distances, has a conforma-tion most closely represented by B-form DNA.

The A, B, and C forms of DNA are all helical. That is, as the units of phosphate-deoxyribose-base:base-deoxyribose-phosphate along the DNA are stacked, each succeeding base pair unit is rotated with respect to the preceding unit. The path of the phosphates along the periphery of the resulting structure is helical and defines the surface of a circular 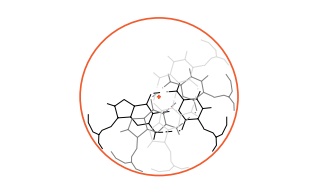 cylinder just enclosing the DNA. The base pair unit is not circular, however, and from two directions it does not extend all the way to the enclosing cylinder. Thus a base pair possesses two indentations. Be-cause the next base pair along the DNA helix is rotated with respect to the preceding base, its indentations are also rotated. Thus, moving along the DNA from base to base, the indentations wind around the cylinder and form grooves. 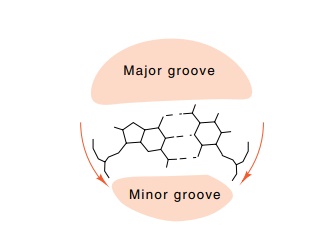 Fig. 2.3 shows a helix generated from a rectangle approximating the base pair unit of B DNA. Note that the rectangle is offset from the helix axis. As a result of this offset, the two grooves generated in the helix are of different depths and slightly different widths. The actual widths of the two grooves can be seen more clearly from the side view of the three dimensional helix in which the viewpoint is placed so that you are looking directly along the upper pair of grooves.

Figure 2.3 Generation of a helix by the stacking of rectangles. Each rectangleis rotated 34° clockwise with respect to the one below. Left, the viewpoint and the generating rectangle; right, a view along the major and minor grooves showing their depths and shapes. 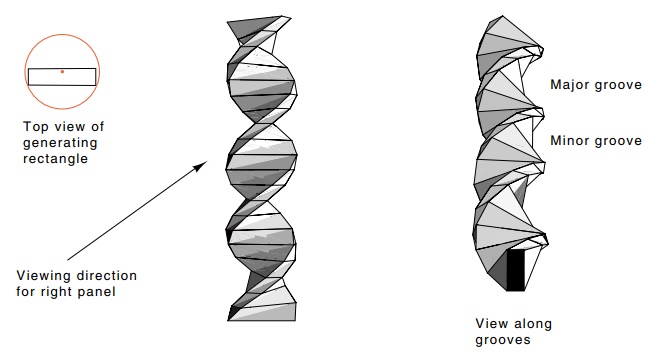 In actual DNA, the deoxyribose-phosphate units are not aligned parallel to the base pairs as they were represented in the rectangle approximation above. The units are both oriented toward one of the grooves. This narrows one of the grooves on the helical DNA molecule and widens the other. The two grooves are therefore called the minor and major grooves of the DNA. Thus, the displacement of the base pair from the helix axis primarily affects the relative depth of the two grooves, and the twisted position of the phosphates relative to the bases primarily affects the widths of the grooves.

The A-form of DNA is particularly interesting because the base pairs are displaced so far from the helix axis that the major groove becomes very deep and narrow and the minor groove is barely an indentation. Helical RNA most often assumes conformations close to the A-form. Additional factors such as twist and tilt of the base pairs which are

present in the A and C-forms of DNA, but largely absent in the B-form, have lesser effects on the width and depth of the grooves. Unexpectedly, even a left-helical form can form under special conditions, but thus far this Z-form DNA has not been found to play any significant biological role.

Helical structures can also form from a single strand of RNA or DNA if it folds back upon itself. The two most common structures are hairpins and pseudoknots. In a pseudoknot, bases in the loop form additional base pairs with nucleotides beyond the hairpin region.