Can the sequence of the DNA be recognized without destroying its double helical structure? Since thousands of regulatory proteins must bind to their cognate regulatory sequences near the genes they regulate.

Can the sequence of the DNA be recognized without destroying its double helical structure? Since thousands of regulatory proteins must bind to their cognate regulatory sequences near the genes they regulate, it is crucial that these proteins be able to recognize their binding sequences without requiring that the DNA strands be separated.

Sequence-dependent effects can be seen in the slight structural dif-ferences found in crystallized oligonucleotides. It is possible that pro-teins could utilize these structural differences and ignore the chemical differences between the bases. For example, a protein might recognize its correct binding site strictly by the locations of phosphates in space. The regulator of the trp operon in Escherichia coli appears to recognize its binding site utilizing such principles because it appears to make almost no base-specific hydrogen bonds.

The second possibility for recognition of sequences is to read the chemical structures of the bases. Hydrogen bonds can be made to donors and acceptors in both the major and minor grooves as shown in 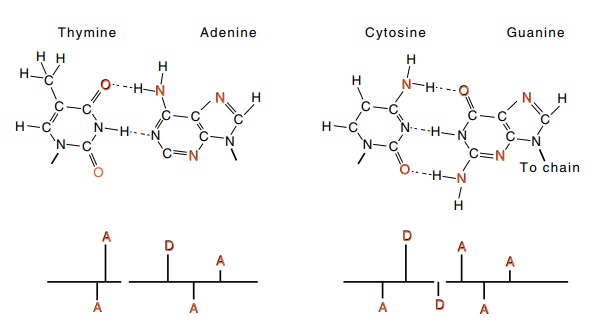 Figure 2.5 Above, T-A and C-G base pairs. Below, schematic representation ofthe bases in which the locations of the hydrogen bond donors (D), and acceptors (A), in the major groove are shown above the line and those in the minor groove are shown below the line.

the schematic (Fig. 2.5). Considering the typical flexibility in proteins, it becomes apparent that distinguishing the four base pairs solely by the presence or absence of hydrogen bonding capabilities of the four bases requires a minimum of two hydrogen bonds per base pair in the major groove. A-T and T-A base pairs cannot be distinguished in the minor groove. In nature we can expect some proteins to recognize sequence by structure determination, some proteins to recognize sequence by hydrogen bonding to the portions of the bases exposed in the major groove, some to utilize additional interactions to the methyl group of thymine, and many to utilize a combination of all these methods.