A relatively small number of pathogens are able to enter the body in the lymphatic or circulatory systems and produce a generalized or systemic infection involving numerous body organs: brain, bone marrow, kidneys, liver, lungs and spleen.

A relatively small number of pathogens are able to enter the body in the lymphatic or circulatory systems and produce a generalized or systemic infection involving numerous body organs: brain, bone marrow, kidneys, liver, lungs and spleen. Local skin infections, such as with Streptococcus pyogenes or Staphylococcus aureus or infections of the GIT or urogenital system with Enterobacteriaceae can unfortunately progress to acute generalized infections within only a few days, given appropriate conditions. For example, Streptococcuspyogenes or Staphylococcus aureus secrete toxins calledsuperantigens that stimulate the release of cytokines from immune cells and produce an excessive inflammatory response called systemic inflammatoryresponse syndrome (SIRS) consisting of four characteristic stages. In stage I,respiration, heart rate and body temperature all increase. The leukocyte count may be increased or decreased. Stage II refers to the presence of the organism in the blood of the patient; this is called sepsis. Normally less than 50% of cases can be identified. Stage II may be cured intrinsically by the immune system or extrinsically by the administration of antibiotics. If unsuccessful, the condition progresses to stage III: serious sepsis or multiorgan dysfunction syndrome (MODS) characterized by lactic acidosis, falling blood pressure, hypoxia and oliguria. If clinical measures fail to stabilize the patient, then stage IV, septic shock, develops with irreversible organ failure and the death of the patient in most cases.

In contrast to the possible acute developments of localized infections, generalized infections may have incubation times of up to three weeks. A classical example of such a systemic infection is typhoid fever caused by Salmonella typhi (Figure 3.22). The pathogen may be ingested and can enterthe body through the tonsils in the throat and Peyer’s patches in the gut. The bacterium is distributed to various organs in the lymph and blood, infects 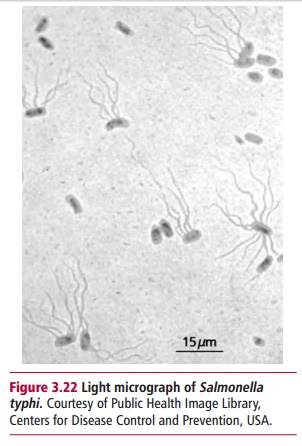 cells and grows intracellularly. The major symptoms are fevers of up to 40oC and the development of abscesses in the intestine that may cause perforations and a fatal peritonitis. Even when the patient recovers, a relapse may occur. Salmonella typhi infects about 60 million patients annually, mainly in thedeveloping world. If untreated, it can be fatal. Some recovered patients retain the pathogen in the gall bladder and excrete bacteria in their feces, becoming carriers, although remaining healthy themselves. 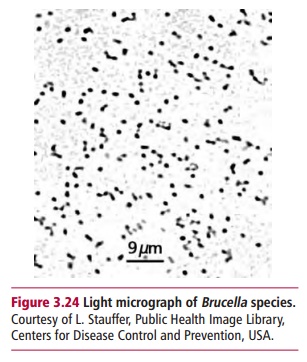 The zoonosis, brucellosis, caused by various species of Brucella (Figure 3.24), is also a primary systemic infection. This is a common infection of cattle (Brucellaabortus), sheep and goats (Brucella melitensis) and can infect humans if theydrink contaminated milk, if they inhale the bacteria into the lungs or if there is direct contact through skin lesions. People who work in direct contact with animals, such as farmers, veterinarians, shepherds, goatherds and abattoir workers, are most at risk. The pathogen colonizes and grows in the main abdominal organs and bone marrow producing periodic attacks of relapsing fever over an extended period.