Infections of the Eyes, Ears and Central Nervous System

INFECTIONS OF THE EYES, EARS AND CENTRAL NERVOUS SYSTEM

Eyelid infections generally involve the lid margins, eyelid glands or follicles causing styes or hordeolums. They are usually associated with Staphylococcus aureus infections. The conjunctiva is particularly susceptible to infection.The epithelial surface enclosed by the eyelids is a warm moist enclosed environment in which microorganisms can rapidly become established. However, microorganisms must avoid being rinsed away by tears and some pathogens, such as Chlamydia trachomatis (Figure 3.3), attach specifically to conjunctival cells. An estimated 500 million people are infected with different serotypes of Chlamydia trachomatis, making trachoma the most significant eye infection worldwide. The disease blinds approximately 1% of infected individuals while many others suffer visual impairment. Chlamydia trachomatis is transmitted by contact with contaminated flies,fingers and towels although trachoma itself results from chronic repeated infections. This is much more likely to occur in regions where restricted access to water prevents regular washing of the hands and face. Chlamydia is also a sexually transmitted disease and there is evidence that untreated chlamydial infections can lead to premature delivery and babies born to infected mothers can be infected in their eyes and respiratory tracts. Chlamydia is a leading cause of early infant pneumonia and conjunctivitis (pink eye) in the newborn. 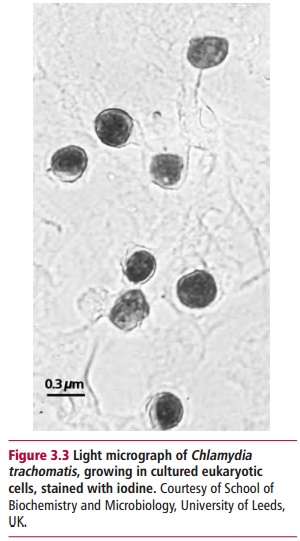 A laboratory diagnosis of trachoma can be carried out using samples of conjunctival fluid or scrapings. The usual treatment is with oral or topical antibiotics, such as tetracycline or doxycycline Chlamydia infections account for only a fifth of cases of conjunctivitis; others are caused by bacteria such as Streptococcus pneumoniae and Leptospira spp.

Serious infections of the inner eye with Pseudomonas aeruginosa may follow trauma or after invasion by the protozoan Toxoplasma gondii causing chorioretinitis and possible blindness. This widespread protozoan is not a serious threat unless acquired in utero or when an individual is immunosuppressed, perhaps as a result of taking drugs to prevent transplant rejection . Infection occurs by swallowing oocysts released by infected cats or by eating meat containing tissue cysts.

The eyes may also be infected by parasitic worms, for example, larval forms of the tapeworm Echinococcus granulosus that is transmitted by eggs passed from infected dogs. Infection by the larvae of the nematode Toxocara canis, which occurs naturally in the intestine of dogs, is, however, more common. An infection can lead to the detachment of the retina. River blindness in Africa and Central America is caused by the helminth Onchocerca volvulus. Simulium flies carrying larvae obtained from the skin of infected hosts transmit the infection. These flies develop in rivers, hence the name of the disease. River blindness is a serious infection with over 300 000 people infected worldwide. The rates of blindness, which is irreversible, may reach 40%. The usual treatment is with anthelminthic drugs.

Infections of the outer ear may cause pain or irritation and are resistant to some antibiotics. The middle ear can be colonized by viruses and bacteria from the upper respiratory tract causing acute otitis media with swelling and blockage of the Eustachian tube and may lead to deafness, though this is generally temporary. Microorganisms that cause middle ear infections include the virus that causes mumps. This may be followed by secondary infections with Streptococcus pneumoniae and Haemophilus influenzae. This is very common in children. Indeed, otitis media is the most frequent illness diagnosed in young children. The general symptoms, apart from a devastating earache, are fever, vomiting and diarrhea. The vesicles of the tympanum become dilated, with bulging of the drum itself occurring in the later stages of infection. If treatment is inadequate, then acute attacks may eventually perforate the eardrum, produce chronic discharges and defective hearing. The usual treatment is with oral antibiotics, such as ampicillin, amoxycillin, erythromycin and cefixime. 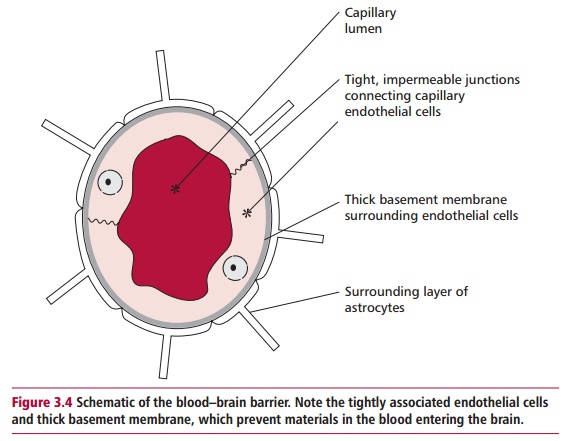 Infections of the central nervous system (CNS) may affect the meninges, the spinal cord or the brain causing meningitis, myelitis and encephalitis respectively. More than one area may be infected simultaneously. Such infections can also become systemic infections. Pathogens can enter these areas following head injuries, along the axons of neurons or by breaching the blood–brain or blood–cerebrospinal fluid barriers (Figure3.4). The most common causes of viral meningitis are enteroviruses, suchas ECHO-, Coxsackie- and, formerly, poliomyelitis viruses (Figure 3.5). Viral meningitis is not usually a life-threatening condition. Bacterial meningitis, in contrast, has a mortality greater than 10%. The principal causative organisms are the capsulated bacteria, Neisseria meningitidis , Streptococcus pneumoniae and, before the introduction of a vaccine, Haemophilus influenzae . Effective vaccines are alsoavailable against some serogroups of Neisseria meningitidis and a vaccine against Streptococcus pneumoniae is being tested. 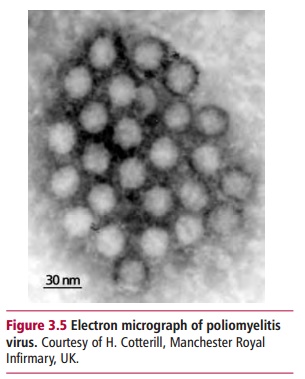 Encephalomyelitis results from infections by a number of viruses or protozoa. These include some poliovirus types, Herpes simplex, measles virus, HIV, toga viruses, which are transmitted by arthropods, and the rabies virus that is transmitted from infected mammals. The protozoan Toxoplasma gondii may infect individuals with compromized immune systems while Trypanosomabrucei is the causative organism of African sleeping sickness.