There is a wealth of LP applications to production and inventory control, ranging from simple allocation of machining capacity to meet demand to the more complex case of using inventory to "dampen" the effect of erratic change in demand over a given planning horizon and of using hiring and firing to respond to changes in workforce needs.

This section presents realistic LP models in which the definition of the variables and the construction of the objective function and constraints are not as straight-forward as in the case of the two-variable model. The areas covered by these appli-cations include the following:

Each model is fully developed and its optimum solution is analyzed and interpreted.

There is a wealth of LP applications to production and inventory control, ranging from simple allocation of machining capacity to meet demand to the more complex case of using inventory to "dampen" the effect of erratic change in demand over a given planning horizon and of using hiring and firing to respond to changes in workforce needs. This section presents three examples. 'The first deals with the scheduling of products using common production facilities to meet demand during a single period, the second deals with the use of inventory in a multiperiod production system to fill future demand, and the third deals with the use of a combined inventory and worker hiring/firing to "smooth" production over a multiperiod planning horizon with fluctuating demand.

In preparation for the winter season, a clothing company is manufacturing parka and goose overcoats, insulated pants, and gloves. All products are manufactured in four different departments: cutting, insulating, sewing, and packaging. The company has received firm orders for its products. The contract stipulates a penalty for undelivered items. The following table provides the pertinent data of the situation.

Devise an optimal production plan for the company.

Mathematical Model:   The definition of the variables is straightforward. Let

x3  = number of pairs of pants

x4 = number of pairs of gloves

The company is penalized for not meeting demand. This means that the objective of the problem is to maximize the net receipts, defined as

The total profit is readily expressed as 30x1 + 40x2 + 20x3 + 10x4  The total penalty is a function of the shortage quantities (= demand - units supplied of each product). These quantities can be determined from the following demand limits:

A demand is not fulfilled if its constraint is satisfied as a strict inequality. For example, if 650 parka jackets are produced, then x1 = 650, which leads to a shortage of 800 - 650 = 150 parka jackets. We can express the shortage of any product algebraically by defining a new nonnegative variable-namely,

In this case, the demand constraints can be written as

To complete the model, the remaining constraints deal with the production capacity restric-tions; namely

Acme Manufacturing Company has contracted to deliver horne windows over the next 6 months. The demands for each month are 100,250,190,140,220, and 110 units, respectively. Production cost per window varies from month to month depending on the cost of labor, material, and utilities. Acme estimates the production cost per window over the next 6 months to be $50, $45, $55, $48, $52, and $50, respectively. To take advantage of the fluctuations in manufacturing cost, Acme may elect to produce more than is needed in a given month and hold the excess units for delivery in later months. This, however, will incur storage costs at the rate of $8 per window per month assessed on end-of-month inventory. Develop a linear program to determine the optimum production schedule.

Mathematical Model: The variables of the problem include the monthly production amount and the end-of-month inventory. For i = 1,2, ... , 6, let

xi= Number of units produced in month i

1i = Inventory units left at the end of month i

The relationship between these variables and the monthly demand over the six-month horizon is represented by the schematic diagram in Figure 2.5. The system starts empty, which means that

The objective function seeks to minimize the sum of the production and end-of-month in-ventory costs. Here we have,

Thus the objective function is

Schematic representation of the production-inventory system

The constraints of the problem can be determined directly from the representation in Figure 2.5. For each period we have the following balance equation:

This is translated mathematically for the individual months as 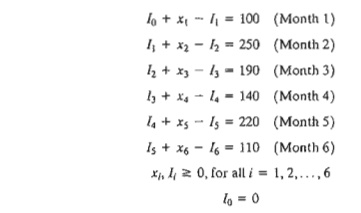 For the problem, 10 = 0 because the situation starts with no initial inventory. Also, in any optimal solution, the ending inventory h will be zero, because it is not logical to end the horizon with positive inventory, which can only incur additional inventory cost without serving any purpose.

The complete model is now given as 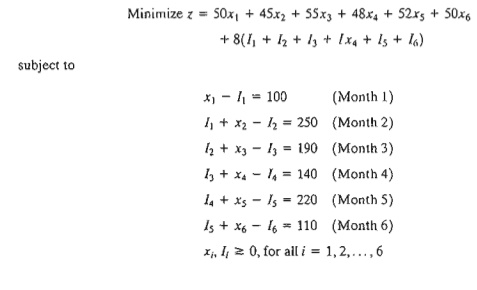 Optimum solution of the production.inventory problem

The optimum solution is summarized in Figure 2.6. It shows that each month's demand is satis-fied directly from the month's production, except for month 2 whose production quantity of 440 units covers the demand for both months 2 and 3. The total associated cost is z = $49,980.

A company will manufacture a product for the next four months: March, April, May, and June. The demands for each month are 520, 720, 520, and 620 units, respectively. The company has a steady workforce of 10 employees but can meet fluctuating production needs by hiring and fir-ing temporary workers, if necessary. The extra costs of hiring and firing in any month are $200 and $400 per worker, respectively. A permanent worker can produce 12 units per month, and a temporary worker, lacking comparable experience, only produce 10 units per month. TIle com-pany can produce more than needed in any month and carry the surplus over to a succeeding month at a holding cost of $50 per unit per month. Develop an optimal hiring/firing policy for the company over the four-month planning horizon.

Mathematical Model: This model is similar to that of Example 2.3-5 in the general sense that each month has its production, demand, and ending inventory. There are two exceptions: (1) ac-counting for the permanent versus the temporary workforce, and (2) accounting for the cost of hiring and firing in each month.

Because the permanent 10 workers cannot be fired, their impact can be accounted for by subtracting the units they produce from the respective monthly demand. The remaining demand, if any, is satisfied through hiring and firing of temps. From the standpoint of the model, the net demand for each month is

Ii =    Units of ending inventory for month i

The variables xi and Ii, by definition, must assume nonnegative values. On the other hand, the variable Si can be positive when new temps are hired, negative when workers are fired, and zero if no hiring or firing occurs. As a result, the variable must be unrestricted in sign, This is the first instance in this chapter of using an unrestricted variable. As we will see shortly, special substitu-tion is needed to allow the implementation of hiring and firing in the model.

The objective is to minimize the sum of the cost of hiring and firing plus the cost of holding inventory from one month to the next. The treatment of the inventory cost is similar to the one given in Example 2.3-5-namely,

(Note that I4 = 0 in the optimum solution.) The cost of hiring and firing is a bit more involved. We know that in any optimum solution, at least 40 temps (= 400/10) must be hired at the start of March to meet the month's demand. However, rather than treating this situation as a special case, we can let the optimization process take care of it automatically. Thus, given that the costs of hiring and firing a temp are $200 and $400, respectively, we have

To translate this equation mathematically, we will need to develop the constraints first. 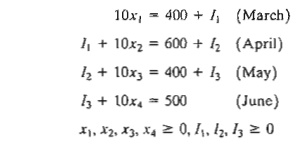 Next, we develop the constraints dealing with hiring and firing. First, note that the temp work-force starts with x1 workers at the beginning of March. At the start of April, x1 will be adjusted (up or down) by S2 to generate x2. The same idea applies to x3 and x4. These observations lead to the following equations

First we need to address an important point: What if both Si-  and Si+  are positive? The answer is that this cannot happen because it implies that the solution calls for both hiring and firing in the same month. Interestingly, the theory of linear programming (see Chapter 7) tells us that Si-  and Si+  can never be positive simultaneously, a result that confirms intuition.

We can now write the cost of hiring and firing as follows: 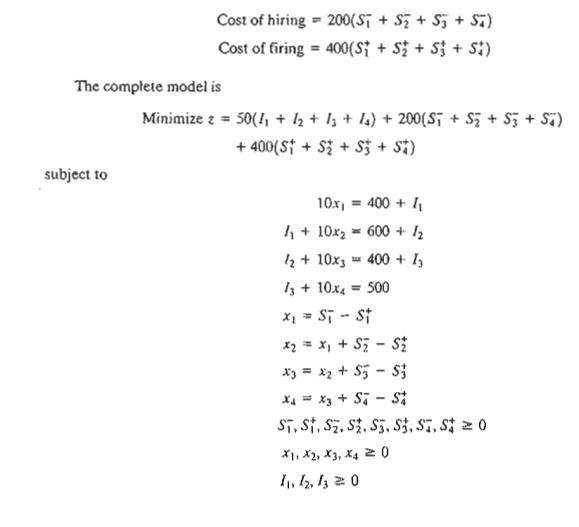 Tooleo has contracted with AutoMate to supply their automotive discount stores with wrenches and chisels. AutoMate's weekly demand consists of at least 1500 wrenches and 1200 chisels. Tooleo cannot produce all the requested units with its present one-shift capacity and must use overtime and possibly subcontract with other tool shops. The result is an increase in the production cost per unit, as shown in the following table. Market de-mand restricts the ratio of chisels to wrenches to at least 2:1.

a. Formulate the problem as a linear program, and determine the optimum production schedule for each tool.

b. Relate the fact that the production cost function has increasing unit costs to the va-lidi ty of the modeL

2. Four products are processed sequentially on three machines. The following table gives the pertinent data of the problem.

Formulate the problem as an LP model, and find the optimum solution.

*7. The manufacturing process of a product consists of two successive operations, I and II. The following table provides the pertinent data over the months of June, July, and August:

8. Two products are manufactured sequentially on two machines. The time available on each machine is 8 hours per day and may be increased by up to 4 hours of overtime, if necessary, at an additional cost of $100 per hour. The table below gives the production rate on the two machines as well as the price per unit of the two products. Determine the optimum production schedule and the recommended use of overtime, if any.