Secretions of the Small Intestine

Secretion of Mucus by Brunner’s Glands in the Duodenum, Secretion of Intestinal Digestive Juices by the Crypts of Lieberkü hn.

Secretions of the Small Intestine

Secretion of Mucus by Brunner’s Glands in the Duodenum

An extensive array of compound mucous glands, called Brunner’s glands, is located in the wall of the first few centimeters of the duodenum, mainly between the pylorus of the stomach and the papilla of Vater where pancreatic secretion and bile empty into the duodenum. These glands secrete large amounts of alkaline mucus in response to (1) tactile or irritating stimuli on the duodenal mucosa; (2) vagal stimulation, which causes increased Brunner’s glands secretion concurrently with increase in stomach secretion; and (3) gastrointestinal hormones, especially secretin. The function of the mucus secreted by Brunner’s glands is to protect the duodenal wall from digestion by the highly acid gastric juice emptying from the stomach. In addition, the mucus contains a large excess of bicarbonate ions, which add to the bicarbonate ions from pancreatic secretion and liver bile in neutralizing the hydrochloric acid entering the duodenum from the stomach.

Brunner’s glands are inhibited by sympathetic stim-ulation; therefore, such stimulation in very excitable persons is likely to leave the duodenal bulb unpro-tected and is perhaps one of the factors that cause this area of the gastrointestinal tract to be the site of peptic ulcers in about 50 per cent of ulcer patients.

Secretion of Intestinal Digestive Juices by the Crypts of Lieberkü hn

Located over the entire surface of the small intestine are small pits called crypts of Lieberkühn, one of which is illustrated in Figure 64–13. These crypts lie between the intestinal villi. The surfaces of both the crypts and the villi are covered by an epithelium composed of two types of cells: (1) a moderate number of goblet cells, which secrete mucus that lubricates and protects the intestinal surfaces, and (2) a large number of entero-cytes, which, in the crypts, secrete large quantities ofwater and electrolytes and, over the surfaces of adja-cent villi, reabsorb the water and electrolytes along with end products of digestion. 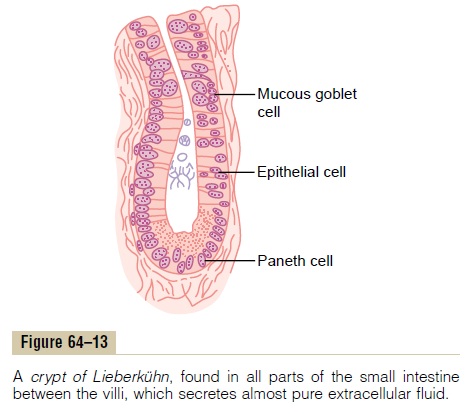 The intestinal secretions are formed by the enterocytes of the crypts at a rate of about 1800 ml/day. These secretions are almost pure extracellular fluid and have a slightly alkaline pH in the range of 7.5 to 8.0. The secretions also are rapidly reabsorbed by the villi. This flow of fluid from the crypts into the villi supplies a watery vehicle for absorption of substances from chyme when it comes in contact with the villi. Thus, the primary function of the small intestine is to absorb nutrients and their digestive products into the blood.

Digestive Enzymes in the Small Intestinal Secretion. Whensecretions of the small intestine are collected without cellular debris, they have almost no enzymes. The en-terocytes of the mucosa, especially those that cover the villi, do contain digestive enzymes that digest specific food substances while they are being absorbed through the epithelium. These enzymes are the following:(1) several peptidases for splitting small peptides into amino acids, (2) four enzymes—sucrase, maltase, iso-maltase, and lactase—for splitting disaccharides intomonosaccharides, and (3) small amounts of intestinallipase for splitting neutral fats into glycerol and fattyacids.

The epithelial cells deep in the crypts of Lieberkühn continually undergo mitosis, and new cells migrate along the basement membrane upward out of the crypts toward the tips of the villi, thus continually replacing the villus epithelium and also forming new digestive enzymes. As the villus cells age, they are finally shed into the intestinal secretions. The life cycle of an intestinal epithelial cell is about 5 days. This rapid growth of new cells also allows rapid repair of excori-ations that occur in the mucosa.

By far the most important means for regulating small intestine secretion are local enteric nervous reflexes, especially reflexes initiated by tactile or irritative stimuli from the chyme in the intestines.