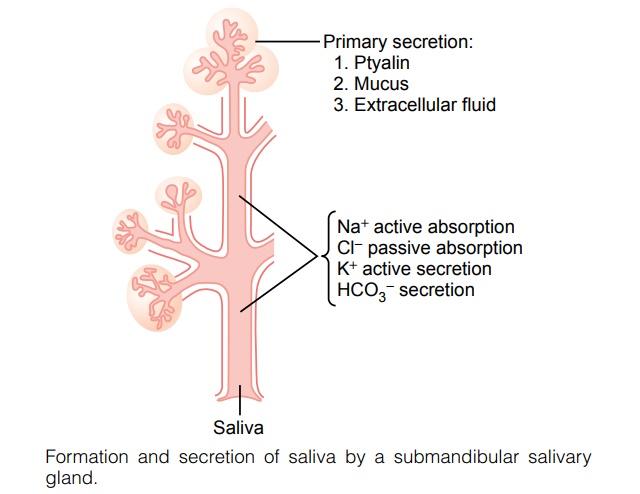 Salivary Glands; Characteristics of Saliva. The principalglands of salivation are the parotid, submandibular, and sublingual glands; in addition, there are many very small buccal glands.

Salivary Glands; Characteristics of Saliva. The principalglands of salivation are the parotid, submandibular, and sublingual glands; in addition, there are many very small buccal glands. Daily secretion of saliva normally ranges between 800 and 1500 milliliters, as shown by the average value of 1000 milliliters in Table 64–1. 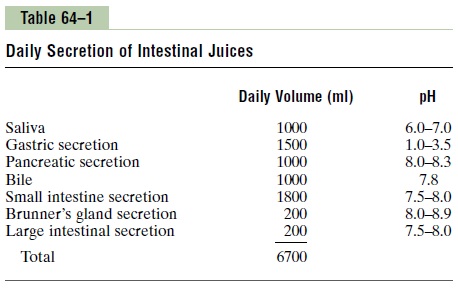 The parotid glands secrete almost entirely the serous type of secretion, while the submandibular and sublingual glands secrete both serous secretion and mucus. The buccal glands secrete only mucus. Saliva has a pH between 6.0 and 7.0, a favorable range for the digestive action of ptyalin.

Secretion of Ions in Saliva. Saliva contains especiallylarge quantities of potassium and bicarbonate ions. Conversely, the concentrations of both sodium and chloride ions are several times less in saliva than in plasma. One can understand these special concentra-tions of ions in the saliva from the following descrip-tion of the mechanism for secretion of saliva.

Figure 64–2 shows secretion by the submandibular gland, a typical compound gland that contains acini and salivary ducts. Salivary secretion is a two-stage operation: the first stage involves the acini, and the second, the salivary ducts. The acini secrete aprimarysecretion that contains ptyalin and/or mucin in a solu-tion of ions in concentrations not greatly different from those of typical extracellular fluid. As the primary secretion flows through the ducts, two major active transport processes take place that markedly modify the ionic composition of the fluid in the saliva. 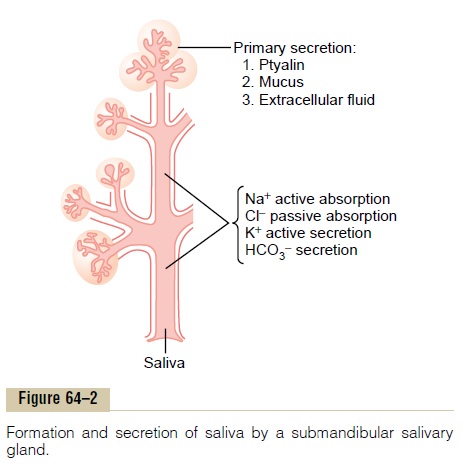 Second, bicarbonate ions are secreted by the ductal epithelium into the lumen of the duct. This is at least partly caused by passive exchange of bicarbonate for chloride ions, but it may also result partly from an active secretory process.

The net result of these transport processes is that under resting conditions, the concentrations of sodiumand chloride ions in the saliva are only about 15 mEq/ L each, about one seventh to one tenth their concen-trations in plasma. Conversely, the concentration of potassium ions is about 30 mEq/L, seven times as great as in plasma; and the concentration of bicarbonate ions is 50 to 70 mEq/L, about two to three times that of plasma.

During maximal salivation, the salivary ionic con-centrations change considerably because the rate of formation of primary secretion by the acini can increase as much as 20-fold. This acinar secretion then flows through the ducts so rapidly that the ductal reconditioning of the secretion is considerably reduced. Therefore, when copious quantities of saliva are being secreted, the sodium chloride concentration rises only to one half or two thirds that of plasma, and the potassium concentration rises to only four times that of plasma.

Function of Saliva for Oral Hygiene. Under basal awake con-ditions, about 0.5 milliliter of saliva, almost entirely of the mucous type, is secreted each minute; but during sleep, secretion becomes very little. This secretion plays an exceedingly important role for maintaining healthy oral tissues. The mouth is loaded with pathogenic bac-teria that can easily destroy tissues and cause dental caries. Saliva helps prevent the deteriorative processes in several ways.

First, the flow of saliva itself helps wash away patho-genic bacteria as well as food particles that provide their metabolic support.

Second, saliva contains several factors that destroybacteria. One of these is thiocyanate ions and another is several proteolytic enzymes—most important, lysozyme—that (a) attack the bacteria, (b) aid the thio-cyanate ions in entering the bacteria where these ions in turn become bactericidal, and (c) digest food parti-cles, thus helping further to remove the bacterial meta-bolic support.

Third, saliva often contains significant amounts ofprotein antibodies that can destroy oral bacteria, includ-ing some that cause dental caries. In the absence of salivation, oral tissues often become ulcerated and oth-erwise infected, and caries of the teeth can become rampant.