Figure 64–3 shows the parasympathetic nervous path-ways for regulating salivation, demonstrating that the salivary glands are controlled mainly by parasympa-thetic nervous signals all the way from the superior and inferior salivatory nuclei in the brain stem.

Figure 64–3 shows the parasympathetic nervous path-ways for regulating salivation, demonstrating that the salivary glands are controlled mainly by parasympa-thetic nervous signals all the way from the superior and inferior salivatory nuclei in the brain stem. 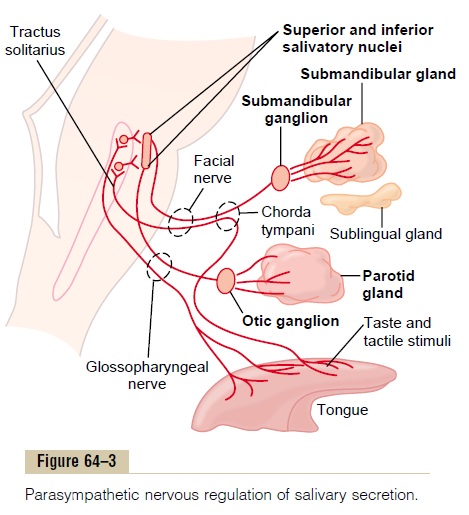 The salivatory nuclei are located approximately at the juncture of the medulla and pons and are excited by both taste and tactile stimuli from the tongue and other areas of the mouth and pharynx. Many taste stimuli, especially the sour taste (caused by acids), elicit copious secretion of saliva—often 8 to 20 times the basal rate of secretion. Also, certain tactile stimuli, such as the presence of smooth objects in the mouth (e.g., a pebble), cause marked salivation, whereas rough objects cause less salivation and occasionally even inhibit salivation.

Salivation can also be stimulated or inhibited by nervous signals arriving in the salivatory nuclei from higher centers of the central nervous system. For instance, when a person smells or eats favorite foods, salivation is greater than when disliked food is smelled or eaten. The appetite area of the brain, which partially regulates these effects, is located in proximity to the parasympathetic centers of the anterior hypothalamus, and it functions to a great extent in response to signals from the taste and smell areas of the cerebral cortex or amygdala.

Salivation also occurs in response to reflexes origi-nating in the stomach and upper small intestines—par-ticularly when irritating foods are swallowed or when a person is nauseated because of some gastrointestinal abnormality. The saliva, when swallowed, helps to remove the irritating factor in the gastrointestinal tract by diluting or neutralizing the irritant substances.

Sympathetic stimulation can also increase salivationa slight amount, much less so than does parasympa-thetic stimulation. The sympathetic nerves originate from the superior cervical ganglia and travel along the surfaces of the blood vessel walls to the salivary glands.

A secondary factor that also affects salivary secre-tion is the blood supply to the glands because secretion always requires adequate nutrients from the blood. The parasympathetic nerve signals that induce copious salivation also moderately dilate the blood vessels. In addition, salivation itself directly dilates the blood vessels, thus providing increased salivatory gland nutrition as needed by the secreting cells. Part of this additional vasodilator effect is caused by kallikrein secreted by the activated salivary cells, which in turn acts as an enzyme to split one of the blood proteins, an alpha2-globulin, to form bradykinin, a strong vasodilator.