Regulation of Pepsinogen Secretion and Phases of Gastric Secretion

Regulation of pepsinogen secretion by the peptic cells in the oxyntic glands is much less complex than regulation of acid secretion;

Gastric secretion is said to occur in three “phases” (as shown in Figure 64–7): a cephalic phase, a gastric phase, and an intestinal phase. 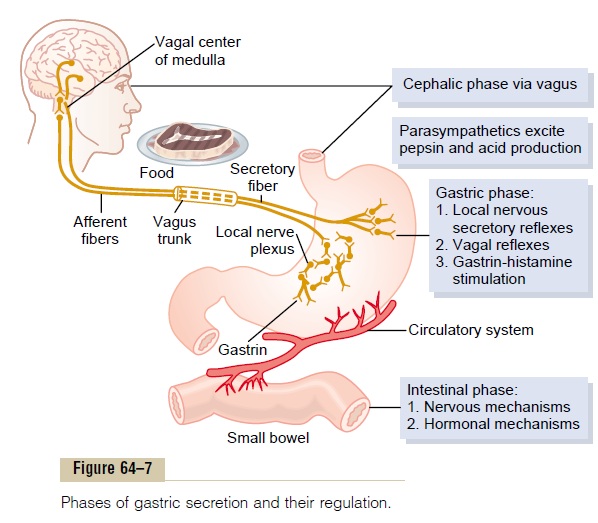 Cephalic Phase. The cephalic phase of gastric secretionoccurs even before food enters the stomach, especially while it is being eaten. It results from the sight, smell, thought, or taste of food, and the greater the appetite, the more intense is the stimulation. Neurogenic signals that cause the cephalic phase of gastric secretion origi-nate in the cerebral cortex and in the appetite centers of the amygdala and hypothalamus. They are trans-mitted through the dorsal motor nuclei of the vagi and thence through the vagus nerves to the stomach. This phase of secretion normally accounts for about 20 per cent of the gastric secretion associated with eating a meal.