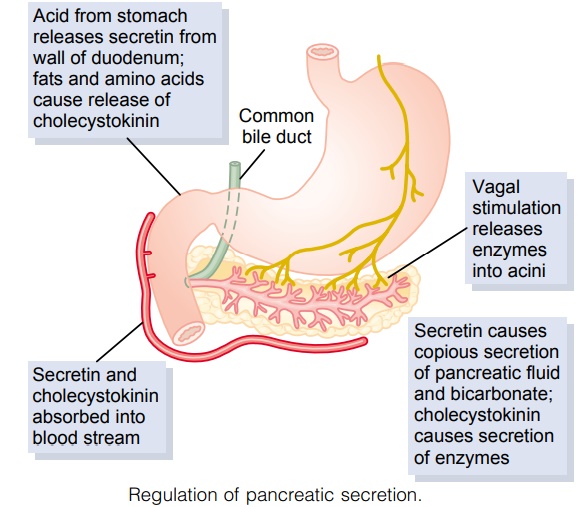 Basic Stimuli That Cause Pancreatic Secretion

1. Acetylcholine, which is released from theparasympathetic vagus nerve endings and from other cholinergic nerves in the enteric nervous system

2. Cholecystokinin, which is secreted by theduodenal and upper jejunal mucosa when food enters the small intestine

3. Secretin, which is also secreted by the duodenaland jejunal mucosa when highly acid food enters the small intestine

The first two of these stimuli, acetylcholine and cholecystokinin, stimulate the acinar cells of the pancreas, causing production of large quantities of pancreatic digestive enzymes but relatively small quantities of water and electrolytes to go with the enzymes. Without the water, most of the enzymes remain temporarily stored in the acini and ducts until more fluid secretion comes along to wash them into the duodenum. Secretin, in contrast to the first two basic stimuli, stimulates secretion of large quantities of water solution of sodium bicarbonate by the pancre-atic ductal epithelium.

Multiplicative Effects of Different Stimuli. When all the dif-ferent stimuli of pancreatic secretion occur at once, the total secretion is far greater than the sum of the secre-tions caused by each one separately. Therefore, the various stimuli are said to “multiply,” or “potentiate,” one another. Thus, pancreatic secretion normally results from the combined effects of the multiple basic stimuli, not from one alone.

Pancreatic secretion occurs in three phases, the same as for gastric secretion: the cephalic phase, the gastricphase, and the intestinal phase.Their characteristics areas follows.

Cephalic and Gastric Phases. During the cephalic phaseof pancreatic secretion, the same nervous signals from the brain that cause secretion in the stomach also cause acetylcholine release by the vagal nerve endings in the pancreas. This causes moderate amounts of enzymes to be secreted into the pancreatic acini, accounting for about 20 per cent of the total secretion of pancreatic enzymes after a meal. But little of the secretion flows immediately through the pancreatic ducts into the intestine because only small amounts of water and electrolytes are secreted along with the enzymes.

During the gastric phase, the nervous stimulation of enzyme secretion continues, accounting for another 5 to 10 per cent of pancreatic enzymes secreted after a meal. But, again, only small amounts reach the duo-denum because of continued lack of significant fluid secretion.

Secretin Stimulates Secretion of Copious Quantities of Bicarbonate Ions—Neutralization of Acidic Stomach Chyme. Secretin is a polypeptide, containing 27 aminoacids (molecular weight about 3400), present in an inactive form, prosecretin, in so-called S cells in the mucosa of the duodenum and jejunum. When acid chyme with pH less than 4.5 to 5.0 enters the duode-num from the stomach, it causes duodenal mucosal release and activation of secretin, which is then absorbed into the blood. The one truly potent con-stituent of chyme that causes this secretin release is the hydrochloric acid from the stomach.

Secretin in turn causes the pancreas to secrete large quantities of fluid containing a high concentration of bicarbonate ion (up to 145 mEq/L) but a low concen-tration of chloride ion. The secretin mechanism is especially important for two reasons: First, secretin begins to be released from the mucosa of the small intestine when the pH of the duodenal contents falls below 4.5 to 5.0, and its release increases greatly as the pH falls to 3.0. This immediately causes copious secre-tion of pancreatic juice containing abundant amounts of sodium bicarbonate. The net result is then the fol-lowing reaction in the duodenum:

Then the carbonic acid immediately dissociates into carbon dioxide and water. The carbon dioxide is absorbed into the blood and expired through the lungs, thus leaving a neutral solution of sodium chlo-ride in the duodenum. In this way, the acid contents emptied into the duodenum from the stomach become neutralized, so that further peptic digestive activity by the gastric juices in the duodenum is immediately blocked. Because the mucosa of the small intestine cannot withstand the digestive action of acid gastric juice, this is an essential protective mechanism to prevent development of duodenal ulcers.

Bicarbonate ion secretion by the pancreas provides an appropriate pH for action of the pancreatic diges-tive enzymes, which function optimally in a slightly alkaline or neutral medium, at a pH of 7.0 to 8.0. Fortunately, the pH of the sodium bicarbonate secre-tion averages 8.0.

Cholecystokinin—Its Contribution to Control of Diges- tive Enzyme Secretion by the Pancreas. The presenceof food in the upper small intestine also causes a second hormone, cholecystokinin, a polypeptide con-taining 33 amino acids, to be released from yet another group of cells, the I cells, in the mucosa of the duode-num and upper jejunum. This release of cholecys-tokinin results especially from the presence of proteoses and peptones (products of partial proteindigestion) and long-chain fatty acids in the chyme coming from the stomach.

Cholecystokinin, like secretin, passes by way of the blood to the pancreas but instead of causing sodium bicarbonate secretion causes mainly secretion of still much more pancreatic digestive enzymes by the acinar cells. This effect is similar to that caused by vagal stim-ulation but even more pronounced, accounting for 70 to 80 per cent of the total secretion of the pancreatic digestive enzymes after a meal.

The differences between the pancreatic stimulatory effects of secretin and cholecystokinin are shown in Figure 64–9, which demonstrates (1) intense sodium bicarbonate secretion in response to acid in the duo-denum, stimulated by secretin, (2) a dual effect in response to soap (a fat), and (3) intense digestive enzyme secretion (when peptones enter the duode-num) stimulated by cholecystokinin. 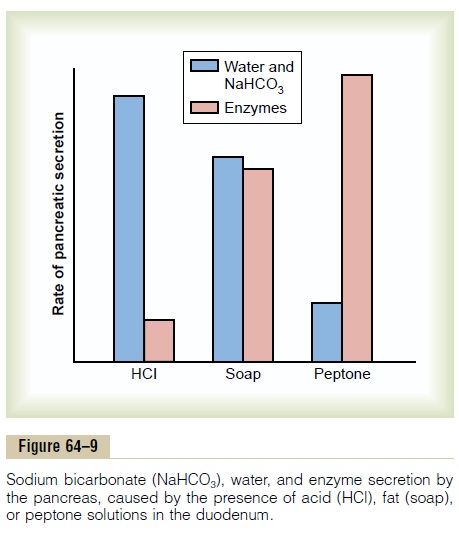 Figure 64–10 summarizes the more important factors in the regulation of pancreatic secretion. The total amount secreted each day is about 1 liter. 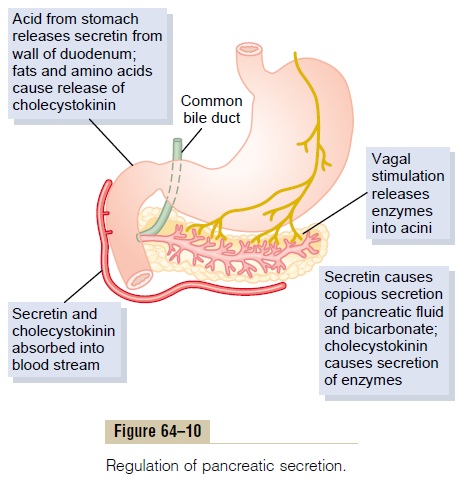