Secretion of Bile by the Liver; Functions of the Biliary Tree

One of the many functions of the liver is to secrete bile, normally between 600 and 1000 ml/day.

Secretion of Bile by the Liver; Functions of the Biliary Tree

One of the many functions of the liver is to secrete bile, normally between 600 and 1000 ml/day. Bile serves two important functions:

First, bile plays an important role in fat digestion and absorption, not because of any enzymes in the bile that cause fat digestion, but because bile acids in the bile do two things: (1) they help to emulsify the large fat particles of the food into many minute particles, the surface of which can then be attacked by lipase enzymes secreted in pancreatic juice, and (2) they aid in absorption of the digested fat end products through the intestinal mucosal membrane.

Second, bile serves as a means for excretion of several important waste products from the blood. These include especially bilirubin, an end product of hemoglobin destruction, and excesses of cholesterol.

Bile is secreted in two stages by the liver: (1) The initial portion is secreted by the principal functional cells of the liver, the hepatocytes; this initial secretion contains large amounts of bile acids, cholesterol, and other organic constituents. It is secreted into minute bilecanaliculi that originate between the hepatic cells.

(2) Next, the bile flows in the canaliculi toward the interlobular septa, where the canaliculi empty into ter-minal bile ducts and then into progressively largerducts, finally reaching thehepatic duct and commonbile duct. From these the bile either empties directlyinto the duodenum or is diverted for minutes up to several hours through the cystic duct into the gall-bladder, shown in Figure 64–11. 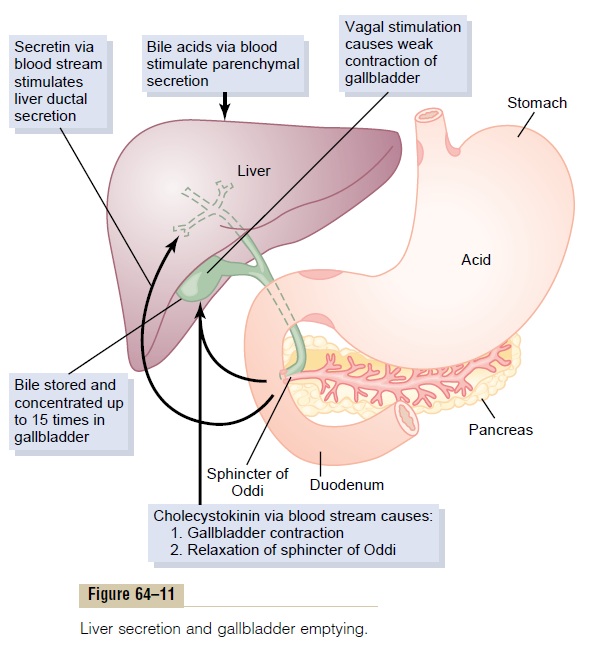 Composition of Bile. Table 64–2 gives the composition ofbile when it is first secreted by the liver and then after it has been concentrated in the gallbladder. This table shows that by far the most abundant substances secreted in the bile are bile salts, which account for about one half of the total solutes also in the bile. Also secreted or excreted in large concentrations arebiliru-bin, cholesterol, lecithin, and the usual electrolytes of plasma. 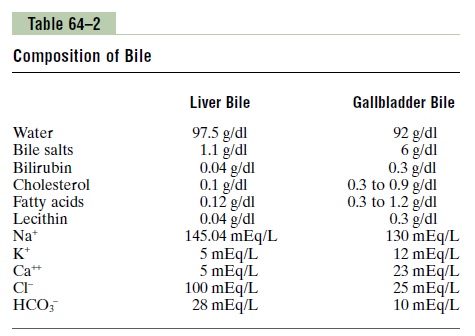 Function of Bile Salts in Fat Digestion and Absorption

The liver cells synthesize about 6 grams of bile salts daily. The precursor of the bile salts is cholesterol, which is either present in the diet or synthesized in the liver cells during the course of fat metabolism. The cholesterol is first converted to cholic acid or che-nodeoxycholic acid in about equal quantities. Theseacids in turn combine principally with glycine and to a lesser extent with taurine to form glyco- and tauro-conjugated bile acids. The salts of these acids, mainlysodium salts, are then secreted in the bile.

The bile salts have two important actions in the intestinal tract:

First, they have a detergent action on the fat parti-cles in the food. This decreases the surface tension of the particles and allows agitation in the intestinal tract to break the fat globules into minute sizes. This is called the emulsifying or detergent function of bile salts.

Second, and even more important than the emulsi-fying function, bile salts help in the absorption of(1) fatty acids, (2) monoglycerides, (3) cholesterol, and (4) other lipids from the intestinal tract. They do this by forming very small physical complexes with these lipids; the complexes are called micelles, and they are semi-soluble in the chyme because of the electrical charges of the bile salts. The intestinal lipids are “ferried” in this form to the intestinal mucosa, where they are then absorbed into the blood. Without the presence of bile salts in the intestinal tract, up to 40 per cent of the ingested fats are lost into the feces, and the person often develops a metabolic deficit because of this nutrient loss.

Enterohepatic Circulation of Bile Salts. About 94 per cent ofthe bile salts are reabsorbed into the blood from the small intestine, about one half of this by diffusion through the mucosa in the early portions of the small intestine and the remainder by an active transport process through the intestinal mucosa in the distal ileum. They then enter the portal blood and pass back to the liver. On reaching the liver, on first passage through the venous sinusoids these salts are absorbed almost entirely back into the hepatic cells and then are resecreted into the bile.

In this way, about 94 per cent of all the bile salts are recirculated into the bile, so that on the average these salts make the entire circuit some 17 times before being carried out in the feces. The small quantities of bile salts lost into the feces are replaced by new amounts formed continually by the liver cells. This recirculation of the bile salts is called theenterohepatic circulation of bilesalts.

If a bile fistula empties the bile salts to the exterior for several days to several weeks so that they cannot be reabsorbed from the ileum, the liver increases its pro-duction of bile salts 6- to 10-fold, which increases the rate of bile secretion most of the way back to normal. This demonstrates that the daily rate of liver bile salt secretion is actively controlled by the availability (or lack of availability) of bile salts in the enterohepatic circulation.

Role of Secretin in Helping to Control Bile Secretion. In addi-tion to the strong stimulating effect of bile acids to cause bile secretion, the hormone secretin that also stimulates pancreatic secretion increases bile secretion, sometimes more than doubling its secretion for several hours after a meal. This increase in secretion is almost entirely secretion of a sodium bicarbonate-rich watery solution by the epithelial cells of the bile ductules and ducts, and not increased secretion by the liver parenchymal cells themselves. The bicarbonate in turn passes into the small intestine and joins the bicarbonate from the pan-creas in neutralizing the hydrochloric acid from the stomach. Thus, the secretin feedback mechanism for neutralizing duodenal acid operates not only through its effects on pancreatic secretion but also to a lesser extent through its effect on secretion by the liver ductules and ducts.

Bile salts are formed in the hepatic cells from choles-terol in the blood plasma. In the process of secreting the bile salts, about 1 to 2 grams of cholesterol are removed from the blood plasma and secreted into the bile each day.

Under abnormal conditions, the cholesterol may pre-cipitate in the gallbladder, resulting in the formation of cholesterol gallstones, as shown in Figure 64–12. Theamount of cholesterol in the bile is determined partly by the quantity of fat that the person eats, because liver cells synthesize cholesterol as one of the products of fat metabolism in the body. For this reason, people on a high-fat diet over a period of years are prone to the development of gallstones. 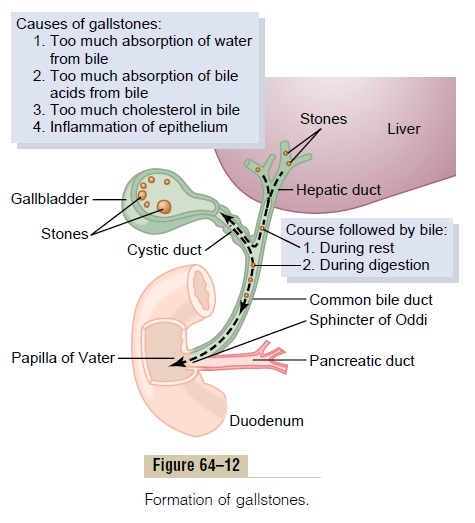 Inflammation of the gallbladder epithelium, often resulting from low-grade chronic infection, may also change the absorptive characteristics of the gallbladder mucosa, sometimes allowing excessive absorption of water and bile salts but leaving behind the cholesterol in the bladder in progressively greater concentrations. Then the cholesterol begins to precipitate, first forming many small crystals of cholesterol on the surface of the inflamed mucosa, but then progressing to large gallstones.