Characteristics of the Gastric Secretions

In addition to mucus-secreting cells that line the entire surface of the stomach, the stomach mucosa has two important types of tubular glands: oxyntic glands (also called gastric glands) and pyloric glands.

Characteristics of the Gastric Secretions

In addition to mucus-secreting cells that line the entire surface of the stomach, the stomach mucosa has two important types of tubular glands: oxyntic glands (also called gastricglands) and pyloric glands. The oxyntic (acid-forming) glands secrete hydrochloric acid, pepsinogen, intrinsic factor, and mucus. The pyloricglands secrete mainly mucus for protection of the pyloric mucosa from the stomach acid. They also secrete the hormone gastrin.

Secretions from the Oxyntic (Gastric) Glands 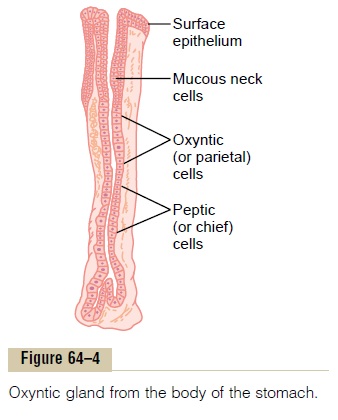 Basic Mechanism of Hydrochloric Acid Secretion. Whenstimulated, the parietal cells secrete an acid solution that contains about 160 millimoles of hydrochloric acid per liter, which is almost exactly isotonic with the body fluids. The pH of this acid is about 0.8, demonstrating its extreme acidity. At this pH, the hydrogen ion con-centration is about 3 million times that of the arterial blood. To concentrate the hydrogen ions this tre-mendous amount requires more than 1500 calories of energy per liter of gastric juice. 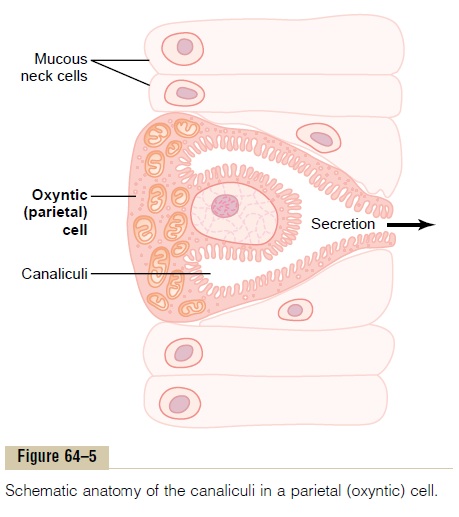 Figure 64–5 shows schematically the functional structure of a parietal cell (also called oxyntic cell), demonstrating that it contains large branching intra-cellular canaliculi. The hydrochloric acid is formed at the villus-like projections inside these canaliculi and is then conducted through the canaliculi to the secretory end of the cell.

Different suggestions for the chemical mechanism of hydrochloric acid formation have been offered. One of these, shown in Figure 64–6, consists of the following steps: 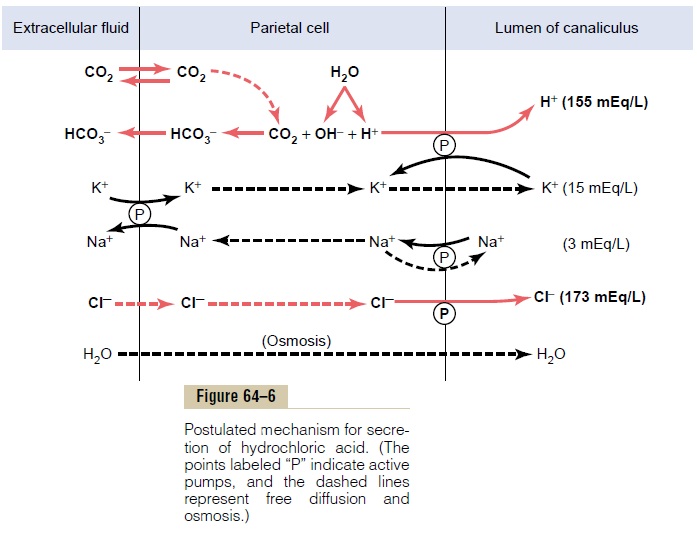 4.     Finally, carbon dioxide, either formed during metabolism in the cell or entering the cell from the blood, combines under the influence of carbonic anhydrase with the hydroxyl ions (from step 2) to form bicarbonate ions. These then diffuse out of the cell cytoplasm into the extracellular fluid in exchange for chloride ions that enter the cell from the extracellular fluid and are later secreted into the canaliculus.

Secretion and Activation of Pepsinogen. Several slightlydifferent types of pepsinogen are secreted by the peptic and mucous cells of the gastric glands. Even so, all the pepsinogens perform the same functions.

Pepsin functions as an active proteolytic enzyme in a highly acid medium (optimum pH 1.8 to 3.5), but above a pH of about 5 it has almost no proteolytic activity and becomes completely inactivated in a short time. Hydrochloric acid is as necessary as pepsin for protein digestion in the stomach;

Secretion of Intrinsic Factor. The substanceintrinsic factor,essential for absorption of vitamin B12 in the ileum, is secreted by the parietal cells along with the secretion of hydrochloric acid. When the acid-producing parietal cells of the stomach are destroyed, which frequently occurs in chronic gastritis, the person develops not only achlorhydria (lack of stomach acid secretion) but oftenalso pernicious anemia because of failure of maturation of the red blood cells in the absence of vitamin B12 stim-ulation of the bone marrow.