When a metal tip comes close to a conducting surface, electrons can tunnel from one to the other, in either direction.

When a metal tip comes close to a conducting surface, electrons can tunnel from one to the other, in either direction. The probability of tunneling depends exponentially on the distance apart. Surface contours can be mapped by keeping the current constant and measuring the height of the tip above the surface. This allows resolution of individual atoms on the surface being studied. This is the principle of the scanning tunneling microscope (Fig. 7.3). 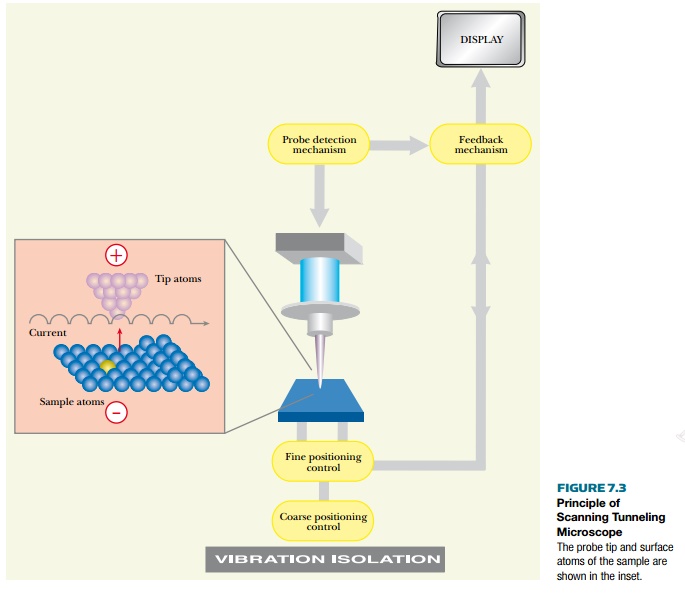 Atoms may also be moved using the STM. In 1989, in perhaps the most famous experiment in nanotechnology, D. M. Eigler and E. K. Schweizer fabricated the IBM logo by arranging 35 xenon atoms on a nickel surface. They chose nickel because the valleys between rows of nickel atoms are deep enough to hold xenon atoms in place, yet small enough to allow the xenon atoms to be pulled over the surface. To move xenon atoms, the STM tip was placed above a xenon atom, using imaging mode. Next, scanning mode was turned off and the tip lowered until the tunneling current increased severalfold (“fabrication mode”). The xenon atom was attracted to the STM tip and was dragged by moving the tip horizontally. The atom was deposited at its new location by reducing the tunneling current. Since then several diagrams have been made in the same way. Carbon monoxide man is shown in Fig. 7.4. 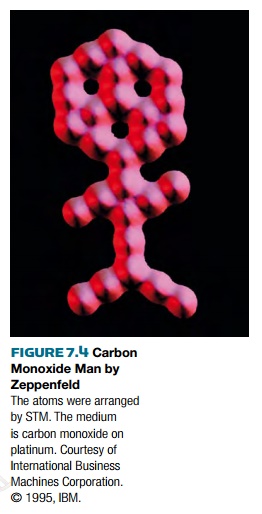 From a biological perspective, the weakness of STM is that it requires a conducting surface, in practice generally a metal layer of some sort. The atomic force microscope (see following section) has the advantage of not needing conductive material and has therefore been more widely applied in biology.