Carbon nanotubes are cylinders made of pure carbon with diameters of 1 to 50 nanometers. However, they may be up to approximately 10 micrometers long.

Carbon nanotubes are cylinders made of pure carbon with diameters of 1 to 50 nanometers. However, they may be up to approximately 10 micrometers long. Pure elemental carbon exists as diamond or graphite. In diamond, each carbon is covalently linked to four others forming a 3-D tetrahedral lattice that is extremely strong. In contrast, graphite consists of flat sheets of carbon atoms that form a hexagonal pattern. In the sheets of graphite, each carbon atom is covalently bonded to three neighbors and the sheets can slide sideways over each other, because there are no covalent linkages between atoms in different sheets.

To form a nanotube, a single sheet of graphite is rolled into a cylinder. The sheets may be rolled up straight or at an angle to the carbon lattice and may be of various diameters.

Depending on the diameter and the torsion, the nanotube may act as a metallic conductor or a semiconductor. Not surprisingly, nanotubes are now finding many uses in electronics, a topic beyond the scope of this book.

In biotechnology, nanotubes are just beginning to find applications. The critical issue is attaching other biomolecules, such as enzymes, hormone receptors, or antibodies, to the nanotube surface. One idea is to build biosensors where interaction of, say, an antibody with its target antigen will change the electrical behavior of the nanotube. Hence it should become possible to generate an electrical signal on detecting hormones, pathogens, pollutants, and so forth. 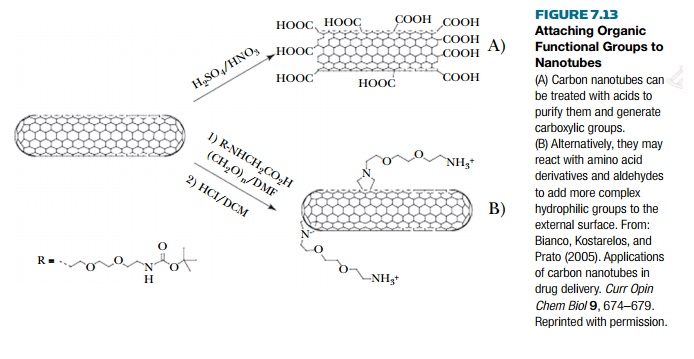 A major problem in attaching proteins is that the surface of carbon nanotubes is hydrophobic. One way to attach biomolecules is to first modify the surface by adding nonionic detergents, such as Triton X100. The hydrophobic portion of the detergent binds to the nanotube surface and the hydrophilic region can be used for binding of proteins. Alternatively, chemical reagents may be used that react with the carbon surface of the nanotube and generate side chains carrying reactive functional groups. Proteins can then be linked covalently by reaction with these (Fig. 7.13). Creation of devices by combining biological molecules with nanotubes is still in its infancy, but progress in this area is likely to be rapid.