In “classical” genetic engineering, the sequence of DNA is deliberately altered in order to generate new combinations of genetic information.

In “classical” genetic engineering, the sequence of DNA is deliberately altered in order to generate new combinations of genetic information. Even when major rearrangements are made, in order to function as genetic information, the DNA must remain as a base-paired double-stranded helix with an overall linear structure.

In nanoengineering, the objective is to make structures using DNA merely as a structural element, rather than to manipulate genetic information. DNA is attractive because the double helix is a convenient structural module. Moreover, its natural base-pairing properties can be used to link separate DNA molecules together. However, a critical requirement for assembling 3D structures is branched DNA. Although branched structures do form in biological situations (especially the Holliday junction involved in crossing over during recombination), they are not permanent or stable.

Cross-shaped DNA can be generated by mixing four carefully designed single strands with different sequences.  Each strand base-pairs with two of the other strands over half its length (Fig. 7.16). If sticky ends are included in the initial strands, it is possible to link the crosses together into  a two-dimensional matrix. The nicks can be sealed by DNA ligase if desired. The principles used in branching can be extended to three dimensions, and it is possible to build cubical DNA lattices.

The DNA double helix is about 2 nm wide with a helical pitch of about 3.5 nm. Hence it can be used to build nanoscale frameworks. These can be used for the assembly of other components, such as metallic nanowires or nanocircuits. Note that while DNA is flexible over longer distances, it is relatively rigid over nanoscale lengths, up to about 50 nm. 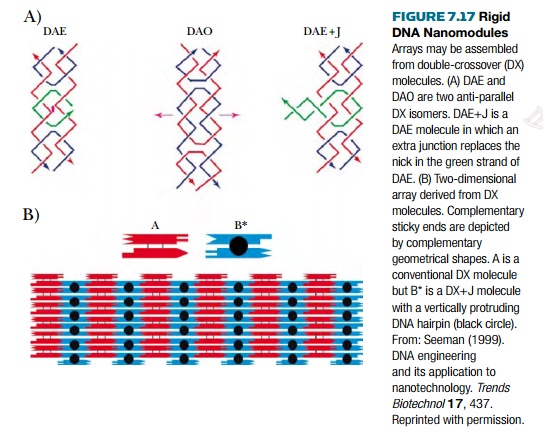 Such cross-shaped DNA molecules (and the 3D counterparts) have the drawback that the junctions are flexible and do not maintain rigid 90-degree angles. Rigid DNA components have been made by using double crossover (DX) DNA molecules. Two isomers of antiparallel DX DNA exist, with an odd (DAO) or even (DAE) number of half-turns between the crossover points (Fig. 7.17). (Double crossover molecules with parallel strands also exist, but behave poorly from a structural viewpoint.) DAE or DAO units can be assembled into a rigid array by providing appropriate sticky ends. It is possible to replace the central, short DNA strand of the DAE structure with a longer protruding strand of DNA (DAE+J). This allows assembly of branched structures.

What is the purpose of building arrays and 3D structures from DNA? Perhaps the most plausible use suggested so far is to use the DNA as the framework for assembling nanoscale electronic circuits. So far, normal, unbranched DNA has been used as a scaffold to create linear metallic nanowires. Various metals (gold, silver, copper, palladium, platinum) have been used to coat the DNA, and diameters range from 100 nm down to 3 nm. Eventually, it should be possible to put together these two approaches and build circuits from metal-covered 3D DNA structures.